Please ensure Javascript is enabled for purposes of website accessibility
Log In Help Join The Motley Fool
Free Article Join Over 1 Million Premium Members And Get More In-Depth Stock Guidance and Research
By Daniel B. Kline - Jan 6, 2015 at 6:53PM

It's not just how many customers join but how many stay that matters.

Amazon(AMZN -2.78%) signed up 10 million new customers for a one-month free trial of its Prime service over the holiday season, but that's not the reason the company and its shareholders should celebrate.

More important than the number of signups is the fact that Amazon converted about seven in 10 free trial participants into paying Prime members, according to research from Consumer Intelligence Research Partners. That's a stunningly high conversion rate, likely helped along by the fact that the free period turned into a $99, 12-month membership unless customers specifically chose to opt out.

CIRP bases its numbers on an ongoing analysis of Amazon customer behavior and the research, GeekWire reported, suggests that no matter how people become members, they are likely to stick around. The research firm estimates that about 84% (roughly six million) of these customers will renew their membership for a second year with some of those renewals likely occurring due to the fact that Prime membership auto-renews.

Even though leaving requires opting out, these retention rates are phenomenal, and they make it clear that Prime remains a good value even though its core offering of free two-day shipping has become less relevant given that books, movies, and TV are now often delivered in digital form.

How the free trials work
Amazon offers 30-day free Prime trials to anyone with a valid credit card. Since Amazon has over 240 million credit cards on file but only 40 to 50 million Prime subscribers worldwide, according to Re/Code, it has a fertile base of prospective customers. Signing up for a free trial is incredibly easy -- just a couple of clicks from the signup screen -- but once you take Amazon up on the free offer, you have to opt out at the end of the month. Otherwise, the trial automatically converts to a paid membership. Amazon does not hide this fact and includes the following text prominently on the signup page:

While you won't be charged for your free trial, you will be automatically upgraded to a paid membership plan at the end of the trial period. For help turning off your Amazon Prime membership renewal, go to Turn Off Your Amazon Prime Membership Renewal.

If a customer just wants to take advantage of the trial, he or she can immediately change settings so the membership ends when the free period expires. Amazon also allows customers to have a full refund on a paid membership if the service has not been used for free shipping once the paid period kicks in.

Amazon makes it easy to leave, but customers are choosing to stay. The company is not simply taking advantage of an opt-out system, it's actually delivering a premium service people want.

Why this matters
Amazon has worked hard to make Prime a good value, including rolling out free video and music services and offering a number of product exclusives and special deals to members. These include a new, low-cost line of products (which began with Amazon-branded diapers) and a $99 discount on the company's Echo digital assistant.

And that has led Prime to grow steadily, which is good for the online retailer since Prime subscribers spend almost $538 a year versus the $320 per year spent by non-subscribers, according to a study conducted by RBC. The survey, conducted in June 2014, was based on the answers of just over 2,000 Amazon.com shoppers -- 708 Prime and 1,357 non-Prime customers. The chart below shows that those who spend less than $50 per 90 days with the online retailer are less likely to join Prime. Once the expenditure over that time period goes over $50, more consumers see the value in paying for a subscription. 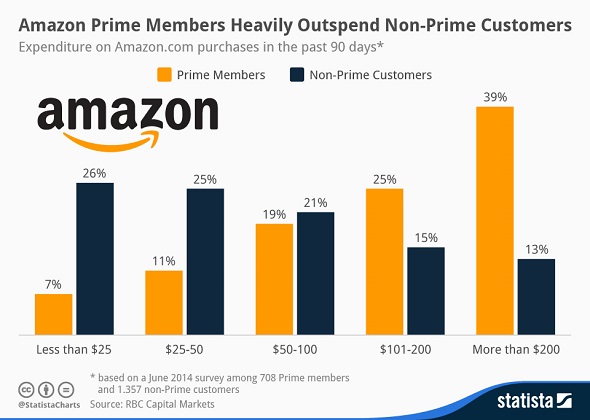 Once customers get a taste of Prime, they seem to like it. That makes them loyal Amazon buyers who spend even more.

Keep the free trials coming
While there is no standard for judging conversion rates from a free trial, and Amazon is somewhat unique among online retailers, a 70% conversion rate with 84% year two retention is spectacular.

Amazon's fastest path to increasing sales is signing up more people for Prime. Once someone joins the service, he or she becomes more invested in the company. In the past, that has led to increased revenue per customer as the chart above shows. Going forward, it could lead to people buying Amazon set-top boxes, tablets, e-readers, and other devices which could convert into even greater sales.

More Prime members means a stronger Amazon, and this holiday shows that despite last year's price increase from $79 to $99 a year, Prime still has a lot of room to grow.