Whenever I read or watch financial media coverage of oil prices lately, the image that comes to mind is a bunch of kids who just ate half their weight in candy, washed it down with a gallon of Red Bull, and then run around the playground at warp speed. They both move so fast and sporadically that is almost impossible to keep up with them.

Here is just a small example of headlines that have been found at major financial media outlets in just the past week:

What is absolutely mind-boggling about these statements is that these sorts of predictions are accompanied with the dumbest thing that anyone can say about commodities: This time it's different.

No it's not, and we have 150 years worth of oil price panics to prove it.

Oil Prices: From one hysterical moment to another
The thought of oil prices moving 15%-20% is probably enough to make the average investor shudder. The assumption is that when a move that large happens, something must be wrong with the market that could change your investment thesis. Perhaps the supply and demand curves are a little out of balance, maybe there is a geopolitical conflict that could compromise a critical producing nation.

Or maybe, just maybe, it's just what oil prices do over time. 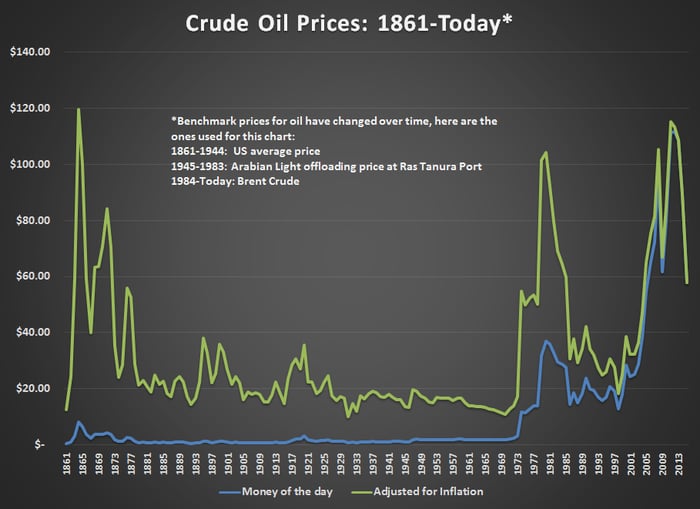 Also keep in mind, these are just the change in annual price averages. So it's very likely that these big price pops and plunges are even more frequent than what this chart shows.

Investing in energy takes more stomach than brains
It's so easy to fall into the trap of basing all of your energy investing decisions on the price of oil and where it will go. On the surface it makes sense because the price of that commodity is the lifeblood of these companies. When the price of oil drops as much as 50% over a few months, it will likely take a big chunk out of revenue and earnings power.

As you can see from this data, though, the frequency of major price swings is simply too much for the average investor to try to time the market. Heck, even OPEC, the organization that is supposed to be dedicated to regulating oil prices through varying production is bad at predicting which way oil prices will go.

The reality is, being an effective energy investor doesn't require the skill to know where energy prices are headed -- nobody has that skill anyways. The real determining factor in effectively investing in this space is identifying the best companies and holding them through the all the pops and drops.

Let's just use an example here. In 1980, the price of oil -- adjusted for inflation -- was at a major peak of $104. From there it would decline for five straight years and would never reach that inflation adjusted price again until 2008. For 15 of those 28 years oil prices were one-third what they were in 1980. If we were to use oil prices as our litmus test, then any energy investment made in 1980 would have been a real stinker.

However, if you had made an investment in ExxonMobil in 1980 and just held onto it, your total return -- share price appreciation plus dividends -- would look a little something like this. 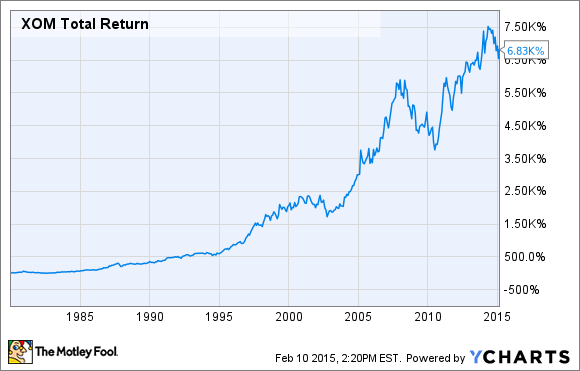 So much for all those pops and drops.

What a Fool believes
The entire oil and gas industry has pretty much maneuvered from crisis to crisis since its inception, we just seemed to have forgotten that fact up until a few months ago because we had two years of relative calm. The important thing to remember is that the world's energy needs grow every day and the companies that produce it will invest and make more money off of it when prices are high and less money when prices are low.

Based on the historical trends of oil, analysts will continue to go on their sugar-high proclamation streak and say that oil will go to absurd highs and lows so they can get their name in a financial piece, and they will try to tell you that this time it's different because of xyz. We know better, and they should as well.

There's 150 years of evidence just waiting to prove them wrong.