What: Shares of VASCO Data Security International (NASDAQ:OSPN) surged nearly 14% at the open on Tuesday morning after the company reported its fourth-quarter earnings. Within an hour, the stock collapsed, falling more than 11% below the previous day's close. As of noon, the stock had recovered from this drop, up slightly from the previous close. 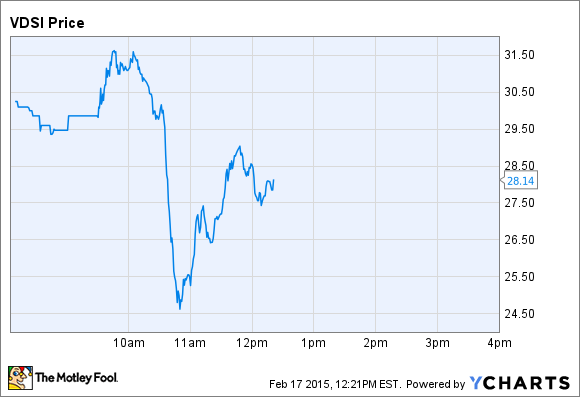 Now what: Shares of VASCO nearly quadrupled in 2014, and the stock now trades at a lofty six times sales and nearly 30 times earnings. While growth in 2014 was strong, the company suffered revenue and earnings declines in both 2012 and 2013, and while the company has been profitable in each of the past 10 years, operating margins have been erratic.

VASCO's earnings results were unambiguously positive, but the market's machinations, sending the stock up, then down, then up again, all by noon, could be the result of both a high valuation and uncertainly over whether the positive results will prove sustainable. VASCO's guidance in the past has missed the mark, with revenue coming in well below the company's expectations in both 2012 and 2013. Investors considering any stock should never take management's predictions as fact.