Please ensure Javascript is enabled for purposes of website accessibility
Log In Help Join The Motley Fool
Free Article Join Over 1 Million Premium Members And Get More In-Depth Stock Guidance and Research
By Evan Niu, CFA - Feb 20, 2015 at 11:55AM

Carl Icahn believes that Apple can sell $37.5 billion worth of full-sized Apple TV sets by 2017. That's just way too optimistic, even for the Mac maker.

Carl Icahn is at it again. The activist investor has penned another letter on why he thinks Apple (AAPL 4.08%) is significantly undervalued at current prices.

In October, Icahn pegged a whopping $203 per share valuation on Apple, proclaiming that shares were trading at a 50% discount at the time. This time around, he's boosted his valuation to $216 per share. It's worth pointing out that these figures aren't forward-looking price targets -- they're what Icahn believes Apple is worth in the present.

However, there's one peculiar aspect of the model that Icahn and his team have put together: Apple TV.

Time is not on Icahn's side
To be clear, when Icahn wrote his open letter to Tim Cook in October, his estimates similarly featured an Apple TV. These estimates haven't changed, but investors continue to progress closer to when Icahn expects Apple to launch a full-sized UltraHD TV. Icahn believes that Apple will launch its TV in fiscal 2016.

The billionaire investor then expects Apple to sell 12 million Apple TV units in fiscal 2016, growing to 25 million units in fiscal 2017. If all goes according to Icahn's model, then that would translate into an incredible $37.5 billion in Apple TV revenue for fiscal 2017. That's an average selling price of $1,500. Apple's fiscal 2016 starts this October, so we would be talking about a potential launch on the horizon.

Simply put, Icahn's hopes for Apple's TV business are too optimistic. Not even Apple can build a nearly $40 billion business from scratch in just 2 years.

A trip down memory lane
Let's look at some historical context. Of all the products that Apple has ever made, only one has ever grown to $37.5 billion in annual sales or larger: iPhone. It wasn't until 2011 that Apple's smartphone crossed that threshold, four years after its launch.

Even the iPad, which remains Apple's most quickly adopted new product category, has yet to clear $37.5 billion in annual revenue. It came very close, briefly surpassing $35 billion in trailing-12-month sales in 2013 (three years after launch), but tablets are hitting a bit of a speed bump right now as consumers are still trying to determine the appropriate upgrade cycles. 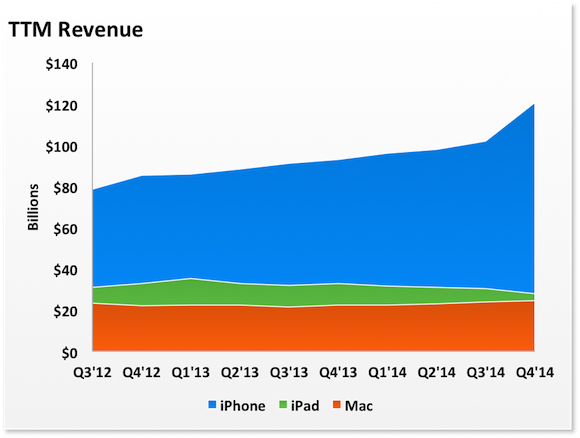 Even the Mac, which has been around for over three decades, has never hit $25 billion in TTM revenue. How realistic is it then for Icahn to believe that a product that has never been confirmed or announced can hit $37.5 billion in revenue by fiscal 2017?

A tale of 4 markets
Each of these product categories has different characteristics in terms of average selling prices, adoption, and upgrade cycles. The smartphone market is easily the largest by far in terms of unit volumes. Tablets are enjoying a renaissance, while the PC market is starting to stabilize after some contractions.

The market for smart TVs is expected to approach 200 million this year, according to Statista, making it the smallest of the four in terms of units.

Smartphones are easily the most frequently upgraded category here, thanks in part to carrier subsidies (which are on the decline) and continued performance gains each year. It also helps that people use their smartphones constantly, allowing users to get more value out of regular upgrades. The tablet upgrade cycle remains to be seen, as tablets are likely the least-used of these three categories. PCs have been around for quite a while, and performance gains are fairly modest these days, so consumers don't have much reason to upgrade their PCs as often.

As far as the TV market goes, it's the oldest of the bunch. TVs are a widely adopted and mature product category, and technological advances don't necessarily drive upgrades. For example, plasma TVs have been on the decline for years, with the market transitioning to LED-LCDs TVs, but the shift has taken a long time due to the lengthy upgrade cycles. Let's not even talk about 3D-TVs.

Additionally, since no company has created a viable mainstream platform out of TVs (yet), competition in this space has devolved to commoditized hardware. The subsequent price competition quickly eats into margins.

Back to Apple
While low-margin markets generally don't appeal to Apple, if it could create an Apple TV platform with a revolutionary interface, then it could exercise pricing power and maintain margins. But the real question is whether Apple could catalyze adoption of smart TVs, and/or meaningfully drive an upgrade cycle.

Meanwhile, Apple will be focused on the Apple Watch business as it enters the wearables market. That also calls into question the timing of Icahn's prediction. Apple doesn't enter new categories very often -- iPod in 2001, iPhone in 2007, iPad in 2010, Apple Watch in 2015. It would be uncharacteristic of the company to jump head first into two new categories within such a short period of time.