What traits do you need to be a great investor?

Wharton professor Jeremy Siegel's 2005 book The Future for Investors has an amazing statistic that stresses an important one: The ability to sit on your hands and do literally nothing.

The S&P 500 contains (surprise) 500 companies. But it's constantly changing. Companies get booted from the index, acquired by competitors, and go out of business. Standard & Poor's needs to replace old stocks with new ones.

Since its beginning in 1957, almost 1,000 companies have been removed from the index, and another 1,000 new companies added.

Siegel calculated how the index would have performed if, rather than replacing old companies with new ones, investors had just stuck with the original components, letting dying companies die and reinvesting proceeds from buyouts into the surviving S&P 500 companies.

"Those who bought the original 500 firms and never sold any of them outperformed not only the world's most famous benchmark stock index but also the performance of most money managers and actively managed equity funds," Siegel writes.

But if you stuck with the original 500 components, letting dying companies die and reinvesting proceeds from companies that were bought out into the surviving companies (there were 125 of them left by 2003), you earned 11.3% a year.

And the normal S&P 500 index required teams of analysts at Standard and Poor's deciding what new companies to replenish the index with. The survivor's portfolio required no analysis whatsoever, by anyone. You just bought 500 companies in 1957 and let the chips fall where they may.

That could have been a fluke. Things might be different over the next 50 years.

But there's a good explanation for the results.

"I do not deny that these new firms that have been added to the S&P 500 Index drive the creative destruction process that stimulates economic growth," he writes. "But on the whole, these new firms did not serve investors well."

Older surviving companies tend to be those likely to be around in the future, too. Their age is a sign of robustness and adaptability.

Nassim Taleb describes this in his book Antifragile:

When you see a young and an old human, you can be confident that the younger will survive the elder. With something nonperishable, say a technology, that is not the case ...

My friend Patrick O'Shaughnessy shows this with a chart of industry returns since 1963. Boring old consumer staples did the best, by far. Exciting new technology did the worst, by far: 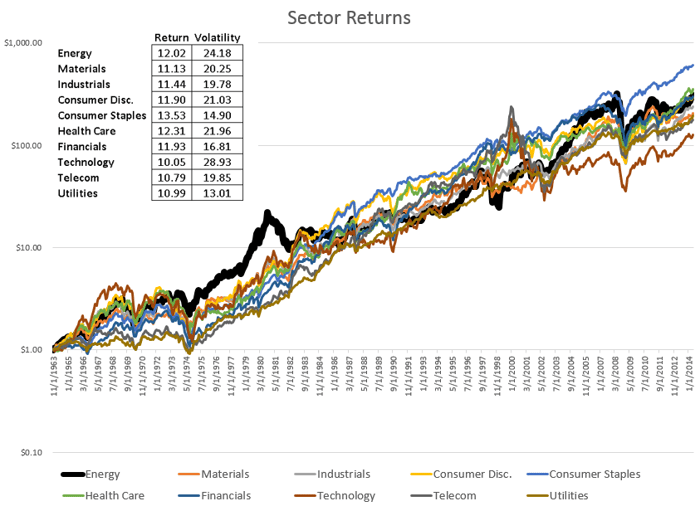 But the biggest takeaway here is the power of patience and inactivity.

Siegel's data is a good example of how the insatiable thirst to buy, sell, and fiddle with a portfolio can lead to lower long-term returns. Even in what appears to be a passive portfolio like the S&P 500, analysts are constantly thinking about what stocks to get rid of and what to replace them with. It sounds smart, but it often comes at the cost of performance.

As Warren Buffett put it, "The stock market is designed to transfer money from the active to the patient."