As a sector, technology isn't particularly known for dividends. Indeed, many of the most exciting technology stocks don't pay a dividend at all. Assuming they're profitable (an assumption that doesn't always hold), technology companies often funnel their cash back into their business rather than pay shareholders a dividend.

But there are exceptions, including Apple (NASDAQ:AAPL), Intel (NASDAQ:INTC), and Cisco (NASDAQ:CSCO). Below, three Motley Fool contributors offer up their picks for the best dividend-paying tech stocks.

Joe Tenebruso (Apple):You'd be forgiven if you've previously overlooked Apple as a dividend stock. The tech titan has been the epitome of growth stock over much of the last decade, with its surging revenue and incredible earnings growth over that time. More recently, many value-focused investors have taken an interest in the company because of its low price-to-earnings and price-to-cash flow multiples. However, I believe much of Apple's future returns will come via its dividend, which should have the stock popping up on more income investors' radars in the years ahead.

Although it's true that Apple's current dividend yield is lower than some other tech dividend payers, that's mostly because of share price appreciation rather than a minuscule payout. 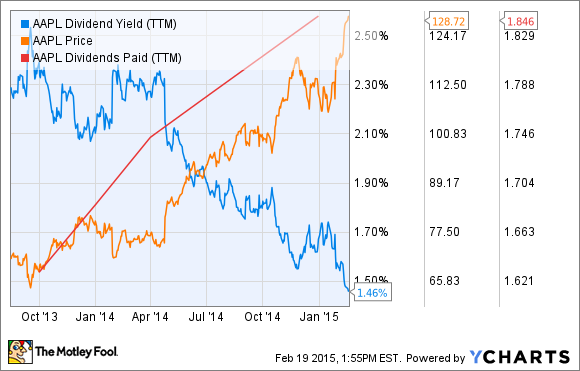 In fact, when combined with its massive share repurchases, Apple's capital return program is the largest in history.

The reason Apple's dividend will drive a large portion of its shareholders' returns going forward is that I believe Apple's payout is set to grow substantially in the years ahead. Apple's incredible free cash flow rang in at approximately $60 billion over the last 12 months, while dividends paid came in at slightly over $11 billion. Once Apple's share buyback program runs its course -- and especially if Apple's share price continues to surge -- management may tilt its capital return program more toward dividends and could easily double its dividend payout should it so choose.

Either way, between share price appreciation, share buybacks, and a growing dividend (which has already increased 24% since Apple reinitiated its dividend in July 2012), Apple appears poised to deliver strong total returns to its shareholders in the years ahead.

Anders Bylund (Intel): This is not the perfect dividend stock -- not by a long shot. But Intel's stock just might offer the perfect balance between potential share price gains and a solid payout. What's more, Intel is back to boosting its quarterly payouts after a too-long pause.

If you held Intel shares over the weekend, you qualified for a $0.24 payout per share in early March. That's a modest 6.7% increase from the year-ago rate, or any dividend paid since the third quarter of 2012.

That's how long Intel's payouts were stuck in limbo. It's 10 straight quarters at the exact same payout. Intel was conserving its cash for other projects, such as a massive investment in chip-making infrastructure. The company is getting ready for a strong push into mobile computing and the Internet of Things, and these huge market opportunities don't come cheap.

But the big investments have largely been made, and Intel is ready to shovel cash into shareholder pockets again. Dividend increases are back, and I expect them to stick around for several years. Intel also has a fresh $20 billion buyback authorization at its disposal, in case the stock becomes insanely undervalued again. Intel isn't exactly expensive today, at just 14.5 times trailing earnings, but the P/E ratio has dipped into the single digits in recent years. 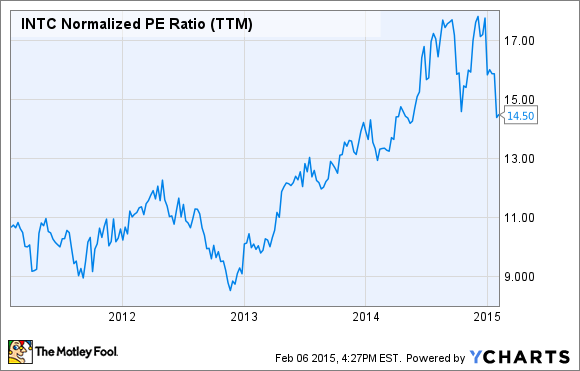 I own Intel myself, because the company knows how to stay relevant through thick and thin. Buy on the dips, like I did in 2012. And I'm not complaining about that generous 2.9% dividend yield either -- especially since the payout is primed to go even higher over the next few years.

Sam Mattera (Cisco): For most of the last five years, the only reason to own Cisco has been its dividend. While the networking giant has paid a reliable, and gradually increasing, dividend since 2010, the stock has been a frequent underperformer.

Cisco remains a reliable dividend payer, but its business is finally starting to show signs of improvement. Earlier this month, it reported a better-than-expected quarter, handily beating analyst expectations for both revenue and earnings. Cico's server division is performing admirably, and the company appears to be benefiting from widespread trends in the broader technology space, in particular, the increasing prevalence of cloud computing.

Cisco's cash balance now stands at around $68 billion, which should allow it to continue paying a dividend for the foreseeable future. In addition to its earnings, the company announced that it would raise its dividend yet again, up to $0.21 per share from $0.19 -- which, at current levels, gives it a yield around 2.90%. Cisco isn't the most exciting technology company, but given its commitment to capital returns, and its flourishing business, it has to be one of the best dividend payers in the technology sector.