Everybody loves a good bargain, whether you're willing to stand in the freezing cold waiting for the doors to open on Black Friday -- or Thursday, as is increasingly becoming the case -- or hunting down rock-bottom prices at garage sales. It's much the same in the investing world, and scooping up companies on the cheap that have fallen out of favor with the market can be fun. It can also be dangerous, like trying to catch a falling knife.

One such company that has been riding the struggle bus during the last couple of months is Caterpillar (NYSE:CAT). Is it finally a good buy for value investors? 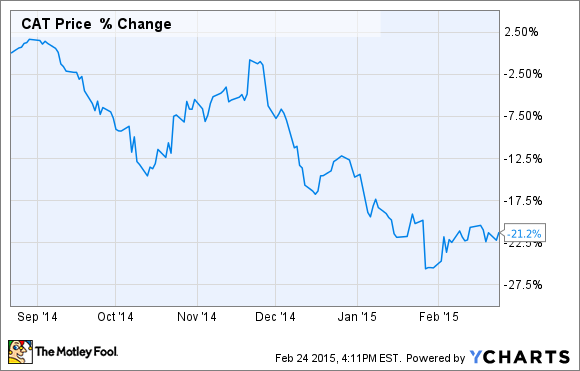 The good
Let's kick this off with a look at the positive aspects of Caterpillar and its business. Caterpillar has a strong economic moat due to its enormous global dealership network that enables consumers to maximize uptime/usage on equipment. It also continues to restructure its supply chain to reduce costs. Further, Caterpillar is essentially the largest or second-largest seller of any product it manufactures, which is impressive.

On top of having a well-known brand, strong competitive advantage with its dealership network, and a portfolio of valuable products, Caterpillar knows how to take care of its shareholders.

Despite sales and revenue declining last year, Caterpillar still dished value back to shareholders at a high rate. Consider that Caterpillar repurchased a staggering $4.2 billion of its stock, and dished out $1.6 billion in dividends, even increasing the quarterly payout by 17%. When throwing those two metrics on a graph, you want to see an "X" form with shares outstanding declining while the dividend trends higher – a great sign for value being returned to shareholders. 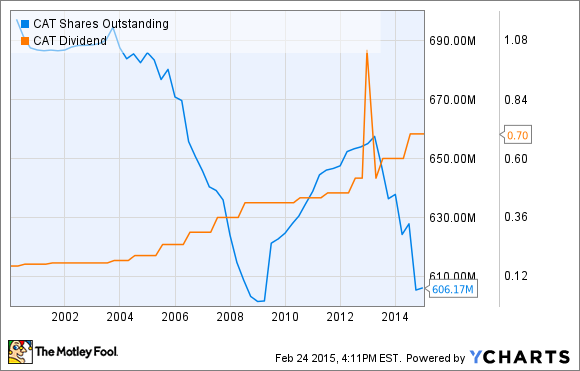 Even with the bump in shares outstanding in 2010-2012 -- which management is addressing -- you can see the clear trend, which shows more value being returned to shareholders. That's pretty much where the good news ends, so let's look at the flip side -- the bad news.

The bad
While covering Caterpillar's fourth quarter, I came across a quote from Chairman and Chief Executive Officer Doug Oberhelman that was honest and depressing at the same time.

The recent dramatic decline in the price of oil is the most significant reason for the year-over-year decline in our sales and revenues outlook. Current oil prices are a significant headwind for Energy & Transportation and negative for our construction business in the oil producing regions of the world. In addition, with lower prices for copper, coal and iron ore, we've reduced our expectations for sales of mining equipment. We've also lowered our expectations for construction equipment sales in China. While our market position in China has improved, 2015 expectations for the construction industry in China are lower.

There isn't really a better way to describe the troubles and gloomy 2015 that Caterpillar faces than with that quote. Unfortunately, to take it a step further, there are issues that Caterpillar and its investors face outside of its typical business realm.

The ugly
A recent black eye is threatening to become a serious problem for Caterpillar's management. The company is facing a federal grand-jury investigation in Illinois involving cash transfers within the company regarding railcar repairs. In addition to that issue, the IRS is also poking and prodding the heavy-equipment manufacturer. In fact, if the IRS gets its way, Caterpillar will be left with a bill adding $1 billion in taxes and penalties to the company's 2007-2009 tax years. With a growing list of negative probes and investigations, it makes being a Caterpillar investor even more daunting.

Right now Caterpillar's metrics suggest that the company is trading on the cheap, with a price to book of 3.0, price to cash flow of 6.5, and price to sales of 1.0. However, even with a price to earnings of about 14, there just doesn't appear there will be any improvement for Caterpillar's business for another year, at least. Long-term shareholders may very well be rewarded when its business does turnaround, but you can probably get Caterpillar at a better price if if you wait, or find a company with better growth prospects overall.