Main Street Capital Corp. (NYSE:MAIN) posted relatively strong results to end 2014, but because its press release comes out before its annual reports, it was prudent to withhold judgment until we could look under the hood.

With the annual report now in hand, we can take a careful look at some of its investments to get a sense for how its portfolios performed during the final quarter of 2014.

Nonaccrual assets
Main Street Capital places investments on nonaccrual when a loan or debt security is 90 days or more past due and it does not expect the company to service its debts. As a reminder, nonaccrual policies are not standardized throughout the business development company industry, so knowing the specifics behind the policy is important.

The table below shows the five nonaccrual companies in the portfolio as of Dec. 31, 2014.

Figures are in thousands of dollars, except for the per-share impact of non-accruals. Data from Main Street Capital's annual report.

The new nonaccrual this report was Clarius BIGS LLC, a "prints & advertising film financing" business that was paying interest on the order of 12% paid in kind. This loan should have come due on Jan. 5, 2015. We'll have to see how it pans out, but my guess is that Main Street will probably realize the reduced mark in the current quarter, as it the loan matured less than a week after the last quarter ended.

It's likely UniTek Global was the company Main Street identified as moving back off nonaccrual. The lenders took control of the company, and debt was swapped at a discount for equity. Main Street Capital will probably realize a loss on this investment in the current quarter because it didn't emerge from bankruptcy until after the prior quarter ended (Jan 13, 2015).

Portfolio companies to watch more closely
In addition to nonaccruals, Main Street Capital has a handful of assets that should be watched closely for deterioration in future quarters. These investments have been marked substantially below cost, and could represent future nonaccruals should their conditions weaken further. Not surprisingly, many are oil and gas companies, or in industries negatively affected by lower oil prices.

This list is admittedly subjective; two different people could comb through and find concern with completely different credits. In general, I included most energy companies, even if the marks were only modestly below cost (Encap Energy Fund, for example), given that falling energy prices will negatively affect a borrower's ability to repay. 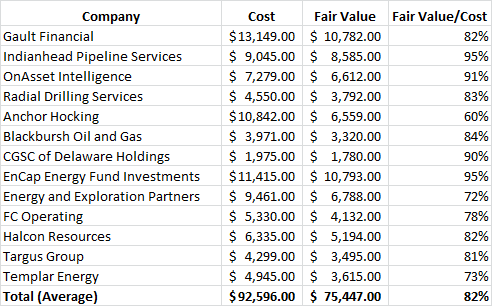 Figures are in thousands of dollars. Data from Main Street Capital's annual report.

Since many of these companies are in Main Street Capital's middle market portfolio (which is marked based on broker quotes), this list might include companies that are performing and will continue to perform, but which are currently perceived as lower-quality risks in the loan market. To put loan prices in perspective, the average leveraged loan in the S&P/LSTA 100 index traded at about $0.95 on the dollar at the end of 2014.

Notably, Main Street Capital's credit quality metrics for its lower middle market portfolio did not show a considerable change from the same quarter last year -- 10% of lower middle market investments are performing below expectations vs. 9.2% as of December 2013. The bulk of the depreciation came from market-related write downs in its middle market loan book.

Companies in this table make up about 5% of the company's total portfolio investments at fair value, as of Dec. 31, 2014.

I should point out that though these tables can appear menacing, appreciation helps paper over depreciation. As a whole, Main Street Capital's portfolio is currently marked at an 8% premium to its cost.

Growing into a better-priced market
Main Street Capital is in position to raise capital with stock issuance in the coming quarters. Currently operating at about 0.8 to 1 leverage, the company will have to raise equity if it wishes to expand its balance sheet.

And with net investment income ($0.58 per share this quarter) covering its recently increased monthly dividend of $0.175 per share, investors shouldn't fret about the company's ability to pay its dividend for the foreseeable future.

Still, it's important for investors to watch its nonaccruals and watchlist credits carefully. As nonaccruals and writedowns pop up across the industry, the days of every loan performing at or above expectations are probably behind us.