Google (NASDAQ:GOOG) (NASDAQ:GOOGL) Android remains the most popular mobile OS worldwide, claiming 81.5% of the smartphone market in 2014, according to IDC. Apple's (NASDAQ:AAPL) iOS came in a distant second with a 14.8% share.

But when it comes to profitability, Apple claimed a whopping 89% of all smartphone profits worldwide in the fourth quarter, up from 70.5% a year ago, according to Strategy Analytics. Android's percentage of profits plunged from 29.5% to 11%.

The message is clear: Android devices are now sold at such low margins that market share domination means little to hardware manufacturers' bottom lines. So what does this shift mean for Apple, Google, and Android phone makers?

Great news for Apple
Apple is arguably the only smartphone maker in the world that gets away with selling mid-range hardware at top-tier prices. The iPhone 6 had a weaker processor, smaller battery, less RAM, a lower-resolution screen, and weaker cameras than Samsung's (NASDAQOTH: SSNLF) Galaxy S5.

The IHS teardown implies that Apple earns a gross margin of 69% per entry level iPhone sold, but actual gross margins are lower due to major expenses like development, marketing, and shipping costs. Credit Suisse estimates that after those costs are factored in, the 16GB iPhone 6 costs $350.60 to produce while Apple receives $599 on its retail price of $649, giving it a gross profit margin of 41.5%.

Bad news for the Android Army
Apple's stunning profitability is bad news for Android handset makers, which have been struggling to stand out in an increasingly crowded market.

Over the past year, Samsung, the largest Android manufacturer in the world, has ceded market share to Chinese rivals such as Xiaomi, Lenovo, and Huawei, which are willing to sell smartphones at much lower margins. Between the fourth quarters of 2013 and 2014, Samsung's global market share fell from 30% to 20%. That means Samsung is losing control of a market that's also declining in overall profitability. Samsung hopes that its homegrown OS Tizen will provide a way out, but it's only been installed on one smartphone model so far. Last quarter, profit at Samsung's mobile division plunged 64% year over year. 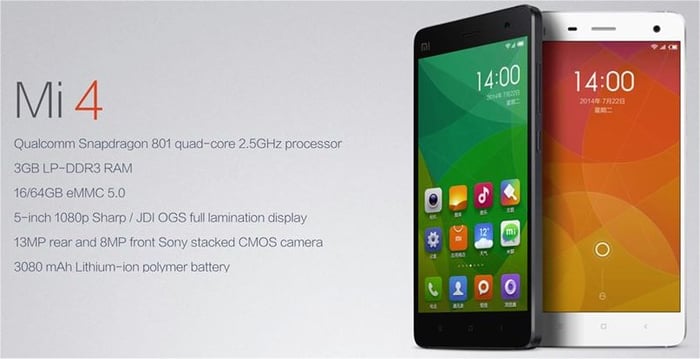 Meanwhile, smaller Android rivals such as Sony and HTC are faring even worse. Instead of slashing prices, Sony decided to sell fewer phones at higher prices to preserve margins, but that's a risky strategy that could just cause a slow death for its ailing mobile division. HTC is trying to diversify its product line with tablets and action cameras, but those products probably won't save it from being crushed between Chinese brands, Samsung, and Apple.

Both Samsung and HTC consider Windows Phone to be a possible way out, but profitability is reportedly even worse at Microsoft's (NASDAQ:MSFT) underdog OS. Strategy Analytics' report claims that Windows Phone, BlackBerry, and other platforms made no profit at all in 2014.

Indirect consequences for Google
If Google hadn't sold Motorola Mobility to Lenovo, it would still be racing other Android device makers to the bottom of the market. Android's lack of profitability doesn't seem like a big deal for Google, which monetizes Android through search advertising and app sales, but there are indirect consequences to consider.

First, the Android manufacturers that are crushing Samsung, Sony, and HTC sell most of their handsets in mainland China, where both Google Search and Google Play are banned. These companies use local search engines such as Baidu and their own app stores instead. As these companies spread across Asia, they might promote the use of their own app stores over Google Play, causing Google to lose ground.

As Android hardware becomes less profitable, companies like Samsung, Sony, and HTC will look for new ways to monetize the OS and cut Google out of the loop. Samsung, for example, already launched its own app store to counter Google Play. Samsung also bought mobile payments company LoopPay in February, in a clear bid to compete against Google Wallet and Apple Pay. Therefore, Google's hardware allies could start pulling away from Google's ecosystem to better monetize their own devices.

The verdict
Apple currently has a magic mix of high margins and high sales that its rivals can't touch. Google originally thought that handing out free software to tether handsets to its ecosystem would marginalize Apple, but the Android market is now saturated with low-margin devices. If Android handset makers can't make a profit, they'll look for new ways to make money -- and some of those strategies could leave Google out in the cold.