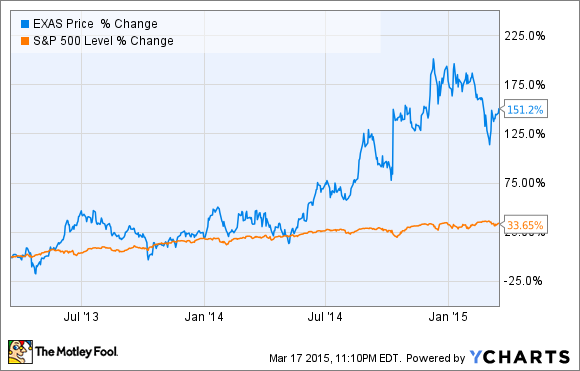 As you can see above, molecular diagnostics company Exact Sciences (NASDAQ:EXAS) has been cleared for takeoff by Wall Street and investors, returning better than 150% over the trailing-two-year period, while the broad-based S&P 500 gained just 34%.

But, while these gains are impressive, they could be just the beginning. Investors who've been on the outside looking in, and who feel they may have missed Exact Sciences' blazing run higher, may still have a good opportunity to profit over the long run.

Let's take a look at five reasons it's not too late to buy Exact Sciences.

No. 1: A noninvasive and convenient leap forward

To start with, Exact Sciences' primary catalyst, its Cologuard DNA colon cancer screening system, is a major leap forward from the prior standard of care diagnostic test for colon cancer.

The Cologuard system works by analyzing a stool sample from a patient -- a sample provided from the convenience of a patient's home and mailed to Exact Sciences' laboratory -- and looking for any DNA abnormalities. When waste works its way through our digestive system, our intestinal wall sheds cells encoded with our DNA. Cancerous cells, or precancerous adenomas, also shed cells, but they have mutated DNA. Thus, Cologuard works by attempting to detect these abnormal cells on a stool sample. A positive result of abnormal DNA would mean a patient's next stop is a colonoscopy. Note, Cologuard isn't designed to replace a colonoscopy, but merely act as a noninvasive first step to colon cancer detection.

Cologuard is a benefit to the consumer because it's not only convenient (as noted, you can mail in your sample to Exact Sciences, and they'll handle the rest), but it was a major leap forward in effectiveness. In clinical studies that led to its approval, Cologuard correctly identified colorectal cancers in 92% of all instances, and advanced adenomas (i.e., precancerous polyps) 42% of the time. I know that latter figure might sound a bit low, but the previous noninvasive standard of care only correctly identified 74% of all colorectal cancers, and just 24% of advanced adenomas.

In short, Cologuard is a major leap forward.

No. 2: There's veritably no competition
Cologuard is literally in a league of its own.

Exact Sciences' closest competitor is Germany's Epigenomics, which was dealt a blow last year when the Food and Drug Administration denied issuing a marketing approval for its Epi proColon test, which has been approved in Europe since 2012. As noted in Epigenomics' press release, the FDA wanted additional data from the company on whether its blood-based colon cancer test would encourage people to get a colonoscopy or be tested for blood in their stool. Chances are likely Epigenomics will need to run an additional study to get its product approved in the U.S.

By comparison, Exact Sciences pretty much has the entire noninvasive colon cancerdiagnostic market to itself. This should mean, at least within reason, strong pricing power for Exact Sciences and a steady increase in samples processed as time progresses. I don't think it's smart to count Epigenomics out, but investors should realize that it's going to be tough to unseat Exact Sciences, which will have firmly established itself if Epi proColon makes it to market in the United States.

No. 3: This is a huge market opportunity
Third, Cologuard sits at the forefront of a truly enormous market opportunity. Colorectal cancer is easily the most preventable form of cancer -- it just requires the patient to actually take action and get screened.

Over the past three decades, colorectal cancer deaths have fallen by about a third for men, and they've been steadily declining for women for about 80 years, which is a solid start. However, there's still a long way to go. According to the American Cancer Society's latest data, more than 136,000 colorectal cancer cases are expected to be diagnosed per year, resulting in just over 50,000 deaths per year. It's the second leading cause of cancer death, trailing only lung and bronchus cancer. This is where Cologuard could come into play. It's convenient, relatively quick, and it could mark an easy first step in the screening process for millions of Americans. Furthermore, it's potentially beneficial for insurers to have you get this screening regularly done, as the cost of a Cologuard test will be far less than the long-term costs of cancer treatment.

No. 4: Insurers are willing to work with Exact Sciences
That brings us to the next major point: Insurers and the Centers for Medicare and Medicaid Services are starting to getting behind Cologuard as a smart screening option.

In October, the CMS suggested that Exact Sciences be reimbursed $502 for every Medicare-qualified patient who uses the Cologuard colon cancer screening test. This price was generally at the high end of the expected range, and an important win for Exact Sciences as it cleared the way for millions of Medicare-qualified patients to be tested on a somewhat regular basis. But, this could be just the start.

Earlier this month, Exact Sciences announced a partnership with insurer Aetna that will allow its 967,000 Medicare Advantage members across the country to qualify for a Cologuard colon cancer screening test. As the press release notes, the diagnostic test will be available to these patients without a co-payment or co-insurance. "Free" is a strong tool that'll likely drum up significant business for Exact Sciences.

Ultimately, insurers understand that it's smarter to spend a little up front on this diagnostic test than to treat patients if they were to wind up with advanced colorectal cancer, which is when things get very costly and complicated. This is a wonderful case of economic interests being aligned with human interests, as widespread use of these diagnostic tests would hopefully lower the number of people who must suffer the disease.

No. 5: The valuation makes sense
Finally, even though Exact Sciences shares have more than doubled over the past two years, its valuation still makes a lot of sense if you take into account the previous four points.

Exact Sciences' fourth-quarter results didn't exactly encourage Wall Street -- revenue totaled just $1.5 million, and total tests processed climbed over 4,000 -- but much of this has to do with Exact Sciences "getting its feet wet," so to speak. This is Exact Sciences' first marketed product, and it takes time to spread the word to physicians and consumers alike. The company did recently announce a co-promotion agreement to market Cologuard with Ironwood Pharmaceuticals, which should help expedite Cologuard's marketing effort.

Factoring in Exact Sciences' veritable monopoly for noninvasive colon cancer screening, as well as its recent and expected insurance coverage wins, the $632 million in sales and $1.94 in EPS expected by 2018, according to Wall Street's current consensus, could make it a bargain. Right now the company would appear downright expensive at 12 times next year's estimated revenue with a loss of nearly $1 per share expected.  But, taking into account my expectation that Exact Sciences' top-line growth will exceed 10% per year, at least through the remainder of this decade -- peak annual sale estimates for Cologuard range from $1 billion to $2 billion -- I believe you can safely consider it a bargain at its current level.