Caterpillar (NYSE:CAT) has come under a lot of selling pressure lately, with the stock losing nearly 14% year to date and 19% over the past six months, as of this writing. 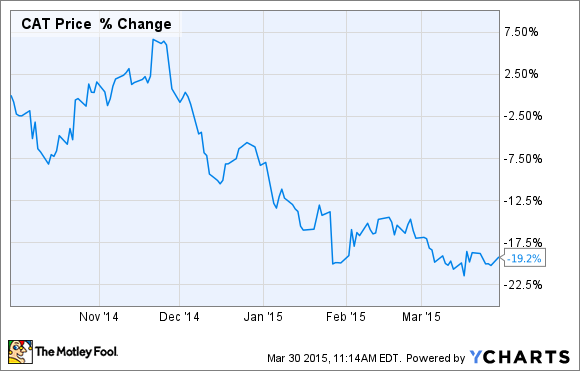 While Caterpillar stock many appear a bargain at current levels, investors may have to put up with more pain ahead. Here are three big reasons why the stock could head lower.

Mining is still in mess
Caterpillar's resource industries division was a major profit-churner for the company until a couple of years ago when a slowdown hit the mining industry. While investors have waited a long time for mining to bottom out, the wait is far from over yet.

During Caterpillar's recent earnings conference call management not only confirmed how mining order rate is still low, but also highlighted how the company is currently selling out of its backlog, and that it's reaching a level where it may not "have the capability to continue to do that." In other words, Caterpillar's mining backlog is depleting fast, and it isn't getting too many fresh equipment orders.

That's a dangerous situation to be in, and Caterpillar's resource industries revenue could soon dry up if orders don't pick up. Unfortunately, that's unlikely to happen anytime soon, given the depressed prices of key commodities. Even as I write this, iron ore and coal prices are hitting multi-year lows while mining majors like Rio Tinto are revealing fresh plans to slash capital spending and costs. That's terrible news for Caterpillar, considering that its growth depends a great deal on the health of the mining industry.

Other businesses aren't on strong footing either
With mining still in mess, the onus to steer Caterpillar through the challenging times rests on its other businesses of energy and transportation, or E&T, and construction industries.

Energy and transportation emerged as Caterpillar's largest and most profitable business after mining slowed down. For perspective, E&T made up nearly 60% and 54% of the company's total operating profit from all three divisions in financial years 2014 and 2013, respectively. But sales from the division have come under pressure after oil prices crashed. While E&T serves diverse industries, oil and gas is a primary end market.

During Caterpillar's fourth-quarter earnings release, CEO Doug Oberhelman called the recent plunge in oil prices a "significant headwind" for E&T, and cited "the recent dramatic decline in the price of oil" as the major reason behind the company's muted outlook for 2015. Caterpillar expects to generate revenue and earnings per share worth only about $50 billion and $4.60, respectively, in 2015 versus $55.2 billion in revenue and $5.88 profit per share reported for 2014.

With analysts predicting $30 a barrel for oil prices before they rebound, Caterpillar could be in deep trouble. In fact, like mining, order rate for E&T is on the decline and the company is currently selling out of its backlog. That's unsettling.

If you're now wondering and worried about how things are with Caterpillar's construction-equipment business, the chart below may give you an answer. It shows Caterpillar's three-month rolling retail sales statistics for construction industries over the past 10 months. 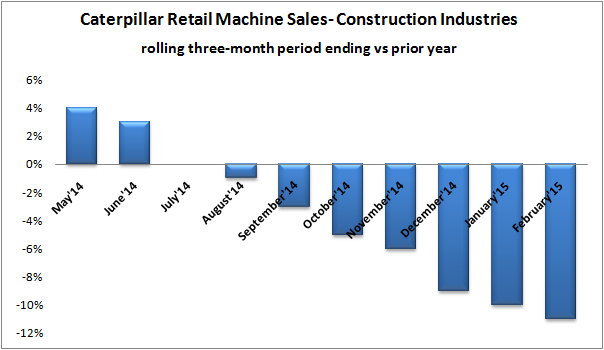 That's not the kind of picture you'd want to see. Caterpillar's construction-equipment sales are clearly trending downward. Aside from weak international markets, such as Europe and Latin America, the North American market is also showing signs of stress. For example, Caterpillar's construction machine sales from North America for the three months ended this past February fell 1% year over year compared to 8% growth registered for three-months ended November 2014.

Worse yet, a slowdown in the oil and gas industry can have ripple effects on the construction-equipment industry, especially demand for those machines that support energy-related infrastructure activities. So cheaper oil not only hurts Caterpillar's E&T business, but also indirectly hurts its construction industries division. Long story short, that downward trend in construction sales that you see in the above chart will likely continue.

So what should you do now?
With little control over macro factors like commodity or oil prices, there's not much Caterpillar can do right now aside from reducing costs and expenditures. And with each of its businesses battling several headwinds, it could take a year, or even more, before Caterpillar's prospects improve. Until then, the stock could struggle to hold up.