Shares of SanDisk (NASDAQ: SNDK) are now down 34% year to date. The company issued relatively weak guidance for the year during its earnings report in January (significantly missing first-quarter and full-year 2015 estimates), which drove the first leg down.

Then, last week, SanDisk pre-announced that Q1 results would be even worse than the weak initial guidance it provided as a result of "certain product qualification delays, lower than expected sales of enterprise products, and lower pricing in some areas of the business."

More troublingly, this does not appear to be a one-quarter issue, with SanDisk saying in its press release that it expects those complicating factors to impact its financial results for the rest of the year. Not surprisingly, the company said 2015 revenue will be "lower than previous guidance," and it withdrew its prior forecasts for both the quarter and the full year.

What are analysts now expecting?

At the most recent close of $64.98 per share, SanDisk trades at 14.5 times the current-year earnings estimate and 11.9 times the 2016 estimate. This is hardly an expensive stock, but I believe the two consecutive revenue and profit misses against analyst expectations do not sit too well with investors, leading to a sub-market earnings multiple.

Are SanDisk's future prospects still intact?
It's worth stepping back to understand exactly what is going on with SanDisk; to do that, we need to rewind to the last quarterly report. At the time, SanDisk issued a fairly disappointing guidance. Management said the loss of a major OEM customer would lead to a weak first half of 2015.

Management, however, was optimistic at the time that business would pick up in the second half of 2015, with CFO Judy Bruner saying the company would be in the "upper half" of its target financial model during that period (you can see this model in the slide below): 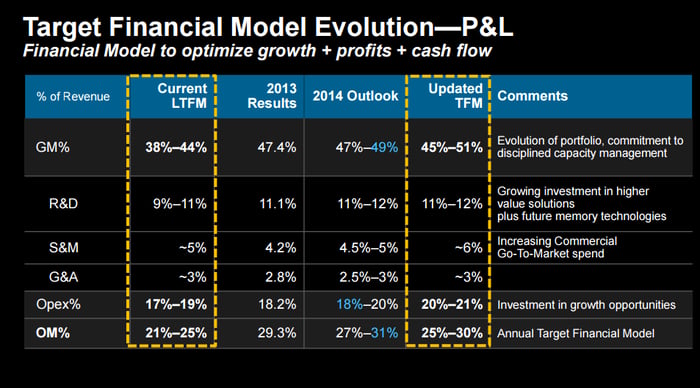 However, SanDisk's latest earnings pre-announcement specifically pointed to lower than expected sales of enterprise products as impacting the company for the year.

Given that SanDisk had guided to $1 billion in enterprise solutions-related revenue this year, and had pointed to enterprise sales helping product mix (enterprise products carry higher gross profit margins than client products) and offsetting the aforementioned client SSD weakness, it's no wonder investors were unhappy.

Is the glass half-full, or half-empty?
I agree with the popular view that SanDisk's issues are related to its own execution rather than to the fundamental demand for its products. For example, the "product qualification delays" and the "supply issues" SanDisk cited in its pre-announcement are issues particular to SanDisk's execution.

Execution issues in a healthy market can be a bit of a double-edged sword.

On one hand, if SanDisk can work through its issues, then it might be able to capitalize on the attractive opportunities in the markets in which it competes. However, there's uncertainty as to when or even if SanDisk will improve its execution against fierce competitors.

I'm waiting for the earnings report
I'm going to wait for SanDisk's full earnings report and accompanying conference call before deciding whether to bet on a turnaround.

I'd like to hear management's "vision" for putting execution back on track. If the plan sounds attractive, and if the stock stays low, then I might consider opening a position.

If the plan appears unworkable, then I'm obviously going to steer clear of the stock.

After Plunging, is SanDisk Corp. Stock Worth Buying? @themotleyfool #stocks Next Article
Current