After electric-car maker Tesla Motors (NASDAQ:TSLA) reported better-than-expected quarterly deliveries on Friday, the market appears to have greater confidence in the company's growth story. The stock jumped as much as 8% this morning as investors consider the implications of Tesla's record 10,030 deliveries of its Model S sedan in Q1.

An effort to minimize market noise
Reporting its quarterly results early, Tesla is aiming to minimize rampant speculation about its vehicle deliveries. Until now, Tesla typically reported its quarterly deliveries along with its quarterly earnings report. While Tesla hasn't scheduled the date for its first-quarter earnings release, which covered the three-month period ending March 31, the company doesn't typically release results for the quarter until the first half of May.

"Going forward, Tesla will publish the number of new car deliveries within three days of quarter end. We have decided to take this approach, because inaccurate sources of information are sometimes used by others to project the number of vehicle deliveries," Tesla said in the press release announcing the record deliveries.

While Tesla's move to report quarterly sales on an earlier time frame may be an improvement from its previous practice, it's still far different from what the auto industry is used to. Other auto manufacturers report sales on a monthly basis. Tesla CEO Elon Musk contends that, given Tesla's small scale and rapid growth compared to other auto manufacturers, sales on a month-to-month basis are volatile and would be more confusing than predictive. Tesla's monthly sales vary from factors as simple as a larger than usual shipment of Model S to China or Europe as the company beefs up its supply, factory downtime from tooling, or a high proportion of vacationing customers during the holiday season who are unable to take their orders.

Another key change to the way Tesla reports auto sales this year is a clarification about what it actually counts as a vehicle delivery.

The company explained the change in its fourth-quarter letter to shareholders.

Starting in 2015, we plan to reorganize the revenue and cost of revenue subsections of our income statement so that automotive revenue and gross margin reflect only new car sales activities, including regulatory credits. Revenues and gross margin for all of our other businesses such as powertrain sales, services, trade-in sales and stationary storage will be captured in the "Services and Other" section of the income statement. This should provide clearer disclosure of our core business of new car production and deliveries.

Tesla also said in its quarterly press release that its vehicle delivery count of 10,030 vehicles in Q1 only represents the Model S sales that qualify as a new-car sale.

Tesla clarified with The Motley Fool that, beyond its exclusion of trade-in vehicles in new-car sales, Tesla is also excluding any sales of discounted Model S. The company had discounted the remaining 2014 models, which don't include new autopilot sensors featured standard in 2015 models, probably most of which were being used as service loaner vehicles and in its sales department for test-drives and displays in its stores.

It wasn't until the second half of Tesla's fourth quarter and in the first quarter of 2015 that these distinctions even mattered enough for Tesla to clarify what counted as a new-car sale. The availability of dual-motor all-wheel-drive Model S and new standard hardware, which will soon enable (via an over-the-air-software update) hands- and feet-free driving from highway on-ramp to highway off-ramp, has compelled some Model S owners to trade in their vehicles, making the distinction of what Tesla counts as deliveries important.

The earlier reporting and clearer clarification of what Tesla is counting as a vehicle delivery will help investors get a more accurate picture of Tesla's business.

Is 10,030 deliveries actually surprising?
Investors should keep in mind that Tesla's guidance has typically proved to be fairly conservative. Tesla has only missed its quarterly guidance in one quarter out of the last nine. Furthermore, investors should remember that since Tesla reports results usually more than a month into the next quarter, management has considerable vision into its potential deliveries. 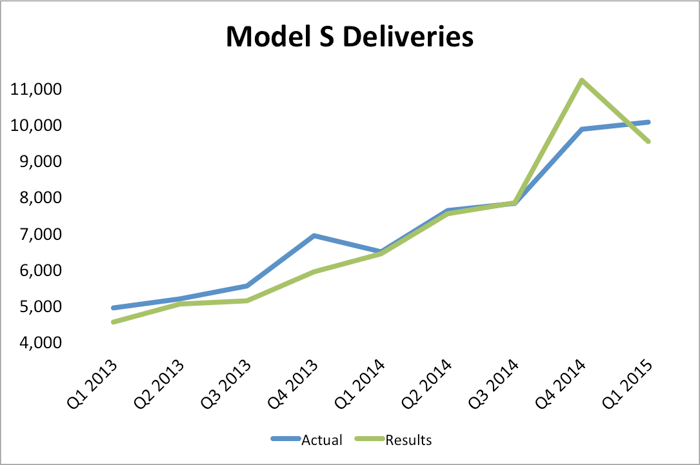 While Tesla's quarterly deliveries may be a driver in short-term stock price movements, what will ultimately make or break this growth stock is its execution on its longer-term growth plans. This summer, Tesla plans to launch its Model X SUV, which the company is hoping will eventually elicit demand that rivals demand for its Model S. By 2017, Tesla plans to launch its lower-cost Model 3, which Tesla hopes will help the company reach 500,000 annualized deliveries by 2020. Sure, how Tesla's actual quarterly deliveries compare to its guidance may play a role in investor confidence regarding Tesla's longer-term plans, but investors should remember to keep the bigger picture in mind, which is largely already priced into the stock.