Dollar General is hoping its growth plans smoke the competition in in years ahead.

After a pretty successful 2014, Dollar General (NYSE:DG) is looking like it's set to have a similarly profitable year this year. Look at all the deep discounter accomplished in the fourth quarter and the year:

Those are not inconsequential achievements, and they were behind the 17% jump in the company's stock price in 2014. Shares being up another 7% this year doesn't mean Dollar General will find it a smooth path in growing further. In fact, many of the growth initiatives it has planned could derail that trajectory, and investors would be wise to keep in mind those things that could cause it to stumble.

Here are three of the biggest reasons Dollar General's stock could fall in 2015.

1. More and greater competition
Not only did it lose the bidding war for Family Dollar (NYSE:FDO.DL) to Dollar Tree (NASDAQ:DLTR), an acquisition that will see its rival become the largest deep-discount chain, but it faces the prospects of top-down competition from the likes of Wal-Mart (NYSE:WMT) and Target (NYSE:TGT), which are expanding their presence with small-format stores.

With the all-but-completed merger of Family Dollar and Dollar Tree, the combined company will have about 13,000 stores in 48 states and five Canadian provinces generating sales of more than $18 billion. In contrast, The General has around 11,800 stores.

Not your typical dollar store far, Dollar General Markets push it into a new level of competition. Source: RustyClark via Flickr.

Dollar General wanted Family Dollar to better compete against Wal-Mart, which is accelerating the opening of its small Neighborhood Markets stores. The General is expanding its own produce and grocery offerings through Dollar General Markets concept stores, meaning it will become a tougher head-to-head matchup, one that could pressure margins.

2. Expanding too rapidly
As a result of losing the takeover battle, Dollar General is also stepping on the accelerator to open more stores. On top of the 700 it opened in 2014, it plans on opening another 730 this year, and an additional 900 next year, keeping its square footage growing at a 6% to 7% annual pace. But doing too much too soon could make incorporating all of those new stores an unwieldy process, something companies all across the retail industry have learned when they tried to do too much in a short amount of time.

And in another nod to doing everything big, Dollar General also announced a huge stock buyback, some $1.3 billion worth, and it initiated a dividend of $0.22 per share. Sure, those actions will help return some value to shareholders, but this rush to be all things to its investors has a high probability of misfiring. Investors need to keep an eye on how store growth impacts its profitability; a drop there could take a toll on its ability to repurchase shares and maintain consistent dividend growth. 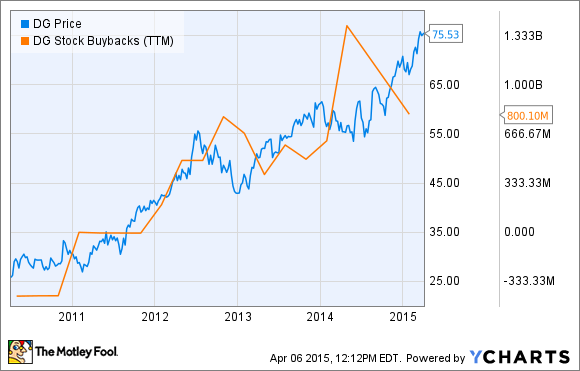 3. Room at the top
With CEO Rick Dreiling stepping down and CFO David Tehle retiring, Dollar General has a brain drain in the C-suite that will have its replacements needing to take the reins just as the deep discounter is attempting to transition to a new, more competitive marketplace. The loss of these two executives, who have maneuvered Dollar General through its successful return to the public markets, comes at an awkward time.

The deep-discount retailer isn't floundering by any means, but asking new leadership to take over just as its rivals are going on the offensive -- and as Dollar General needs to outperform to finance new goals -- is a tall order.

A steady focus on growth
Again, Dollar General isn't a company in distress, and the concerns highlighted above can work themselves out to its benefit. In fact, they could end up powering the deep discounter to even greater heights if they fall into place. But the market always seem to have a way of disrupting the best-laid plans, and investors would do well to remain aware that there will most likely be stumbles in the future -- missteps that could send the company's stock lower.