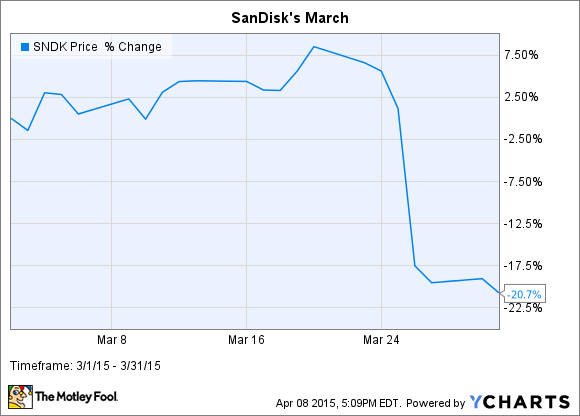 What: Shares of flash member storage manufacturer SanDisk (NASDAQ: SNDK) sank 21% in March, according to S&P Capital IQ data, as investors reacted negatively to the company's slashing its revenue forecast for its first fiscal quarter and withdrawing its full-year guidance. Later in the month, shares remained under pressure when law firms announced possible lawsuits for potential securities violations.

Now what: For investors, this is both familiar and unfamiliar. The company also warned on forecast during the fourth quarter, but for different reasons. During the fourth-quarter warning, the company blamed the forecast on specific product: iNAND memory. This quarter, the company blamed a variety of factors including delays and supply issues, lower enterprise sales, and general overall lower pricing for the lower forecast.

In addition, the company withdrew full-year guidance. What followed was a host of analyst downgrades from Goldman Sachs, Bank of America, Evercore, and BTIG. Finally, toward the end of the month, multiple law firms announced investigations focusing on whether SanDisk violated federal securities laws. Many of those investigations have since become filed lawsuits.

So what: SanDisk appears to be a bifurcated stock, with one group confounded by continued forecast slashes and perplexed by the potential lawsuit while an entirely other group notes the company still has a necessary and in-demand product. Fellow Fool Ashraf Eassa firmly blames SanDisk's delay and supply issues on its own execution rather than an unhealthy market.

And while Ashraf correctly notes that the second half was always supposed to be better for SanDisk, according to management, I'm not sure the company can properly deliver. In the end, the company is in a highly commoditized business. Even with healthy demand, it's not entirely possible SanDisk will benefit. Recently, a rumor came out that Apple is considering using Samsung exclusively for NAND flash memory in the iPhone 6s after a host of providers, including SanDisk, had performance issues. In light of the legal troubles and execution issues, I'm willing to watch this stock from the sidelines.