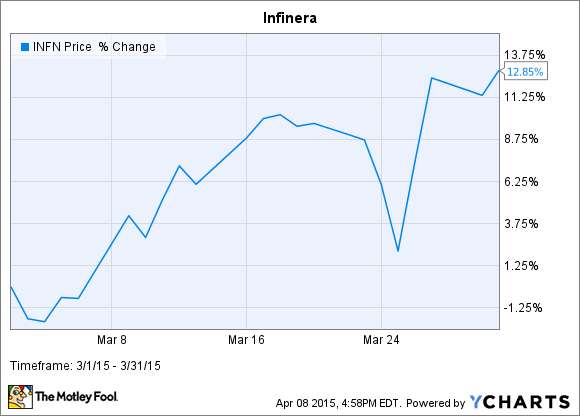 What: Shares of digital optical networks manufacturer Infinera (NASDAQ:INFN) jumped 13% in March, according to S&P Capital IQ data, as investors and analysts reacted positively to its new technologies and a late-month report that social-media giant Facebook was working with the company in Europe.

So what: Shares of Infinera rallied nearly 6% on the news that the company was introducing two new photonic integrated circuits for delivery later this year. As a leader in the high-speed optical networking space, the company's constantly looking for ways to move data more efficiently and with less power. According to the company, these PICs result in an average reduction in power needed of 31% and reduces inefficiencies by 45% compared with conventional technologies. Research firm MKM Partners' Michael Genovese estimates Infinera's total addressable market to increase to $20 billion in 2018, up from $5 billion last year.

A few days later, investors were treated to more positive news when Facebook announced that it was utilizing Infinera's DTN-X platform for its long-haul terrestrial data transport. Per Niclas Comsted, director of Network Engineering at Facebook, "The Infinera Intelligent Transport Network makes it easy for us to rapidly grow network capacity while keeping operations simple."

Now what: A play on Infinera is a continued play on the growth of data transmission. For perspective, the 8-terabit deal with Facebook has the capacity to stream 1 million high-definition videos simultaneously. And many believe we're only in the initial stages of data production and transmission, with many developing countries recently coming online in a major way, and the continued push in developed countries with Big Data and the Internet of Things.

In the meantime, the company recently shipped its Cloud Express product in December, with the product providing little revenue in Infinera's fourth quarter. The company expects higher adoption in first quarter and reports its results April 21. If March is of any indication, investors have high hopes for the company.