It's no secret that the competition in the automotive industry is intense, and it's an industry where a few design flops can mean the difference between a minor brand's climb up the sales rankings and a long stint of crippled growth. While Japanese automakers such as Toyota Motors (NYSE:TM), Honda Motor, and Nissan have done well in the U.S., Mitsubishi Motors (OTC:MMTOF) has lagged behind recently. Also, Scion, a brand under Toyota's umbrella, has failed to catch on with its intended younger target audience. Both Mitsubishi and Scion are attempting a rebound, but if these new vehicles flop, the automotive brands will be closer to complete failure in the U.S. than to reviving their market share.

Mitsubishi Outlander
The Outlander kicked off its journey on a bumpy road, as critics said that the crossover was cheap and unremarkable. In fact, its first full year of sales totaled a meager 13,000 units in 2014 -- a level of sales that Ford's Escape accomplishes in roughly two weeks.

In an attempt to revive the dismal sales of the Outlander, the automaker is going beyond the typical midcycle refresh that usually consists of minor aesthetic updates. Mitsubishi has made significant design and engineering improvements to the 2016 model -- more than 100, it claims -- and the vehicle now looks more expensive than it is.

The vehicle boasts what Mitsubishi calls "Dynamic Shield," its new front design concept. Its exterior is noticeably more aggressive, with redesigned front fenders, LED position lights, and halogen headlights, as well as 18-inch alloy wheels. On the inside, the 2016 Outlander has a redesigned steering wheel, a new navigation and display system, and improved seating surfaces. As far as driving goes, Mitsubishi is aiming to improve the handling and reduce cabin noise. It also redesigned and improved the suspension and electric power steering to better the vehicle's driving performance.

That's a good start, and the redesigned 2016 Outlander comes at a great time for Mitsubishi, as sales of SUVs and crossovers are accelerating in the U.S. as the segment's fuel economy has improved and gas prices have declined.

"This should give us two good-volume vehicles in our lineup," said R.C. Hill, a Florida dealer and former chairman of Mitsubishi's national dealer council, naming the Outlander Sport as the other, according to Automotive News. "We desperately need that. We don't want to go backward." 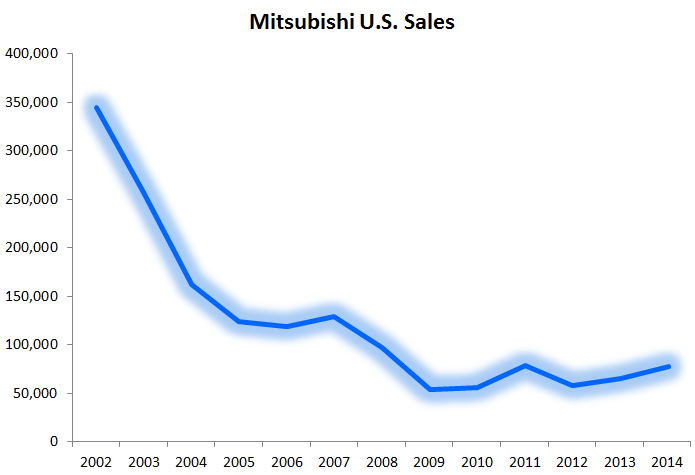 On paper, the 2016 Outlander is a huge improvement, but if it fails to gain traction amid the intense competition from Detroit automakers, investors shouldn't expect a rebound in Mitsubishi sales over the next five years anywhere near the levels seen in early 2000s.

Scion iM and iA
Toyota, which is often known for high-quality but boring vehicles, wanted to shake things up when it created its Scion brand. The idea was to appeal to a younger, more performance- and sport-oriented consumer. It appeared to have the right idea at first, as you can see the spike in sales below, but then the brand lost its magic as two of the brand's best-sellers, the tC and xB -- which generated roughly 85% of total Scion sales in 2006 in the U.S. -- posted respective sales declines of 77% and 73%, respectively, from 2006 to 2014. 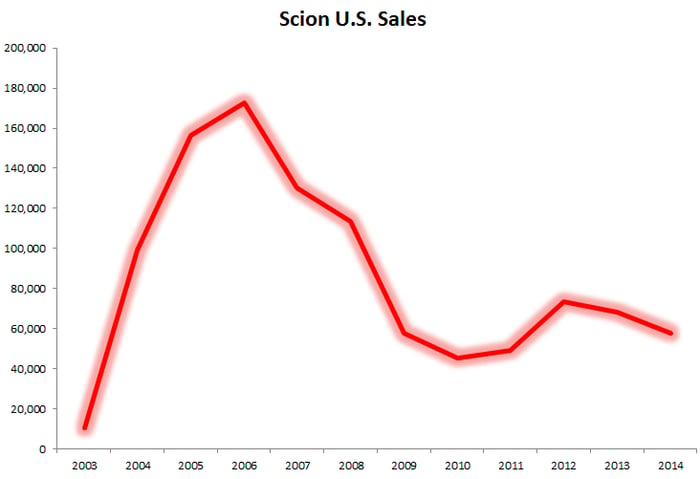 Scion's first sedan checks in with an estimated MSRP in the $16,000 range for what the company calls a well-equipped mono-spec model. The all-new 2016 iA will have a 1.5-liter engine under the hood, generating a meager 106 horsepower, and will get an estimated 42 miles per gallon on the highway.

The second Scion model to be unveiled last week in New York was the iM hatchback. It's a little pricier, with an estimated MSRP of just under $20,000, but Scion hopes it's still the answer for younger buyers looking for a sporty ride while still being able to pay off student loans. A look under the hood reveals a 1.8-liter engine generating 137 horsepower while achieving an estimated 37 miles per gallon highway.

"Both the iM and the iA are tremendous additions to our lineup and will appeal to young people with different perspectives and needs," Doug Murtha, Scion group vice president, said in a press release. "These cars represent the evolution of Scion and are kicking off a new wave of momentum for the brand."

Scion is important for Toyota because it's the automaker's attempt to show the market it can design flashy vehicles, something not often found with its Camry or Corolla models. It's also important to lure in younger consumers, because more often than not, those consumers stick around and could eventually step up to Toyota's luxury brand, Lexus, which generates better margins and price points for the automaker.

Both of the new Scion models are expected to hit the showroom later this year, but if the performance of the iA, with only 106 horsepower, underwhelms the consumer and the iM fails to catch on with younger buyers, Scion's potential brand revival might not happen until years down the road -- an unusual failure for Toyota.