When Amazon.com (NASDAQ:AMZN) launched Echo in November, the wireless speaker/voice assistant was sort of a pleasant oddity.

The device is a pretty good music player that ties into the retailer's Prime Music service, which offers a decent selection of free music to the company's $99-a-year Prime members. It also gives users access to any songs in their Amazon libraries, as well as the TuneIn and iHeartRadio apps. Echo also launched with a number of semi-useful functions, including delivering weather reports on command, and a few silly tricks like delivering jokes.

It wasn't a particularly useful product, but at the launch price of $99 for Prime members, it was worth it just for the voice-controlled music features.

Since launch, though, Amazon has slowly rolled out new features for Echo. Some -- like the ability to make it repeat anything you say by using the "Simon Says" command -- were clever, but not very valuable. Others, including the addition of news reports, support for Pandora's streaming music service, and real-time traffic reports, began to make the digital assistant more than a novelty.

Now, Amazon has added some basic home control features into Echo, and a vision for the device as a central hub controlling your home is emerging. It's not all there yet (which is likely why the retailer still sells Echo on a limited, by-invitation basis) but the latest functionality update shows where Amazon is going. 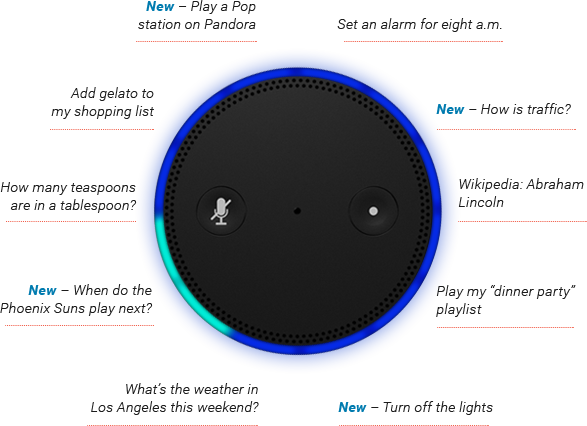 Echo can answer a number of questions, some useful, others less so. Source: Amazon.

What Echo can do now
Amazon has been letting Echo device owners know about the steady stream of updates via email and in the Echo app. The latest email, sent April 8, announced that Echo now works with WeMo and Philips' (NYSE:PHG) Hue home automation products.

You can now use Echo to switch on the lamp before getting out of bed, turn on the fan or heater while reading in your favorite chair, or dim the lights from the couch to watch a movie -- all without lifting a finger ... or even raising your voice.

The new functionality makes it possible to use Echo via voice command to control devices including lights, coffeemakers, and really anything that can be plugged into an outlet. It's a huge leap forward in usefulness for the voice assistant and one that makes it much more valuable in the home. Though WeMo and Hue devices were already controllable via apps, allowing them to be operated via voice command makes them more practical.

Imagine coming home to a dark house and instead of fumbling for a phone simply saying, "Alexa, turn on the kitchen light." It's not quite The Jetsons, but it is the start of the futuristic home that shows like that have been promising for decades.

This is just a start
Amazon clearly has big plans for Echo as more than just a wireless speaker that can deliver information. The company sees the device as a command hub for the home and a sort of central brain that can do all sorts of things.

These first home automation functions are likely just the beginning as Amazon rolls out more ways to control your house through Echo. The company is also opening up the platform to developers, which should result in increased functionality via third-party apps.

Echo is huge for Amazon because it replaces the smartphone, tablet, or computer as the home's central control device. That's great for the retailer, but it also could be very good for the future of home automation. Voice command, which Echo does very well, is a much more natural way to control a house than typing on a device.

Amazon might gain entry to people's homes simply because Echo does some cool things and serves as an excellent music device. That foot in the door could give the company the critical mass needed to turn the voice assistant into a viable control system for the growing opportunity presented by home automation.

Is Amazon's Echo On Its Way to Taking Over Your Home? @themotleyfool #stocks $AMZN $PHG Next Article
Current