What: When a stock loses a quarter of its value in the space of a month something is wrong. For Energy XXI Ltd. (NASDAQ: EXXI) the list of what went wrong in March is pretty long. In the space of just 31 days the stock was downgraded, it was added to a list of the companies with the worst credit ratings, it raised more debt at a double-digit interest rate, and oil prices dropped again. 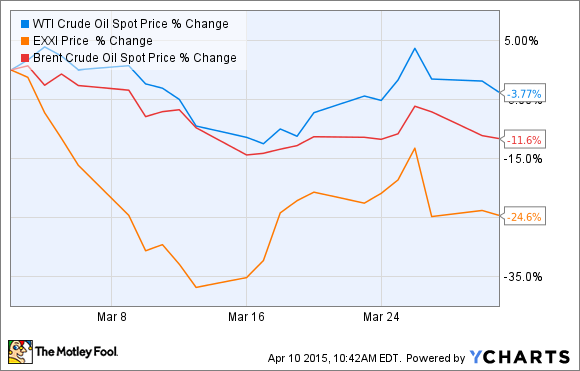 So what: Of all the news items mentioned above the one that stood out to me was the debt the company raised in March. Energy XXI went to the market and found takers for $1.45 billion in new debt, which was actually $200 million more than it had initially sought. The company is paying a high cost for that debt, though: the interest rate is 11%.

Energy XXI needed the money in order to pay down its revolving credit facility and to fund some of its 2015 capital expenditure plan. By the end of last year Energy XXI had borrowed $689 million of its $1.5 billion borrowing base, which was due to be redetermined in April, and there was a risk the facility's borrowing capacity would be dramatically cut. More concerning, however, is that even after paying that off this debt issuance will increase Energy XXI's total outstanding borrowings. That's a bad sign given that the company's long-term debt already stood at $3.7 billion at the end of 2014. Suffice it to say this debt has weighed significantly on the stock: Shares are down 83% from their 52-week higher after being pummeled by weak oil prices and worries over its debt-heavy balance sheet.

Now what: Energy XXI needs to do more than just raise additional debt if it wants to fix its balance sheet. The company has plans to sell noncore assets, but it will be selling into a buyers' market, suggesting it won't get top dollar for those assets. That puts the company in a tough position; if oil prices don't cooperate, that debt could be its undoing.

Pick Your Poison: The Many Reasons Why Energy XXI Ltd.’s Stock Crashed 24.6% in March @themotleyfool #stocks Next Article
Current