While a stock's price doesn't tell us whether it's a good value or whether it has strong growth potential, there's still something about low-priced stocks that appeals to investors. Having said that, good deals can be found at lower price points. Here are three promising stocks from the financial sector that all trade for less than $10.

A good play on strengthening banks

Let's start with Regions Financial (NYSE:RF), which currently trades for about $9.60.

Since the financial crisis, the bank has done a good job of building up its capital levels and improving credit quality. All credit metrics continued to improve in 2014, and at the end of the year, Regions' nonperforming loans made up just over 1% of the entire portfolio, down significantly from nearly 3.8% in 2011. 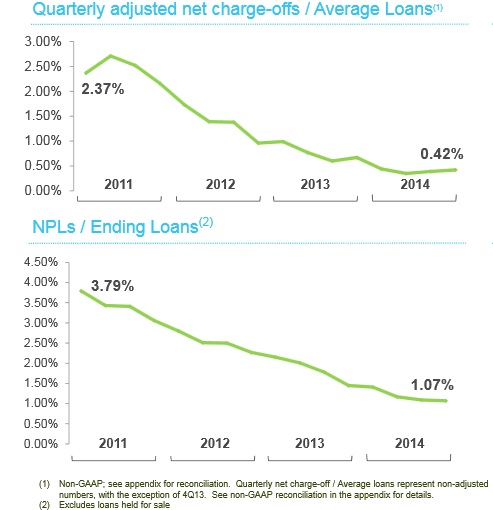 In 2014, Regions increased its deposits and loan portfolio and pushed down its deposit costs to historic lows. The bank plans to further grow its loans by 4%-6% in 2015, to build its investment services and wealth management businesses, and to continue to reduce legal expenses and improve operational efficiency.

Regions currently trades at a substantial 20% discount to book value, so although ongoing risks persist (such as exposure to energy-related loans), the bank's vast improvement could make it worth a look.

However, now might be a good time to pick up some BDCs at a discount, and my favorite name in the business is Apollo Investment Corp. (NASDAQ:AINV). Currently trading at a discount of nearly 7% based on its net asset value of $8.43 per share, Apollo pays an attractive 10.2% dividend yield as of this writing. 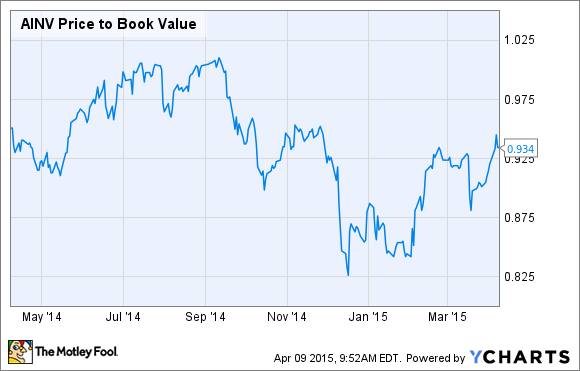 The company mainly invests in middle-market companies and has a diverse portfolio of 109 different companies. So, if any one of the companies were to default on its debt, Apollo should be just fine, but this hasn't been much of an issue so far. Just 0.3% of Apollo's portfolio (based on fair value) were classified as nonaccrual as of the end of 2014.

Finally, unlike many high-yield companies, BDCs such as Apollo should do just fine once interest rates begin to rise. Fifty-two percent of Apollo's investment portfolio is at a floating rate, meaning that when rates go up, so does the company's income. However, only 19% of Apollo's funding comes from floating-rate loans. In other words, when rates rise, the company's income should increase significantly faster than its liabilities.

Strong growth potential and a great dividend
Many investors don't realize it, but real estate is also included in the financial sector. And the best way to invest in real estate is through a real estate investment trust such as Chambers Street Properties (NYSE: CSG), which currently trades for $7.80 per share.

Chambers Street is a good choice for a few reasons. First, it invests in industrial and office properties, which by nature are much more stable investments than residential properties such as apartment buildings. For starters, commercial tenants tend to sign longer leases (10 years or more) with annual rent increases already agreed upon. That means even if the economy tanks, as it did in 2008, Chambers Street doesn't have to scramble to convince all of its tenants to stay. In fact, its income would continue to rise.

Industrial tenants are also generally responsible for expenses including taxes, insurance, and maintenance, which can fluctuate dramatically on an annual basis. In a nutshell, industrial properties are consistent sources of income year after year.

Chambers Street in particular has a strong portfolio of 128 properties with a total of almost 38 million rentable square feet, which it leases to strong tenants such as Amazon.com, Barclays, and Raytheon, just to name a few.

Finally, perhaps the best reason to like Chambers Street is its excellent combination of income and growth potential. The company pays an annual dividend yield of more than 6.4% on a monthly basis, and it should also benefit from rising property values over time.

Price is just a number
Although these stocks all trade for low prices and have great potential, you shouldn't ever make a decision on a stock based on the dollar value of one share. For example, National Bank of Greece (OTC:NBG.DL), in my opinion is one of the worst stocks you can buy right now, despite its cheap price tag. On the other hand, I think Priceline Group is rather cheap at $1,200 per share.

The point is that share price is just a number, and it tells you nothing about the valuation of a stock or its growth potential. Make sure you do your homework and look into more useful valuation metrics before making any investment decisions.