Healthcare conglomerate Johnson & Johnson (NYSE:JNJ) reported its first-quarter earnings results on Tuesday, which apparently baffled Wall Street and investors since its share price vacillated both higher and lower during the day, ultimately ending at a nearly unchanged loss of $0.03 per share.

The headline figures were as follows: Johnson & Johnson reported a 4.1% decrease in total sales to $17.4 billion compared to the previous year, while adjusted EPS clocked in at $1.56, a 4.3% decline from Q1 2014. Comparably, its sales figures were right in line with Wall Street's consensus, while its profit per share of $1.56 topped the consensus by $0.02. J&J also revised its full-year earnings guidance, lowering its range slightly to a new forecast of $6.04 to $6.19 in EPS to reflect ongoing currency fluctuations.

But, there's more to this story than meets the eye with these headline figures. Let's take a closer look at five initial takeaways from J&J's first-quarter report that should give you a better understanding of what's really going (and why Wall Street seesawed its stock price in Tuesday's trading session).

What's happening is businesses are translating foreign currency back into U.S. dollars and losing some percentage of their revenue and profits in the process. It's not a direct reflection of how well or poorly their business is performing, nor are currency movements anything a business can control, but it can make the headline figures look downright ugly.

In the case of Johnson & Johnson, its top-line figure of a 4.1% decline in sales is actually masking a 3.1% improvement in its operational sales results. During the quarter, J&J was dealt a negative currency impact of a whopping 7.2%. We could even take this one step further and exclude the one-time costs and benefits associated with acquisitions and divestitures to get to the real apples-to-apples comparisons, where worldwide sales increased 5.7% from Q1 2014, including a 9.1% sales increase domestically (primarily tied to its strong U.S. pharmaceutical sales).

Takeaway 2: Obamacare uncertainties aren't helping J&J.
Perhaps I should place an asterisk at the end of the previous point, because one area where growth has been a bit subpar for Johnson & Johnson is its medical device and diagnostic segment. Excluding currency movements and one-time acquisitions and divestitures, worldwide sales rose 1.3% in Q1 2015, including 1.1% domestically and 1.5% overseas.

I would eventually expect J&J's Synthes acquisition to result in strong emerging market growth in its medical devices segment, but the big concern right now is its modest apples-to-apples growth in medical devices in the United States.

Why the sluggish growth? My bet is that uncertainties surrounding the Affordable Care Act, better known as Obamacare, are taking their toll. Medical device makers such as J&J are counting on an influx of newly insured people to see their doctor for preventative care. Some of these patients will be referred for surgical procedures, which is where J&J and other device makers could benefit. Unfortunately, pending legal cases such as King vs. Burwell, could threaten the long-term survival of Obamacare -- and cases like this are actually causing medical care facilities and consumers to be more cautious with their healthcare spending in the interim.

Tuesday's results imply that J&J is probably years away from logging stronger growth prospects in this segment.

Takeaway 3: Invokana is pacing blockbuster status.
Within its pharmaceutical segment, Johnson & Johnson's revolutionary type 2 diabetes drug Invokana is officially pacing blockbuster status now. After producing $201 million in revenue in the sequential fourth quarter and $586 million in all of 2014, Invokana brought in $278 million in Q1 2015. That's a 38% sequential quarterly increase, a tripling in year-over-year sales, and a $1.1 billion annual pace assuming no additional sequential quarterly growth (which is highly unlikely, so this figure could wind up being much higher).

Invokana is part of a new class of type 2 diabetes drugs known as SGLT2 inhibitors, which work by blocking glucose absorption in the kidneys and allowing patients to flush excess glucose out of their body through their urine. As an added bonus, SGLT2 inhibitors were also shown to promote weight loss as a side effect (though, to be clear, they aren't labeled for weight loss).

Takeaway 4: Imbruvica's growth hasn't been as stellar.
On the other hand, while blood cancer drug Imbruvica grew its sales substantially from the prior year to $116 million in Q1 2015 from just $10 million in Q1 2014, sales growth within the United States was particularly disappointing.

Imbruvica has been labeled by Wall Street as a cancer drug capable of $5 billion to $9 billion in peak annual sales, depending on its ability to gain new indications beyond mantle cell lymphoma and chronic lymphocytic leukemia. In Q4 2014, Imbruvica delivered $64 million in sales in the U.S. and $28 million in sales overseas. In Q1 2015, U.S. sales grew by just 3% to $66 million, while international sales expanded nicely to $50 million. The U.S. was expected to be Imbruvica's bread and butter market early on, so to see its growth slow so dramatically in one quarter is a bit concerning.

Of course, we could be dealing with nothing more than a purchasing cycle issue, which isn't uncommon in Q1 for pharmaceutical companies. Either way, Imbruvica's growth is pacing slower than I initially expected, and it's worth keeping a close eye on as we head into the second quarter.

Takeaway 5: A dividend increase appears to be in the cards.
Lastly, while no mention was made of Johnson & Johnson's dividend in its quarterly report, its projected payout ratio of 45% in 2015 certainly implies that it could increase its dividend for a 53rd year in a row in the coming weeks. J&J often announces annual dividend increases at its annual shareholders meeting, which is scheduled for April 23. 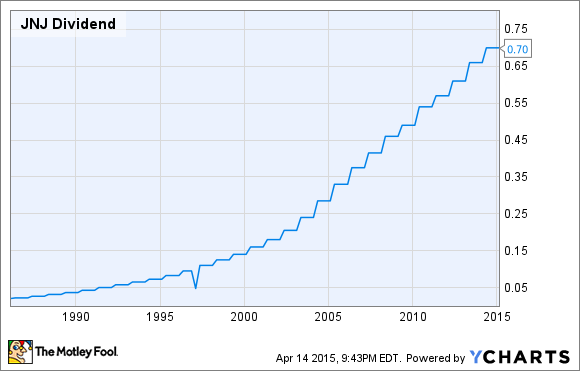 Johnson & Johnson has been growing its payout by a mid- to high-single-digit percentage in recent years, but the genuine prospect of slower growth toward the end of the decade could necessitate a tamer approach to dividend hikes in the future. With J&J already sporting a 2.8% yield with a payout of $2.80 per year, I wouldn't be surprised to see the company boost its payout to a clean $3 per year, or $0.75 per quarter.

In other words, expect J&J to remain an income investor's dream stock.

What this investor thinks
On one hand, I believe J&J is getting a bad rap because of its currency woes. If investors took the time to make apples-to-apples comparisons of J&J's three business segments, they would be pleasantly surprised overall. On the other hand, I worry about sluggish growth potential in the U.S. for J&J's medical device and diagnostics segment, and the recent slowdown in growth for Imbruvica.

All in all, this report hasn't swayed my opinion on Johnson & Johnson -- I still believe it to be a great long-term stock to consider buying -- but it's given me new points to monitor as we move forward.