Costco (NASDAQ:COST) recently posted a surprising drop in revenue for the month of March. It was the first negative sales number for the warehouse giant since 2009 and might have given investors a chance to buy the stock at a discount. Yet Wall Street shrugged off the bad news.

The stock sits just below its all-time high price of $155 per share, and so prospective shareholders still have to pay up to own a piece of this retailer. 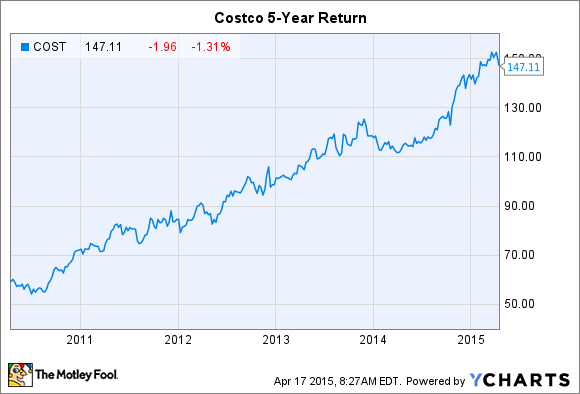 There were good reasons to ignore the March sales dip. First, revenue was flat in the U.S on account of lower gasoline prices. Excluding gas, comparable store sales actually grew by 4% in the month. Second, Costco's -9% international comps turn into a 4% gain when you strip out the effects of foreign currency swings. And finally, this year's March numbers were pinched by a calendar quirk that removed one sales day. That resulted in 1% lower reported comps.

The bigger picture
Costco's broader performance has been fantastic. The warehouser booked a 7%, 6%, and 5% comps improvement in the last three years. And 2015 is off to an even better start: Comps are up a massive 8% through the first two quarters. That growth puts a lot of separation between Costco and rivals such as Wal-Mart (NYSE:WMT) and Target (NYSE:TGT), who can't manage better than low single digit gains sales lately.

Two other metrics suggest further market share gains ahead for Costco: customer satisfaction and membership renewals. The company topped all major retailers in a recent shopper survey, nabbing an 84 score out of 100. Costco customers are especially jazzed by the company's low prices on everything from hot dogs to gasoline. That satisfaction feeds into a renewal rate for the subscriber base that hit 91% last year, up from 90% in 2013.

Valuation
The biggest risk in buying a high-performing business like that is paying too high a price. That's clearly possible here. Costco is valued at a steep premium to rivals.

Growth is comparable store sales improvement in the last fiscal year. Profit margin is over the past 12 months. Source: Company financial filings and Ycharts.com.

Two things jump out at me from this chart. The first is Costco's market-thumping growth discussed above. And the second is that Costco has the lowest profit margin of the group but the highest P/E valuation. You have to pay nearly 30 times last year's profit to own this business. But you can own Wal-Mart for a relative steal of 16 times earnings, even though the retailing giant boasts twice Costco's operating margin.

A worthwhile premium
However, Costco's business has a unique strength that makes it more valuable than the tiny profit margin would suggest -- its 70 million-member subscriber base. Those customers contribute over $2 billion directly to the bottom line in steady, predictable subscription fees.

That's why Costco is worth a higher premium than its retailing rivals. Investing in this business not only gets you better-than-average growth, but also lower earnings volatility than you'd see at any other retailer. That's a winning combination that I believe makes the stock a strong investment, even at today's prices.