Intel (NASDAQ:INTC) announced, in conjunction with its first-quarter earnings results and revised 2015 guidance, that it would cut back its capital expenditures for the year from $10 billion to $8.7 billion. The company had in January already reduced full-year capex from $10.5 billion to $10 billion.

Although I already went over the basics of Intel's capital expenditure reduction in my post-earnings write-up, this topic deserves a deeper dive. Without further ado, let's look at why Intel cut its capital expenditure forecast for the year and what this means for the company.

The vast majority of Intel's capital expenditures are related to its chip manufacturing plants. These factories are incredibly expensive to build and operate, which is why Intel has significantly higher capital expenditures than many of its peers that outsource chip production.

The slide below, which comes from Intel's 2014 investor meeting, shows that most (but not all) of Intel's capital expenditure budget is related to capacity: 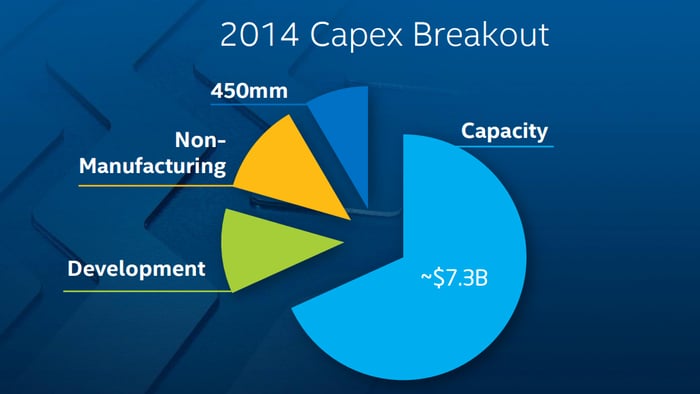 Understanding the January capex cut
This year's initial capex reduction, from $10.5 billion to $10 billion, according to Intel CFO Stacy Smith, was due to a number of factors. He said half derived from "basic blocking and tackling." This included negotiating better prices from equipment suppliers and pushing out "non-capacity related projects" from the year.

The other half of the reduction was due to increased confidence in 14-nanometer yields, which might have slightly reduced the amount of capacity the company felt the need to build out. Smith also said the company can start up 14-nanometer factories at a quicker pace than management had originally thought.

Smith said this ability gives Intel "a much more capital efficient ramp," allowing the company to "generate some savings."

How about the most recent cut?
Intel's latest capital expenditure budget cut -- down to $8.7 billion -- was driven by multiple factors. Smith said improved 14-nanometer yields helped, but the big driver seems to be that the company is now taking 22-nanometer capacity offline in order to migrate to 14-nanometer.

In this case, Intel said in its latest quarterly conference call that it would reuse 22-nanometer factory space and equipment for 14-nanometer production. This means the company can buy less new equipment to get its desired level of 14-nanometer capacity in place.

Finally, Intel said in its CFO commentary that part of this capital expenditure budget cut was also due to "alignment of capacity with demand," which might suggest Intel plans to put in less 14-nanometer capacity than it had originally planned.