Investing in real estate has the potential to produce consistent, market-beating returns that can produce wealth and income for generations to come. Here are three of the best-run REITs in the market that will do just that while allowing you to rest easy knowing your money is secure. 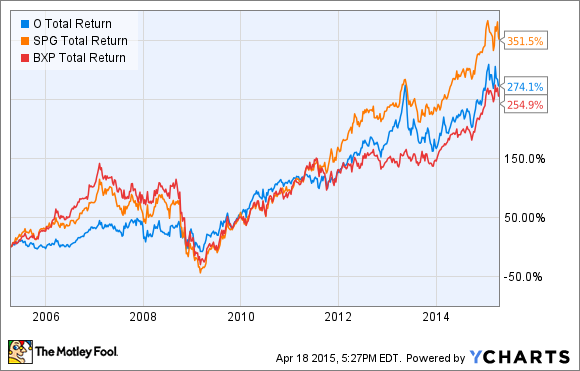 Office properties offer stability and growth potential
Boston Properties
(NYSE:BXP) is the largest "pure" office property REIT in the U.S., with a large portfolio of office buildings in the New York, Boston, Washington, and San Francisco metropolitan areas. The trust owns 41.4 million rentable square feet, which is more than 90% occupied with 7.3 years remaining on the average lease.

Boston Properties' tenants are some of the largest, most stable corporations in the world. The No. 1 tenant is the U.S. government, followed by Citigroup(NYSE:C) and Bank of America(NYSE:BAC). No non-government tenant makes up more than 2.5% of the portfolio, and the top 20 tenants account for just 27.3% of the total. In other words, the trust is well diversified, so even if one of the companies were to go out of business, the vast majority of Boston Properties' income would be secure.

Shareholders obviously benefit from the rent collected (which rises by an average of 3% per year) as well as appreciating property values, but there is another revenue stream that can supercharge returns: development. Currently, $2.1 billion of projects are in the development pipeline, and they're estimated to be worth substantially more than their budgeted cost once they're completed. In fact, Boston Properties estimates that $10.59 in value will be created per share by 2018 through development projects alone.

Boston Properties has averaged a total return of 14.4% over the past 10 years and has a strong history of paying special (as well as regular) dividends to its shareholders.

Monthly income and a rising dividend
I've written about Realty Income (NYSE:O) often, and I can't say enough good things about it.

This REIT specializes in freestanding retail properties and currently owns more than 4,300 properties that it leases to high-quality tenants such as Walgreen, FedEx, and Dollar General. As far as stability goes, it doesn't get much better than a 98.4% occupancy rate, all of which consists of long-term "net" leases, where tenants cover variable costs such as taxes, insurance, and building maintenance. In fact, even in the worst of times, the portfolio occupancy has never dropped below 96%.

The portfolio is diverse, with tenants representing 47 distinct industries and 49 states plus Puerto Rico. No single tenant represents more than 5.4% of revenue, and no industry accounts for more than 10%.

The stability is reflected in the company's track record. Realty Income pays a monthly dividend of approximately 4.5% that's been increased 79 times since the company went public in 1994. More impressively, shareholders have enjoyed a 17.1% average annual return on their investment since that time. Few companies have matched this performance over such a long time period. This is a Buffett-like return, and it can allow your investment to grow tremendously over the years.

A great play on rising consumer spending
Last but certainly not least, one of my favorite REITs is Simon Property Group (NYSE:SPG). If you like to shop at outlet malls, chances are you've been in one of Simon's properties. (You've probably noticed that I have a generally high opinion of retail REITs as long-term investments.)

This REIT owns 228 retail properties -- mainly malls, including many under the Premium Outlets and The Mills brand names, and these properties encompass an enormous 189 million square feet. According to the company, there is high retailer demand for quality locations, and there are plenty of opportunities to redevelop the existing portfolio, as well as develop new Premium Outlets from the ground up. The company has also been able to replace vacating tenants with new ones who are willing to pay even higher rent.

As of this writing, there is $2.1 billion worth of projects under construction, and Simon Property Group has the advantage of low-cost capital to build (or buy) whatever it wants. An S&P 100 company, Simon has the highest investment-grade ratings in the REIT industry.

Just like the other two REITS mentioned here, Simon has an excellent track record of performance. The company has produced shareholder returns averaging 15.6% over the past decade and has increased its dividend substantially, especially over the past few years. In fact, over the past four years, Simon Property Group has been able to increase its payout by an average of 19% per year.

The long-term compounding of REITs can make you rich
It's important to point out in any discussion like this one that an investment's past performance doesn't necessarily predict what it will do in the future. Having said that, all three of these REITs have delivered the kind of consistent, market-beating performance that make for excellent long-term investments.

As a final thought, consider that these three REITs averaged a 294% total return over the past decade. To put this kind of performance in perspective, a $10,000 investment at this rate of return would grow to more than $610,000 in 30 years and to more than $2.4 million after 40 years.

REITs like these could make your children and grandchildren rich.