Oil and gas production is an inherently risky business. As investors know quite well, energy commodity prices are notoriously volatile. This, however, is far from the only risk energy companies face as the annual reports of these companies are filled with many of the same risks ranging from environmental issues to competition for employees and services.

That said, each company also has its own unique set of risks that could impact it much more deeply than its peers. In the case of SandRidge Energy Inc (NYSE: SD), there are three risks its investors have uniquely been affected by over the past year, and these risks could continue to plague the company.

Its operations are very geographically concentrated

Focus is a good thing, as it can drive a company to be extremely efficient. SandRidge Energy investors have seen this firsthand as the company has uniquely been able to profitably turn the Mississippian Lime formation in the Mid-Continent into a growth driver for the company. By focusing on this play, which is outlined in the map below, the company has been able to overcome technical challenges and use its scale to drive meaningful results. 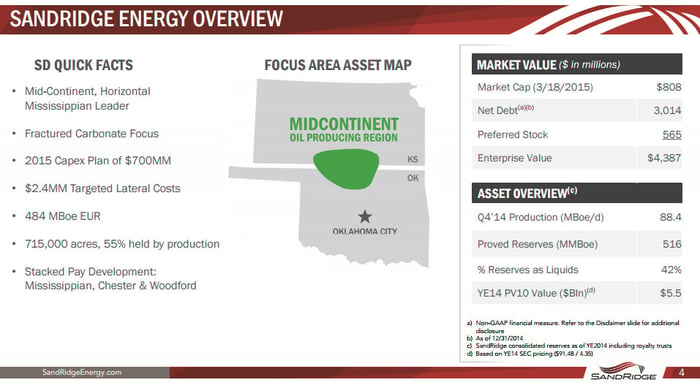 However, there's a downside to a lack of diversification, and SandRidge Energy investors have seen that, too.

As of the end of last year, approximately 88% of the company's proved reserves and approximately 80.9% of its annual production was located in the Mid-Continent, according to the company's annual report. The risk, as that report pointed out, is that, "this concentration could disproportionately expose the company to operational and regulatory risk in these areas."

The report pointed out that because of its geographic concentration, its operations could be affected by things such as "curtailment of production due to weather, electrical outages, treatment plant closures for scheduled maintenance or other factors," and that, "these factors could have a significantly greater impact on the company's financial condition, results of operations and cash flows than if the Company's properties were more diversified."

This risk has affected the company's operations, as it has been bitten by the weather time and again. Meanwhile, the lack of diversification means SandRidge can't shift its drilling program to higher-returning basis, like other drillers can, so it's left to focus on only its best spots in the Mid-Continent, which still aren't as profitable at lower oil prices than other shale plays.

Its West Texas natural gas business can't fulfill its obligations
Another SandRidge Energy-specific risk is the company's 30-year agreement with Occidental Petroleum (NYSE:OXY) to provide it with natural gas from the company's operations in the West Texas Overthrust, or WTO.

However, because natural gas prices have been low, there has been a disincentive for SandRidge to drill for gas to keep its production up to the level needed to fulfill its contract with Occidental. The company is therefore forced to pay Occidental for the shortfall. Not only that, but SandRidge ran into some problems with the SEC on how it accounted for the shortfall. Those issues acted as a weight on the stock and caused a long delay in the filing of the company's third-quarter report last year.

Its Royalty Trusts have proven to be a burden
SandRidge Energy created three Royalty Trusts that it still controls and owns stakes in. These entities have proven to be a value destroyer for the company. Under the terms of the trust agreements, SandRidge Energy was obligated to drill wells in the mutual interest areas by a set date. It fulfilled its obligations for two of the trusts, Permian Trust (OTC:PER) and Mississippian Trust I (OTC:SDT), last year, but it still has to fulfill its drilling obligation in the Mississippian Trust II (OTC:SDR) by the end of next year, and until that obligation is fulfilled, the Trust holds a $19.5 million lien against SandRidge.

Overall, these trusts have been a bust. While Sandridge did receive capital when it sent these entities public, they've been a massive value destroyer for investors -- including SandRidge, which owns at least 25% of each entity -- as we can see on the following chart. 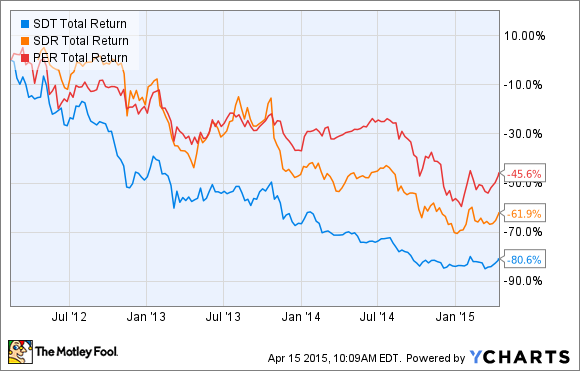 The company has slowly been selling down its stakes in the Trusts as these units have been a source of cash. However, given the value destruction of the Trusts, the value of SandRidge's holdings continues to decline. As such, these have acted as a weight instead of providing the company the steady source of capital it expected when they were created.

Investor takeaway
Not everything SandRidge Energy has done over the years has worked out as planned. The company thought its focus on the Mississippian would be an asset, but at times, it has been a burden. Likewise, the creation of the trusts and the agreement with Occidental have also proven to be burdensome on the company. All three unique risks could continue to plague the company if oil and gas prices remain weak.