This article originally appeared as part of ongoing coverage in our premium Motley Fool Income Investor service ... we hope you enjoy this complimentary peek!

First-quarter sales increased 3.8% year over year, landing at $32.0 billion. Earnings rose 21.4% to $1.02 per share, backing out non-operational gains from the company taking full ownership of Verizon Wireless in the year-ago period. Analysts were looking for earnings of roughly $0.95 per share on $32.3 billion in top-line sales.

Verizon's operating cash flows increased 42% to $10.2 billion, including a $2.4 billion one-time payment from American Tower (NYSE:AMT). Verizon thinks of that tower sale and leaseback deal as a move to monetize its tower infrastructure; American Tower sees it as a growth vehicle and addressable market expansion.

The company pointed to its Verizon Edge installment payment plan as a driver of hardware sales. "This pricing makes it easy to buy a new device with a low upfront cost and simple monthly installments," Verizon said, explaining how and why wireless device sales spiked $1.5 billion higher while service revenues remained flat.

Sales growth for 4G devices and connected tablets more than made up for dwindling business in 3G devices and basic phones. 72% of Verizon's retail postpaid customers now wield a 4G phone or tablet, driving a 54% year-over-year increase in mobile data usage. 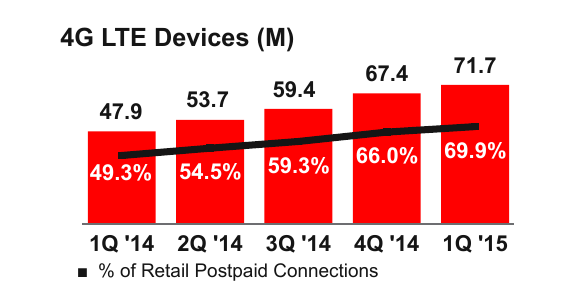 Verizon also reported 10.2% growth in FiOS wireline revenues, including a 9.4% boost in FiOS Internet subscribers and 7.9% more FiOS video accounts. These figures include FiOS subscribers in Texas, Florida, and California, who are on their way to becoming Frontier Communications (NASDAQ:FTR) customers. When that agreement closes in the first half of 2016, Verizon will receive $10.5 billion in cash in exchange for losing 27% of its FiOS video and Internet subscribers.

"We expanded our base of customers seeking a premium experience, and we grew revenues, earnings and cash flow during a quarter in which we also took significant steps to sharpen our strategic focus," said Verizon Chairman and CEO Lowell McAdam, summarizing a complicated quarter.