What: Units of Natural Resource Partners LP (NYSE:NRP) were being tossed aside by investors today. As we see in the following chart units were down more than 16% by the mid-morning. 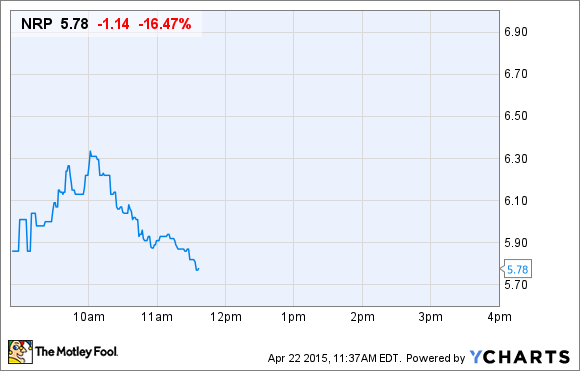 So what: Investors really did not like the company's new long-term plan to strengthen its balance sheet, reduce debt and enhance liquidity and are clearly voting against it by unloading their units. Investor disdain aside, Natural Resources Partners' goal is to get its debt-to-adjusted EBITDA ratio down from 4.9 times at the end of 2014 to 3.5 times by the end of 2017. However, at the core of the plan is a 75% reduction in the company's distribution, which will save the company about $130 million annually. It plans to use that money, along with cash on hand and additional cash it expects to generate, to pay down $500 million in debt by 2017. While it is the prudent course of action, given that investors bought units for that very distribution, they're now exiting in droves now that it's no longer at its previously robust level.

Now what: The downturn in the commodities market is forcing MLPs like Natural Resource Partners to make dramatic changes in order to improve their debt laden balance sheets. Cutting the distribution, while a hard choice to make, is proving to be necessary as its freeing up a lot of cash flow that can be used to pay off debt. It's a move that's intended to enable the company to be in a better position to grow in the long-term, but first needs to survive in order to thrive.