Westinghouse Air Brake Technologies (NYSE:WAB), or Wabtec, reported strong first-quarter results before the market opened this morning. Not only did the company beat analysts' estimates, but it raised guidance for the full year. Here's a quick look at the quarter and what to expect from the company in 2015.

Wabtec reported first-quarter sales of $819 million. Not only was that 18% higher than the first quarter of last year, but it beat analyst estimates by $16.8 million. Driving this strong growth was the company's Freight Group, which reported a robust $511.8 million in sales, well above the $385.5 million in sales it delivered in the same quarter of last year. Acquisitions helped to drive the Freight Group's growth, as Wabtec completed several deals over the course of the past year to boost that segment's growth. The company's Transit Group, however, delivered a bit of a softer quarter, as sales slipped from $309.7 million to $306.7 million.

Strong revenue growth from the Freight Group delivered strong bottom-line growth as income from operations hit a record at $148 million. That works out to 18.1% of sales, which is up from the 17.5% of sales the company delivered in the same period last year. Meanwhile, net income was $96 million, or $0.99 per share, which was $0.04 higher than analysts were expecting and 19% higher than the year-ago quarter.

Wabtec also begins the year with a solid balance sheet, as the company has $249 million in cash against just $421 million in debt.

A look ahead
Due in part to the company's strong first-quarter results, Wabtec now expects full-year earnings to be higher than its previous guidance. The company now sees full-year earnings hitting $4.10 per share, which is above the $4.05 per share the company guided to just last quarter. That's about 13% higher than last year's earnings of $3.62 per share. Wabtec also sees revenue increasing by about 10% this year.

Wabtec's financials continue their upward momentum. We see this in the following chart, which shows that earnings continue to grow at a faster clip than revenue, as the company has done a nice job boosting its margins so that more of its revenue falls to the bottom line. 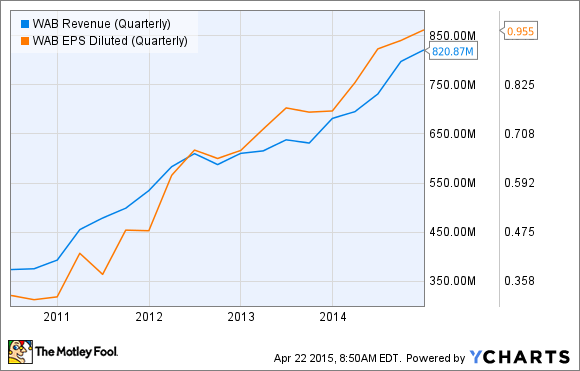 In commenting on the quarter and the company's outlook for 2015 in the earnings release, CEO Raymond Betler said:

With a strong first quarter, we're off to a good start for the year. We will continue to face challenges during the year, including global economic uncertainty and foreign currency exchange headwinds, but we expect to benefit from our strong backlog, and from ongoing investment in freight rail and passenger transit projects around the world. We're also pleased with our long-term growth prospects, which are driven by our diversified business model, balanced strategies and rigorous application of the Wabtec Performance System.

Investor takeaway
Wabtec, as Betler noted, is off to a very good start. Despite the fact that the company is facing some headwinds, it expects to overcome these issues with relative ease as it sees double-digit growth in 2015. Put another way, it looks like full speed ahead for Wabtec in 2015.