Many headlines about Apple (NASDAQ:AAPL) focus solely on iPhone sales, Apple Watch sales, or rumors about upcoming products. Amid all that noise, investors shouldn't lose sight of what matters the most: the fundamentals. Let's see what Apple's key numbers tell us about the stock's future.

In addition to those solid numbers, Apple still trades with a P/E ratio of 17. That makes it significantly cheaper than the S&P 500 and the NASDAQ 100, which trade at 21 and 23 times earnings, respectively.

Massive margins
In addition to being a fairly cheap stock, Apple's margins are tough to match. If we compare its operating margins to direct hardware rivals like Hewlett-Packard (NYSE:HPQ) and BlackBerry (NYSE:BB), Apple easily comes out on top. 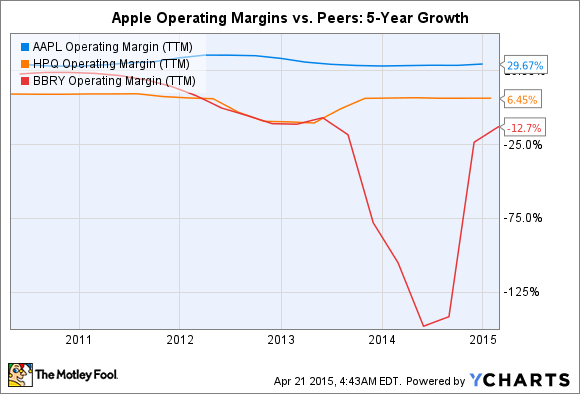 Apple's margins shouldn't be directly compared to Samsung's (NASDAQOTH: SSNLF), since the latter also manufactures other consumer electronics, appliances, semiconductors, and other products. However, investors should compare the gross margins of their flagship mobile devices.

41.5% might sound healthy, but it's actually the lowest margin of any iPhone. Nonetheless, Credit Suisse believes that robust sales will offset those lower margins. 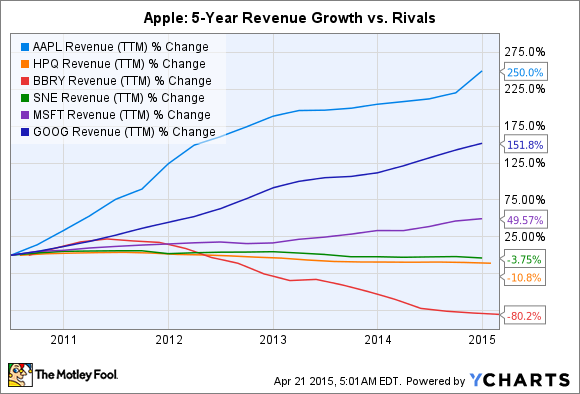 However, that growth has a glaring weakness -- its top-heavy dependence on iPhones, which accounted for 69% of its top line last quarter. During the quarter, Apple's iPhone revenue rose 57% year-over-year as shipments climbed 46% to 74.5 million units. If that growth eventually slips due to rising competition, Apple's stock could take a massive hit.

Apple is trying to diversify its top line with new products like the Apple Watch. But even if the device hits analyst expectations of around 20 million shipments in 2015, it would merely account for single-digit percentages of its annual revenue. Meanwhile, robust Mac sales, which accounted for 9% of Apple's top line last quarter, might offset weak sales of iPads, which plummeted 22% year-over-year.

Dividend growth and buybacks
Over the past 12 months, Apple has spent $11.2 billion on dividends and $44.3 billion on stock buybacks. Apple had a free cash flow of $59.7 billion during that period.

Investors should remember that Apple partially finances those dividends and buybacks by issuing debt. It does so to avoid being slapped by a big tax bill for repatriating its overseas cash, which stood at a whopping $158 billion (89% of all its cash and short term investments) at the end of the first quarter.

Apple reintroduced its dividend in 2012. As for buybacks, Apple faces a lot of pressure, particularly from activist investor Carl Icahn, to buy back more shares.

Bigger dividend boosts would encourage more investors to view Apple as a long-term investments instead of a short-term trading yo-yo, while additional buybacks will boost its earnings.

The key takeaways
Apple stock is cheap, its top and bottom line growth remain healthy, and the company will likely boost dividends and buybacks in the near future. Apple's overwhelming dependence on the iPhone is its Achilles' heel, but it will likely sidestep the commoditization of the smartphone market by carefully building its reputation as a luxury brand.