PepsiCo, (NASDAQ:PEP) is on a roll. Despite a brutal operating climate, PepsiCo beat first-quarter profit expectations in its report released Thursday evening. Large multinational corporations such as PepsiCo are getting hit hard from the strong U.S. dollar. The dollar has risen significantly in value against other currencies over the past year, which makes international sales worth less when they are converted back to United States money. If that weren't bad enough, PepsiCo is suffering from a prolonged decline in U.S. soft drink sales.

Nevertheless, PepsiCo still turned in a satisfactory quarter, thanks to strong results in its snacks business. PepsiCo's food division is the primary reason why PepsiCo has produced stronger growth than chief rival The Coca-Cola Company. And, as you can see in the chart below, this has translated into stronger total returns over the past year. 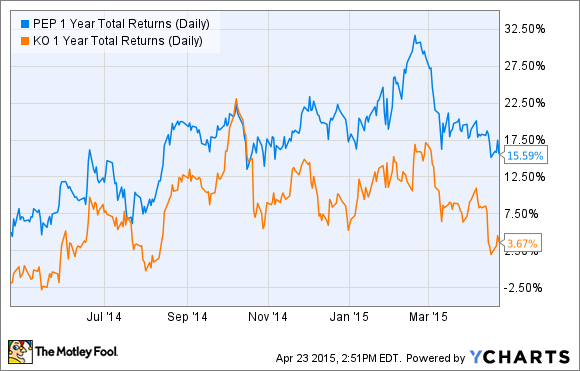 Including stock price performance and dividends, PepsiCo has outperformed Coca-Cola by nearly 12 percentage points over the past year.

PepsiCo's revenue is about evenly split between food and beverage. Each grew revenue last quarter, for different reasons. On the beverage side, PepsiCo was boosted by price increases. Organic revenue, which excludes the impact of currency fluctuations, grew 2% last quarter in PepsiCo's Americas beverages unit, thanks to a 3% price increase that helped offset a 1% decline in volumes. As far as the snacks business, volume growth boosted revenue. Frito-Lay grew organic revenue by 4% in North America, due to 3% volume growth.

PepsiCo's performance in the emerging markets was even more impressive. Organic revenue grew 5% last quarter in Asia, the Middle East, and Africa. The Latin America Foods division generated excellent 18% organic revenue growth. This is a clear sign that PepsiCo's strategy of aggressive penetration into underdeveloped nations is working very well.

Currency impact to remain, but so will cash generation
Going forward, PepsiCo doesn't see the currency headwind easing any time soon. That's unfortunate, because it will continue to weigh on revenue and profits. The company expects foreign exchange translations to shave a whopping 11% off of core earnings per share this year.

Fortunately, PepsiCo expects organic growth in 2015. Along with its first-quarter results, PepsiCo reaffirmed its forecast for 7% constant-currency earnings growth for the full year. This would be a strong performance, which demonstrates the power of PepsiCo's business. Currency is taking down the headline numbers, but investors should be more concerned with underlying growth.

Indeed, PepsiCo is still highly profitable, and generates a lot of cash. Management expects the company to generate $7 billion of free cash flow this year. In turn, PepsiCo will return a lot of that cash to shareholders. The company bought back $1.1 billion worth of its own stock last quarter. In addition, PepsiCo stock pays a solid 2.7% dividend yield.

For 2015, PepsiCo expects to return a total of $8.5 billion-$9 billion to shareholders. Of this, approximately $4 billion will be allocated to dividend payments, with the remainder to share buybacks. Such strong buybacks should help continue to grow EPS.

PepsiCo: Steady as she goes
PepsiCo is a textbook slow-and-steady stock. The company isn't likely to produce huge growth, but it doesn't have to. PepsiCo's business model has stood the test of time, and shareholders have been handsomely rewarded. PepsiCo's strong cash flow allows the company to buy back billions in stock each year, and it's also increased its dividend for 43 years in a row.

Investors shouldn't be scared of buying PepsiCo because of currency. The company is still generating organic growth, which is the most important thing. It's useful to remember that currency movements are often transitory, and are not always a true sign that a business is deteriorating. PepsiCo is still seeing strong demand for its products.