Intel (NASDAQ:INTC) didn't exactly invent the semiconductor or the microchip, but the company is an undisputed giant and leader in the chip industry. PCs may be falling out of fashion, but Intel is also a major supplier of server chips and hopes to conquer the mobile industry as well.

Knowing Intel inside and out is a major advantage if you plan to make an investment in the stock. Total mastery can take many years, but you can get a good sense of the company and its future prospects by shining a light on some of its most important financial ratios.

So let's do exactly that.

Intel by the numbers

Earnings growth
Look up "tenacious" in a good dictionary, and you'll find Intel's logo in the definition.

The company is not immune to economic disasters or to gigantic swings in the consumer market. Intel's earnings and sales took a beating in the aftermath of the 2008 worldwide economic meltdown, and took another uppercut to the jaw in 2012, when the PC market seemed destined for replacement by tablets and smartphones.

But the secret to winning a marathon fight isn't found in landing the hardest punches. It's all about getting back up again when everything is going wrong. And that's exactly what Intel does better than any other company.

Since the start of 2008, Intel's annual revenue has increased by 59% while adjusted earnings nearly tripled. During the same period, fellow sector titan Texas Instruments (NASDAQ:TXN) doubled its earnings on 25% higher sales, trailing far behind Intel on both counts. Intel's only serious head-to-head rival in the PC chip market, Advanced Micro Devices (NASDAQ:AMD), saw sales fall 5% while its earnings stayed firmly in the red.

So Intel doesn't always manage to deliver growth amid difficult circumstances, but the company always comes up with a plan to rebound from those dark, disappointing days.

Watchful investors can take advantage of these downturns and Intel's seemingly certain rebounds. For example, I built my own Intel position in 2012 when all the cool kids hated the stock. Now, I'm looking back at a market-beating 62% gain on that buy-in, as Intel surged back to good health right on schedule.

That's how a champion recovers from a bad beating.

Deep-discount valuation
I started my Intel position at a share price of just nine times trailing earnings. Earnings have improved by 10% since then, and the rest of my Intel gains rode in on an expanding P/E multiple.

Even so, Intel still looks undervalued at just 13 times trailing earnings. Texas Instruments shares have soared to 20 times trailing earnings, and AMD isn't profitable at all. Memory chip specialist Micron Technology (NASDAQ:MU) trades for 8.8 times earnings and also hangs out in my personal real-money portfolio. Other than that, I find it hard to locate another chip stock with anything like Intel's combination of low valuation ratios and solid business prospects.

The wild card
That brings us to the one glaring weakness in Intel's otherwise bulletproof business model: a low and still falling current ratio.

The current ratio is a measure of how a company's liquid assets match up to short-term liabilities. In other words, it's cash equivalents, inventory, uncollected IOU notes, and short-term investments divided by upcoming payments on debt and other outstanding bills.

A high current ratio indicates lots of financial flexibility in the short term, while a lower ratio points to potential cash crunches. Intel's ratio is lower than TI's, lower than Micron's, and even below perennial panic case AMD.

Now, a current ratio of 1.8 is a long way away from impending bankruptcy and doom. Intel still has more than enough cash to cover its upcoming bills. But it's never fun to see a company you own taking these dramatic dives in such an important metric: 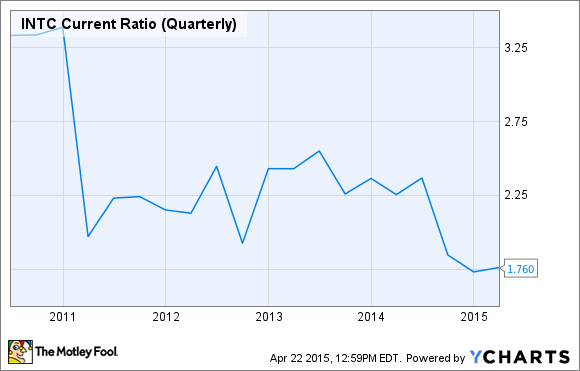 On the upside, Intel seems poised to start building a higher current ratio again. The company has been investing heavily in new manufacturing facilities in recent years, sacrificing dividend growth and strong cash balances for a toehold in the mobile chip market.

That investment surge is now largely behind Intel. The company is looking ahead at lower capital expenditures and a return to dividend growth after a nearly three-year pause. Given these changes, I would be surprised if Intel exited 2015 with a current ratio of less than two.

Final words
So there you have it. These figures describe Intel as a resilient bruiser that still sells at a deep discount, with some cash concerns that just might be nearing their end. That's good enough to keep some Intel shares in my own portfolio -- and maybe in yours too.