NXP Semiconductors NV (NASDAQ:NXPI) is on deck to announce first-quarter results, and investors need to pay special attention to these three areas of that report due April 29.

The game changer: Freescale merger progress
This really is the big one.

Six weeks ago, NXP announced a merger with fellow embedded systems specialist Freescale Semiconductor (NYSE: FSL). NXP's cash-plus-stock buyout of the Texas semiconductor veteran comes with a $16 billion enterprise-value price tag, including Freescale's $5 billion of net debt. At a market value of roughly $40 billion, the combined company will become the sixth-largest chip stock in the world.

The deal is also running on a fast track, expected to close as early as the second half of 2015. That breakneck completion schedule means that the two companies should already have a pretty good idea of how the planned integration will shake out.

The announcement was a bit light on detail for current owners of the two companies. We have a payment plan that taps into $1 billion of NXP's cash reserves, $1 billion of new debt, and 115 million freshly printed NXP shares. Current Freescale shareholders will then hold about 32% of the new entity's total share count, and the rest belongs to current NXP investors.

NXP also expects to extract positive earnings and cash flows from its new asset on day one, including $200 million of cost savings in the first year.

Given this lack of deep-dive facts, NXP really owes its investors a fuller explanation. This earnings report is a perfect platform for some of that action.

The megamerger is likely to take up some serious column space in the earnings release itself. You can also expect analysts to push management for more detail on the deal's progress in the earnings call.

Promises, promises: revenue growth
In the earnings call following February's full-year report, NXP CEO Rick Clemner shone a particularly heavy spotlight on a couple of items. For one, he noted that NXP saw "extremely strong revenue growth" in 2014, with a 17% year-over-year uptick in total sales.

The company's official sales guidance for the first quarter points to another quarter of strong growth. The midpoint of the given guidance range sits 18% above the year-ago period's results, and analysts are sticking close to that figure in their forecasts.

Management's projections are based on typical seasonal trends on top of a generally stronger base rate of growth.

NXP hasn't offered any revenue guidance beyond this quarter. Analysts, however, expect things to slow down a bit. Second-quarter sales are seen to land 14% above the same period in 2014, and full-year sales growth should dwindle to just 11%.

You can check these unofficial forecasts against the official second-quarter guidance we're about to get. You can also fit first-quarter results and the new guidance against the seasonal and long-term sales growth trends in this handy chart: 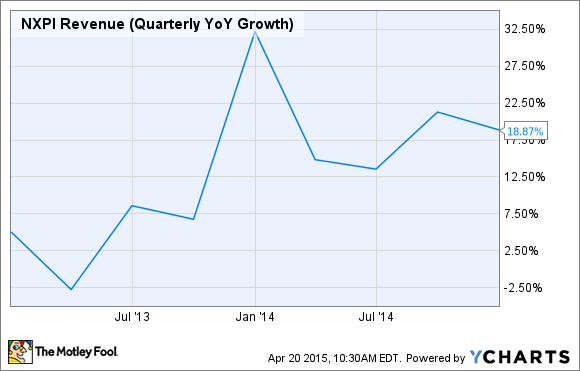 Tying back into the Freescale buyout, you should know that NXP's sales have grown a total of 30% larger over the last two years. Freescale's revenues have increased by 17%.

What management actually tracks: adjusted operating profits
Finally, Clemner underscored that NXP's management sees non-GAAP operating profit as "the key performance metric for NXP." If it's of paramount importance to the company's own leadership, investors should keep a close eye on this metric as well.

You can compare this week's report to the larger full-year trend or to the more directly comparable year-ago quarter. The official word is another quarter at the 25% level, with roughly $373 million in non-GAAP operating profits.

Either way, this is the yardstick that NXP's own management measures its success against. If these figures come up short, you should expect the company's leadership to acknowledge it as a difficult quarter. It's also where the executive team gets to walk the talk and show off a fantastic quarter by the numbers.