If Apple sells 20 million watches at the average pre-order selling price of $707 recently reported by Slice Intelligence, this new product line would generate about 6% of Apple's projected 2015 revenue.

But besides Apple, other companies could benefit from rising Apple Watch sales. Let's take a look at two such players: Universal Display Corporation (NASDAQ:OLED) and InvenSense (NYSE:INVN).

As a result, OLED screens have a wider range of brightness and contrast than LCD ones, but cost more. Universal Display generates most of its revenue by licensing out OLED patents and selling the materials to produce those screens. Both divisions posted robust top line growth in 2014:

The Apple Watch, Apple's first OLED device, uses a screen from LG. Samsung will also likely supply OLED screens for the Apple Watch in the future, according to The Electronic Times. Either way, the Apple Watch could secure OLED screens as the industry standard for high-end smartwatches. Moreover, Apple's interest in OLED indicates that it might eventually add OLED screens to larger devices, namely its iPhones and iPads.

Thanks to those catalysts, Universal Display stock has rallied 60% over the past 12 months. However, the stock isn't cheap at 52 times trailing earnings. Moreover, its net income fell 43% year over year in 2014 due to rising R&D and material costs. 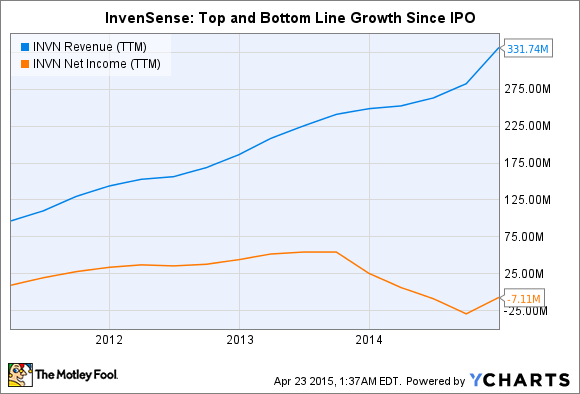 InvenSense's bottom line weakness is due to its position as a supply chain company. If MEMS rivals like STMicroelectronics (NYSE:STM) undercut its prices, InvenSense has to match those prices to retain major clients like Samsung and Apple. InvenSense provides the accelerometer and gyroscope for Apple's iPhone 6.

Earlier this year, InvenSense CEO Behrooz Abdi claimed that the company has a 100% market share in smartwatch motion sensors. However, those sensors may not be found in the first-generation Apple Watch, according to analysts at Rosenblatt Securities.

If the Rosenblatt Securities analysts are correct, InvenSense's share of the smartwatch market will plunge, since the Apple Watch will likely dwarf all other rivals in terms of sales.

However, Apple Watch sales could also lift sales of other smartwatches across the market, which would generate fresh revenue growth from other devices. In addition, InvenSense might still be able to secure a position in future versions of the Apple Watch. But like Universal Display, InvenSense stock isn't cheap. Even after sliding 25% over the past 12 months due to pricing concerns, it still trades at 4.3 times sales, compared to an industry average of 2.6.

Do your due diligence
I'm not a big fan of supply chain companies, since they don't have much pricing power against market dominating companies like Apple. Moreover, OEMs switch suppliers frequently, which makes it tough to take a long-term position on many supply chain stocks. Investors should recall the cautionary tale of GT Advanced Technologies, the now delisted maker of sapphire displays, to understand those risks.

Universal Display's business model will hold steady for at least the next few years, since its key patents run through 2020. Its foothold in the Apple Watch could encourage Apple to eventually upgrade its iPhone and iPad screens with OLED technology.

InvenSense, however, is a much riskier play, since rivals like STMicroelectronics offer comparable MEMS. However, it continues to do plenty of business with Apple and Samsung, and will likely remain a leading supply chain company for both companies in the near future.