Dividend-paying stocks are, by and large, relatively pricey. The very fact that companies reward their shareholders this way helps increase demand for their shares. So the amount of the payout is often baked into the stock price.

But there are always bargains. Numerous dividend-paying stocks trade at levels well below those of their higher-profile peers. I've sniffed around a bit, lifted a few rocks, and found three issues under $10 that could potentially make good returns for income investors.

GAIN Capital (NYSE:GCAP)
The online stock brokerage segment is tight and competitive, with the likes of Charles Schwab, TD Ameritrade, and E*TRADE Financial duking it out for business.

So one sensible way to squeeze into this crowd and profit is by finding a niche, or several -- enter GAIN Capital. This small firm thrives by providing services in such areas as foreign exchange, options, and contracts for difference (a form of stock derivative).

Fueled by a bullish stock market and, consequently, increased volumes, its past two quarters have been particularly strong. In Q4 the firm notched its highest-ever quarterly revenue figure ($115 million) and recorded a more than four-fold year-over-year increase in bottom line to $18 million.

GAIN Capital is young, ambitious, and striving. Earlier this month it announced that it closed the acquisition of City Index, a UK-based specialist in the types of markets it concentrates on. This should greatly improve its position in those segments, and, if well integrated, could add nicely to revenue and profitability.

In its brief life GAIN Capital has consistently paid a regularly quarterly dividend of $0.05 per share. That annualizes to a yield of 2.1% at the current stock price. 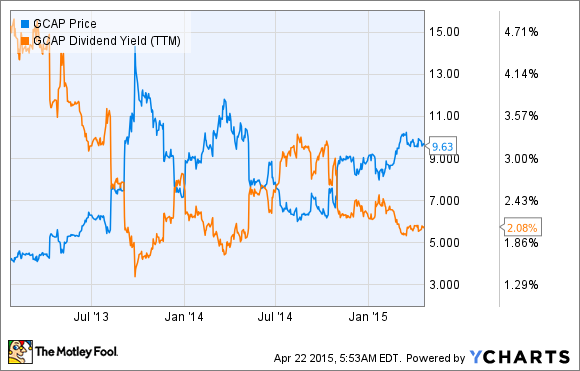 Companhia Energetica de Minas Gerais (NYSE:CIG)
Brazil's an immense country that needs a great deal of electricity. In the south and southeast of the country, this firm -- known as Cemig -- is happy to provide it. 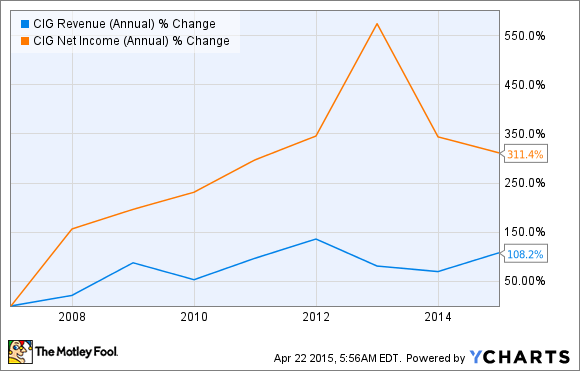 2014 was a challenging year for the Brazilian power industry, with electricity consumption recording its lowest growth figure (2.2%) since 2009.

This was due to the drought the country began to experience during the year, putting a strain on hydroelectric assets, the backbone of its power generation industry, and cranking up prices for wholesale electricity.

The current situation will likely worsen, as reservoir levels are rapidly dwindling to levels too low to keep turbines operating. So the entire industry is scrambling to diversify into other sources of power generation, chiefly renewables like solar.

Cemig is no exception; at the moment, it currently has around 730 megawatts of generation capacity under construction or contracted. That's small when matched against its end-2014 total capacity of over 7,700, but the company has another 6,380 or so in development. Once past the current drought and its associated difficulties, this should help the company stay profitable in the long term, and keep cash coming in to power the dividend.

Cemig's most recently declared regular dividend amounted to nearly $0.07 per share. That yields almost 4% on the current price of the company's American Depositary Receipts.

Windstream (NASDAQ:WINMQ)
For over eight years, this telecom reliably handed out a distribution of $0.25 per share every quarter. On the back of a low share price, that pushed the dividend yield into double-digit territory. 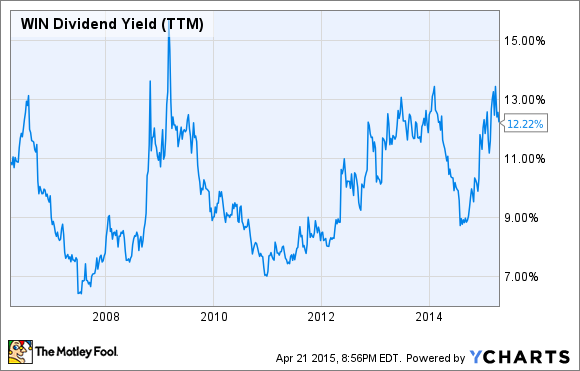 That nice quarter-per-share payout's going the way of the rotary phone, because later this quarter the company will cleave itself in two.

The first chunk, Communications Sales & Leasing, is to be a real estate investment trust holding choice Windstream networking assets. The second will inherit the name Windstream, and act as the operating company technically leasing those assets.

According to Windstream, after the split stockholders will be paid an aggregate of $0.70 in annual dividends between the two successor firms. Yes, it's a 30% cut from the current level, and alarming at first blush.

But a closer look reveals that the company is right to save a bit of dough. It was recently spending nearly 90% of its annual free cash flow on dividend payments. In addition to easing that burden, Windstream estimates that the spinoffs will reduce the current firm's monster debt pile of over $8 billion by around $4 billion (although it hasn't specified exactly how it will achieve this).

It should also save on payments to Uncle Sam once profitability returns -- REITs enjoy significant tax advantages as long as they pay at least 90% of their taxable income in the form of dividends.

Windstream hasn't yet released further details of the dividends for CS&L and Windstream II. The promised $0.70 aggregate payout would yield 8.4% at the parent firm's current stock price.