Texas Instruments (NASDAQ:TXN) just reported results for the first quarter of fiscal year 2015. The release left analysts and investors wanting more, both in the reported quarter and in forecasts for the coming period. TI's shares plunged as much as 9.5% lower the next day, and the day closed at a 6.6% price drop.

Here are five of the most enlightening nuggets of wisdom they had to share in this call, and I'll help you put it all into proper context.

"We believe that free cash flow growth, especially on a per-share basis, is most important to maximizing shareholder value in the long term.

"This is a 2 percentage-point improvement from the year-ago period that we believe reflects our improved product portfolio and the efficiencies of our manufacturing strategy, which includes our growing 300 millimeter output, and the opportunistic purchases of assets ahead of demand." -- IR director Dave Pahl

This is music to the ears of dividend fans and income investors. The "maximizing shareholder value" bit is something of a mantra for TI executives, quoted early and often.

It's not just empty words, since TI can back it up with solid cash flow figures. If cash flow growth is what the company aims for above all else, it's all working out according to plan.

And if you just assumed that every company was out to grow its cash flows over time, it's time to rethink that basic idea. It's far too easy to find examples of weak cash flow growth even in the upper echelons of TI's own industry.

For example, TI has increased its free cash flow by 86% over the last five years. Fellow analog chip titan Linear Technology (NASDAQ:LLTC) only managed 23% cash-flow growth over the same period while Analog Devices (NASDAQ:ADI) saw its incoming cash lightening up by 8%: 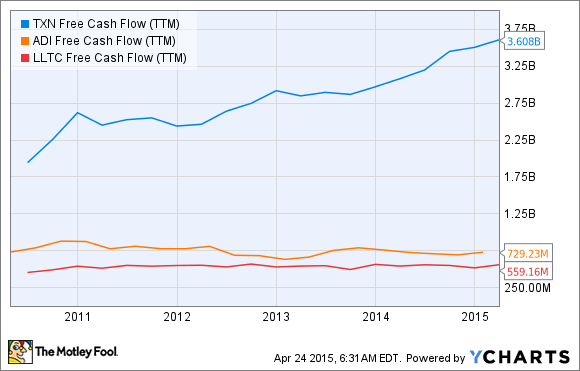 I'm not bashing Linear Technology or ADI here, mind you. They are TI's two largest rivals in the analog chip sector. Both are large and well-run companies creating plenty of shareholder value. Their gross and net margins outshine Texas Instruments', and their dividend yields are just as generous. Linear is also a longtime recommendation of our own Motley Fool Stock Advisor newsletter service. There's really nothing wrong with what these companies are doing.

But no, they can't match TI's fantastic cash flow growth. It's what the company strives for, and TI knows how to make it happen.

"We believe free cash flow growth, especially on a per-share basis, is most important to maximizing shareholder value in the long term and will be valued only if it is returned to shareholders or productively invested in the business.

"As we've noted, our intent is to return 100% of our free cash flow plus any proceeds we receive from the exercise of equity compensation minus net debt retirement." -- CFO Kevin March

There's that shareholder value mantra again, with a bit of fresh explanation.

You see, TI isn't just collecting cash flows to sit on a growing pile of gold coins, like Scrooge McDuck. Instead, the company has promised to return it all directly to the pockets of shareholders via a mix of share buybacks and rising dividend payouts. All of it.

The company got serious about dividend growth in 2004, and has increased its payouts every year since then. The recession that started in 2008 caused a slowdown in annual dividend boosts, but never forced TI to take its foot entirely off the dividend accelerator. 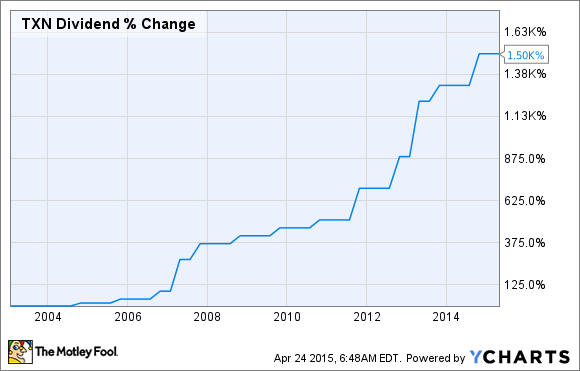 "We believe that the first quarter demonstrates the strength of TI's business model. While we are not immune to demand and currency changes, their effects are softened by the diversity of our portfolio and our markets." -- CFO Kevin March

"Not immune" to currency effects and market shifts is a major understatement. Those were the exact things that made TI miss sales and earnings expectations in the first quarter, and then forced management to set disappointingly low guidance targets for the coming quarter.

Still, TI's diversity really is impressive. Fearing a bad PC systems market? Texas Instruments derives just 5% of its revenue from that niche. Wireless infrastructure? Less than 10% of TI's sales. It's a long list that includes over 100,000 different products. It's a double-edged sword that also limits how far a single market can move TI's needle in the right direction, but overall, diversity leads to a long-term ride with fewer dramatic bumps in the road.

"From an end market perspective versus a year ago, automotive grew with most sectors inside this market growing at double-digit rates. Industrial had broad-based growth. Personal electronics grew, although growth in PCs was lower than we expected. Communications equipment declined due to wireless infrastructure, and enterprise systems grew." -- IR director Dave Pahl

Again, none of these moves will do anything terribly dramatic to TI's overall results. But you can be sure that TI's management watches these shifts closely, and always stands ready to move around the company's engineering assets and talents to capture whatever high-growth, high-margin opportunity is taking shape.

TI's growth doesn't just happen automagically. This asset management is a huge part of the company's long-term success story. And that fact ties right into the final management insight:

"We do have several significant competitive advantages, the combination of which we believe is pretty difficult for anybody else to replicate, and it helps us deal with any notion of cyclicality or noncyclicality. Those advantages include that we've got the broadest portfolio in the industry, which really means engineers start their design work by looking at us first.

"We enjoy very low-cost manufacturing for all the reasons that you've heard us talk about for the last few years, including our 300 millimeter wafer fabs. We have the broadest sales channel, in fact probably 3 to 4 times larger than our nearest competitor.

"We play in an extremely diverse set of markets with long-lived products that enjoy significant cash returns to our shareholders for a long time. We think that's what's really important to deal with, whatever may be happing in market cycles and just really make sure that we're a lot more competitively advantaged than everybody else." -- CFO Kevin March

There's not much I can add to this. It's best to read these three paragraphs a couple of times and let them sink in.

The next time you're looking for an investment opportunity in the semiconductor market, these are the unique qualities that Texas Instruments' own management sees setting the company apart from the competition. Take that, add the single-minded focus on long-term cash flow growth, and you'll have something to think about.

TI isn't perfect. Other companies can beat its margins, rival its sales growth, and win out in head-to-head comparisons for the next game-changing mobile gadget design. But if you want a diverse and experienced chip designer with an unmatched sales force and unique manufacturing abilities, TI just might be the stock you're looking for.

And right now, this quality company is selling at a modest discount thanks to one disappointing earnings report. Short-term panics fade but strong fundamentals and solid business models aren't going away.