Celgene's (NASDAQ:CELG) share price fell a few percentage points today after releasing first quarter earnings. It wasn't all that bad of a quarter for the highly watched drugmaker, but with all the talk of a biotech bubble, investors can be jittery when a biotech isn't knocking it out of the park.

The scary thing is, for Celgene, a 20.4% increase in product sales is considered less than a homerun. Most companies would absolutely love that kind of growth, especially considering the maturity of Celgene's top seller, Revlimid, which was first approved a decade ago.

Sales of power-hitter Revlimid grew 17% year over year, which would have been 19% at constant currencies. The key to keeping the sales growing has been expansion of the drug into new indications. Celgene recently gained approval for Revlimid for newly diagnosed multiple myeloma in the U.S. and EU. It's already started marketing for the new indication in the U.S., where sales were up 26% year over year, and is working on gaining EU reimbursements, which should help sales continue upward next year.

The EU will be key for Celgene's crafty-lefty Abraxane as well. It's the early days of the EU launch in pancreatic cancer, and Celgene is still working on gaining reimbursement for the drug in non-small cell lung cancer. Sales of Abraxane outside the U.S. grew 48% year over year -- compared to just 12% year-over-year growth in the U.S. -- but international sales are less than half of U.S. sales, so there's still plenty of room to grow further. With sales of $223 million just in the first quarter, Abraxane is poised to be a blockbuster by the end of the year.

Pomalyst, which also treats multiple myeloma (but only after patients have failed Revlimid and other drugs), is also getting close to blockbuster status. Sales of the reliever reached $199 million thanks to 46% year-over-year growth. Further growth will come from patients using the drug longer -- overall survival data was recently added to the U.S. label -- and we should continue to see more penetration in the EU, where the drug goes by Imnovid, seeing as how the launch is further behind the U.S. launch. Longer term, growth could come from using Pomalyst with other drugs, but those trials are only in phase 2, so it'll be some time before the combinations become standards of care.

The launch of Cengene's young star, Otezla, seems to be going well with prescriptions for the first year of sales well ahead of recent launches of other drugs that treat autoimmune diseases. 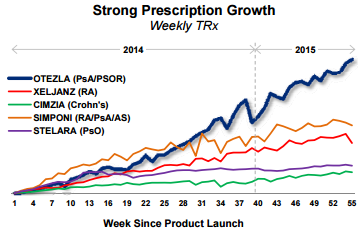 In January -- the latest month of data available -- Celgene was capturing 33% of psoriatic arthritis patients and 39% of psoriasis patients that are starting, changing, or adding additional therapies, which is a higher percentage than all other drugs and bodes well for future sales growth.

On the bottom line, adjusted earnings per share grew 29% year over year to $1.07 per share. Earnings grew faster than revenue because Celgene has been able to keep expenses from growing as fast as revenue. A lower tax rate and share repurchases also helped boost the earnings per share number. Celgene still has $2 billion to spend under its existing stock repurchase program.

If Celgene wants to continue to justify its valuation, the company had better hit the batting cages.