Whether you realize it or not, our nation has been at war for more than five decades -- not against an enemy on foreign soil, but against a product found in most grocery and liquor establishments: tobacco.

Since Surgeon General Luther Terry issued his fateful report on smoking and health in 1964 that decidedly linked smoking to higher risks of getting lung cancer and heart disease, the government and the Centers for Disease Control and Prevention have been working side by side to educate the public about the risks of smoking to help them kick the habit.

This ongoing campaign to educate teens and adults appears to be working.

Since the mid-1960s through Dec. 2014, the rate of adult smokers in the United States has fallen from greater than 40% to just 17.8%, according to the CDC. This 17.8%, or 42.1 million adults still smoking, represents the lowest percentage of adult smokers on record. The CDC introduced an aggressive goal in 2011 of a 12% adult smoking rate by 2020, but this achievement may prove too lofty in such a short time span. 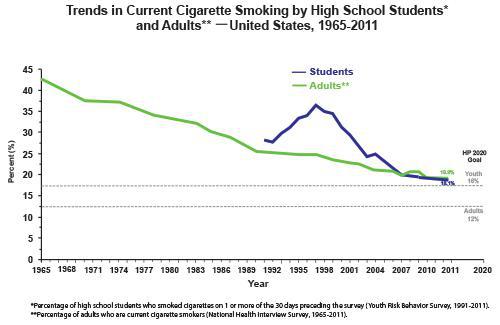 Though there is improvement, there are still concerns
While clear progress is still being made against adult smoking rates, some 42 million adults continue to smoke, including a number of younger adults and high school students, which aren't included in the above figures. One of the biggest challenges regulators have faced is how to discourage teens and young adults from trying cigarettes when the product is often portrayed as being "cool" during a period when they are highly impressionable. Per the U.S. Department of Health in 2012, some 95% of currently smokers in their 30's had tried their first cigarette by the age of 21.

Compounding this problem is that there are an increasing number of alternative for teens and young adults to turn to that could get them hooked on the idea of smoking, or nicotine itself. Access to electronic cigarettes in a variety of flavors, as well as hookahs, could provide a potential gateway for ongoing nicotine reliance.

One state, however, appears to have had enough.

One state taking its gloves off in the war against tobacco
According to a bill that's now made it onto the desk of Hawaii Governor David Ige, SB 1030 (the name of the bill) would make the new legal age to buy tobacco products (which includes electronic cigarettes) 21. While New York City has raised the legal age limit to buy tobacco products to 21, no state has thus far made the move to raise its minimum smoking age limit from 18 to 21.

If teens or young adults below the age of 21 are caught with tobacco products, or attempting to buy tobacco products, SB 1030 suggests they be hit with a $10 fine for the first offense, and $50 or 48-72 hours of community service thereafter. Businesses caught selling to those below the legal age limit would face a stiff initial fine of $500, which would increase to $500-$2,000 thereafter. A University of Hawaii study of ninth and tenth graders suggests this figure could be closer to 30%, as noted by The Washington Post. The point being that students and young adults are turning to new devices to get nicotine, and the long-term safety of those devices isn't yet known.

This is just one of many punches for Big Tobacco
For Big Tobacco, the hits just keep on coming. These companies have been suffering from declining tobacco sales for some time, and now they could be threatened by Hawaii and potentially more states jumping on board with raising the legal age to purchase smoking products to 21.

A more recent concern for the industry is what the Food and Drug Administration could do with its new method of attracting current and former smokers: electronic cigarettes. If the FDA decides to label electronic cigarettes and their liquids as tobacco products, they would then fall under the strict safety and manufacturing guidelines of the FDA.

Right now, there is little known about the liquids being used in electronic cigarettes, and recent studies -- such as the one conducted by National Jewish Health that discovered liquid vaping solution leads to inflammation of epithelial cells in users' airways and a higher risk of respiratory viral infections -- have suggested electronic cigarettes may not be as safe as they're perceived.

This would be worrisome for Reynolds American (NYSE:RAI) and Lorillard (NYSE:LO.DL), which are in the process of trying to gain approval from the Federal Trade Commission to merge. Although Lorillard is the company behind Blu, the most dominant electronic cigarette brand in the U.S. by a long shot, the merger between these two companies meant the divestiture of Blu and both companies instead focusing on Reynolds American's Vuse brand. Tougher FDA regulations could halt any chance Vuse has of taking off or closing the market share gap between it and Blu.

A grim reality for Big Tobacco
Hawaii's looming bill provides one more point of evidence that the future of the U.S. tobacco industry, including its smoking alternatives, isn't very bright.

For now, tobacco companies such as Lorillard and Reynolds American are able to use the addictive qualities of nicotine to raise prices despite declining cigarette volumes in order to continue growing their profits. However, tobacco producers can only boost pricing so much before consumers push back and begin to smoke considerably less.

With regulations surrounding electronic cigarettes looking as if they'll tighten in the coming years, it's looking as if your best bet as an investor is going to be to keep your money parked far away from U.S. tobacco producers.

In This State, the Gloves Have Come Off in the War Against Tobacco @themotleyfool #stocks $RAI $LO.DL Next Article
Current