As Tesla Motors (NASDAQ:TSLA) attempts to take its electric-car brand international, one of the most important markets for Tesla to prove itself in will be Japan -- the world's fourth-largest automotive market. The market is key for several reasons. Beyond its meaningful sales potential, Japan is also arguably the world's most supportive country of hydrogen fuel cells -- a competing green vehicle technology. Gaining early traction in this market, therefore, could impact the country's view of battery-powered electric vehicles.

Key to Tesla's expansion in any market is its rollout of Supercharging locations, which enable Tesla owners to drive beyond 270 miles. In Japan, Tesla is getting ready to take its Supercharging network to the next level.

Supercharging Japan
"We're looking forward to Japan being one of our most important markets in the world for Tesla," CEO Elon Musk told an audience in Japan during an event last September as the company celebrated its first Model S delivery to the country. He went on to promise that, at some point in 2015, Japanese Model S owners would be able to travel "anywhere in the four islands just using the Tesla Supercharger network."

While Tesla has begun building locations in Japan, it still has a ways to go before owners can easily travel throughout the four islands. Since this event last September, Tesla has installed six Supercharger locations -- only a fraction of its 425 locations worldwide. 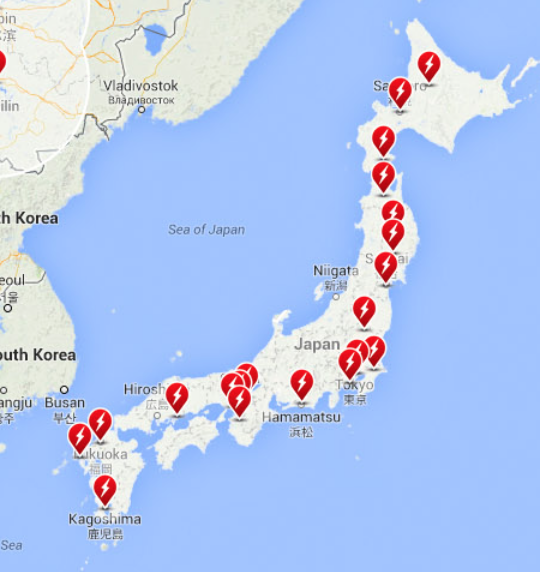 But a rapid rollout of Supercharger locations in Japan is still on Tesla's agenda, according to an interview this week with Musk on Japanese news site Nikkei. Tesla is going to make a "big investment in charging infrastructure throughout Japan," said Nikkei's Manya Venkatesh, paraphrasing Musk.

Furthermore, while Tesla intends to eventually have virtually all of its Superchargers tapping into solar, the company seems to be giving solar a higher priority in Japan.

"We'll buy utility power that's coming from solar panels, or we'll have solar panels on the charge station itself. There will be no impact to the electrical grid in Japan," Musk said in the interview.

An important market
Before Tesla entered the Japanese market, Musk noted that the company would pay special attention to how it does business in the country.

"[Japan is an] important market for us, by the way. We are going to take the Japan market very seriously," Musk said during the company's second-quarter earnings call. "I know that a lot of car companies that don't take the Japan market really seriously, but I think we are going to do that. [People in Japan are] very discerning and, actually, I would consider it a great honor if the Japanese were to actually buy our car."

Beyond the fact that Japan is a large market for premium autos, and that Japanese are "discerning" customers, Tesla is also certainly well aware that the country, as well as Japanese automaker Toyota, is pushing hydrogen fuel cell vehicle technology. Being as green as possible, therefore, will likely aid Tesla's public relations in the country.

It's also worth noting that Tesla already has significant business in Japan beyond the Model S. Tesla batteries are made by Japanese company Panasonic.

"The heart of the Model S is Japanese," Musk said in Japan last September.

Tesla is likely hoping Japanese vehicle sales will eventually make it into its top five markets. Will a solar-backed Supercharger ramp-up help Tesla persuade the Japanese to believe in an optimistic future for battery-powered vehicles?