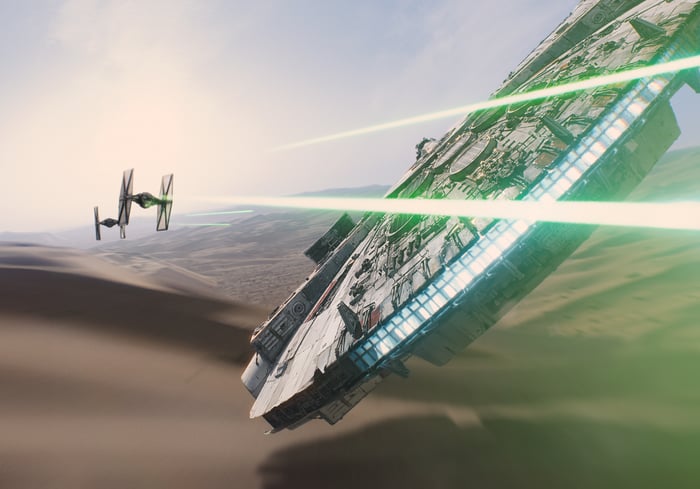 Star Wars: The Force Awakens should push Disney's film and TV profits to new highs, but not as fast as some might like. Image credit: StarWars.com.

May the fourth be with you! That's the rallying cry for what's become Star Wars Day, an annual rite among longtime fans of the Star Wars universe of films, cartoons, comics, toys, books, games, and everything else either licensed or made by Disney's (DIS 0.13%) Lucasfilm division. In honor of the day, we're taking a closer look at the likely financial impact of Star Wars: The Force Awakens, due in theaters this December. It's probably not what you think.

Get ready for another record
Not that it'll lack impact. Huge fan interest in the newest trailer for The Force Awakens suggests a record-breaking performance at the box office:

Look at that table again before you move on. The Force Awakens not only earns higher approvals but also 44% more views than the final trailer for Age of Ultron, screening at what should be the apex of interest in the film. An analysis by Networked Insights points a record $240 million domestic opening this weekend. Other data point to Age of Ultron netting $2 billion at the global box office. That Star Wars:The Force Awakens is more grabbing at this point should be telling.

How this mouse gets his cheese
So 2015 is going to be the biggest year in the history of Walt Disney Studios, right? Wrong; 2016 is going to be much bigger. Here's why:

See the pattern? Disney ends its fiscal year on or around September 30, which means big-ticket November releases from Marvel and Disney Animation act as catalysts for the year to follow. In 2015, these kick-starters include Pixar's The Good Dinosaur (Nov. 25) and, of course, Star Wars: The Force Awakens (Dec. 18). Follow that with Captain America: Civil War (May 6, 2016) and Finding Dory (June 17, 2016) and you've four potential blockbusters due in fiscal year 2016.

To put this in perspective, Disney Studios broke records in fiscal year 2014 on the strength of Frozen ($1.27 billion worldwide), Captain America: The Winter Soldier ($714.8 million), Maleficent ($758.4 million), and Guardians of the Galaxy ($774.2 million). Considering what we already know about fan interest in The Force Awakens, it wouldn't be surprising to see more records broken this fiscal year and next. Heck, we're only a quarter into fiscal year 2015 and already Disney Studios is on track to eclipse $2 billion in operating profit. Next year, Disney could earn close to that just on the strength of The Force Awakens and Captain America: Civil War, which teams two box office favorites in Chris Evans' Cap and Robert Downey Jr.'s Iron Man.

Three more things should stand out as you look at the table above:

Star Wars: The Force Awakens is the next to come from Disney's franchise factory. Whether or not it helps the House of Mouse eclipse $3 billion in studio operating profit in fiscal year 2016 is anyone's guess. Regardless, one thing is certain: Thanks to a growing roster of bankable film projects, The Force is strong with this business.

Tim Beyers still owns his share of Star Wars comics. He's also a member of the Motley Fool Rule Breakers stock-picking team and the Motley Fool Supernova Odyssey I mission and owned shares of Apple and Disney at the time of publication. Check out Tim's web home and portfolio holdings or connect with him on Google+, Tumblr, or Twitter, where he goes by @milehighfool.