Please ensure Javascript is enabled for purposes of website accessibility
Log In Help Join The Motley Fool
Free Article Join Over 1 Million Premium Members And Get More In-Depth Stock Guidance and Research
By Matthew DiLallo - May 5, 2015 at 3:02PM

Rosetta Resources Inc. reported first-quarter results and investors didn’t like what they saw.

What: Rosetta Resources's (NASDAQ: ROSE) stock was hammered today after reported its first-quarter results. By mid-afternoon the stock was down over 13%, however, it did bounce off those lows as we see on the following chart. 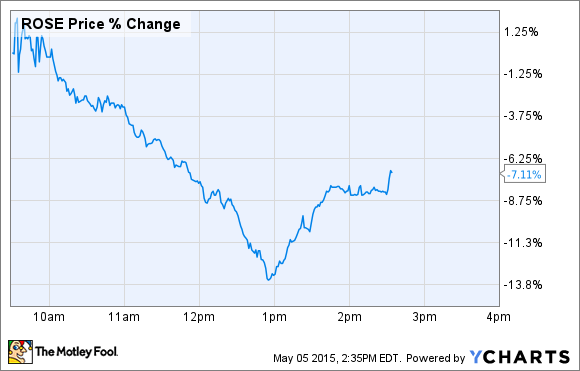 So what: Rosetta Resources' first-quarter report wasn't anything to write home about. The company was able to increase its production to 66,000 barrels of oil equivalent per day, or BOE/d, which is up 21% over the prior year and toward the high end of its guidance range. However, production did decline from last quarter when Rosetta averaged 73,000 BOE/d. Meanwhile, its lease operating costs actually increased 15% on a per-unit basis due to the lower volumes while treating and transportation expenses increased by 9%. These higher costs when combined with really weak commodity prices led the company to report an adjusted loss of $8.6 million, or $0.13 per share.

The company also didn't offer investors a whole lot to look forward to as it sees production continuing to decline in 2015 as second quarter production is expected to be between 57,000-60,000 BOE/d. Meanwhile, despite spending $350 million to drill new wells in 2015 Rosetta expects that full-year production will average 58,000-62,000 BOE/d, which again is down from its 2014 exit rate.

Now what: Due to the high decline rates of shale production Rosetta Resources faces an uphill battle just to keep its production flat. The company needs to spend a lot of capital to replace wells that are depleting, which makes it tough for the company to grow in a low oil price environment. That's why investors weren't all that thrilled with its report as the company hasn't been able to cut its costs to help offset weaker commodity prices, which is having a big impact on earnings and its ability to grow.