Please ensure Javascript is enabled for purposes of website accessibility
Log In Help Join The Motley Fool
Free Article
Join Nearly 1 Million Premium Members And Get More In-Depth Stock Guidance and Research
By Adam Galas – May 10, 2015 at 10:00AM

The oil crash has left many Big Oil dividend stocks undervalued. Learn why you must avoid one particular high-yield value trap, and which two companies represent better alternatives.

Oil prices have plunged 40% in the past year, inflicting serious damage on the stocks of Big Oil dividend payers including Petrobras (PBR 0.50%), ExxonMobil (XOM 2.18%), and Chevron (CVX 0.85%). 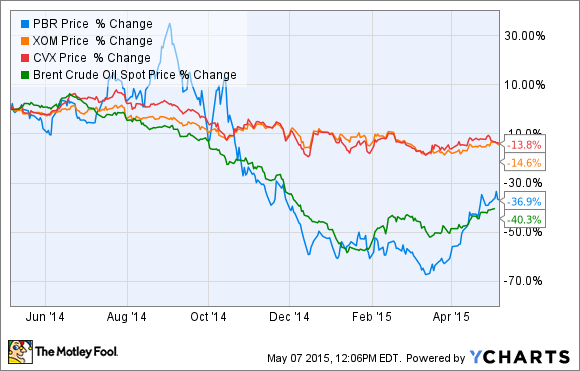 However, despite its share price falling the furthest, there are five reasons why long-term investors should avoid investing in the flailing value trap that is Petrobras: rampant corruption, enormous losses, outrageous debt, terrible capital allocation, and an abysmal dividend growth track record. Just to name a few.

Petrobras: Den of corruption
One of Petrobras' biggest problems is malfeasance on a grand scale. Over the past year the Brazilian national oil company -- the government owns 54% of shares -- has been roiled by the worst corruption scandal in the nation's history.

In November 2014, 23 high-profile politicians were arrested, with far more under suspicion of flagrant corruption that might rise to even the level of Brazilian President Dilma Rousseff, who is accused of skimming 3% of the company's contracts for herself.

All told, Brazilian prosecutors are investigating over 750 company projects, and in the third quarter of 2014 the company took a $2.527 billion writedown directly tied to corruption. The scandal has engulfed the company to such an extent that in February Rousseff fired Petrobras' entire management team.

Staggering losses
In the past two quarters Petrobras has written off over $19 billion -- including $16.7 billion in the fourth quarter alone -- 70% of which was tied to corruption-linked refining projects. This resulted in almost $12 billion in losses over that six-month period.

Compare this to Exxon and Chevron, which -- despite the oil crash -- recorded net profit of $8.4 billion and $3.8 billion, respectfully, over the same time period. Part of the reason Exxon and Chevron can generate large profits despite low oil prices is another major advantage they have over Petrobras: far more efficient use of capital. 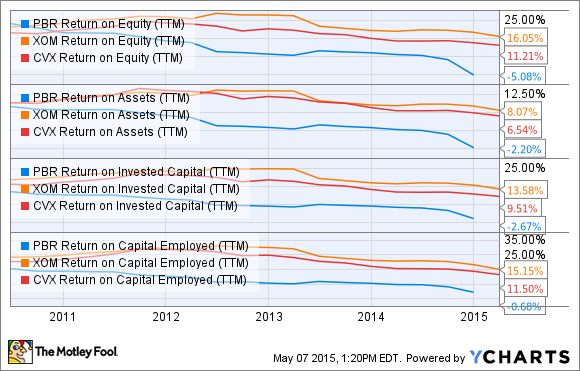 As this chart shows, not only is Petrobras far worse at allocating investors' capital -- not surprising given the billions of dollars lost to corruption over the years -- but over the past five years the pace at which its capital efficiency has declined has been far worse than that of either American company, despite oil prices that were at historically high levels of about $100 per barrel.

Monstrous debt load
Petrobras is the most indebted and least profitable publicly traded oil company on Earth, with total debt of $132.2 billion -- up 16%, or $17.83 billion, in the last year alone.

Compare that to Exxon's and Chevron's respective $32.8 billion and $27.8 billion total debt loads.

When you consider how much larger Exxon and Chevron are compared to Petrobras, the differences in debt is stunning. For example, look at these three companies' debt-to-market cap ratios:

Not only is Petrobras -- adjusted for relative market cap -- 16.2 and 23.3 times more leveraged than Chevron and Exxon, respectively, but up until recently the company continued to profligately borrow far more than its American competitors as it strove to invest $220.6 billion into growth projects between 2014 and 2018. 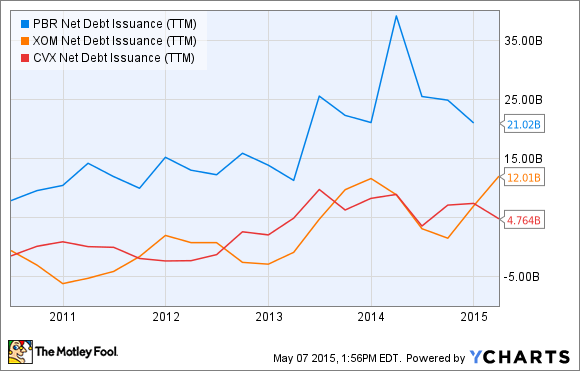 With oil prices so depressed, the company won't come close to achieving this goal because lending markets won't loan it that much. Indeed, management has announced that it would issue a new 2015-2019 investment plan that focuses on controlling debt, and could result in a delay of its annual dividend.

However, even if the company cuts its investment plan in half, its inability to allocate capital efficiently means it might destroy a significant amount of shareholder value.

Another problem with Petrobras' debt is that the company receives revenue in Brazilian reals, but 72%, or $95.2 billion, of its debt is in U.S. dollars, and 50% of its debt has floating interest rates. So a strengthening dollar effectively increases the cost of the company's debt and interest payments, as will rising U.S. interest rates. This will make it harder to improve the profitability of the projects that its debt is supposedly funding. 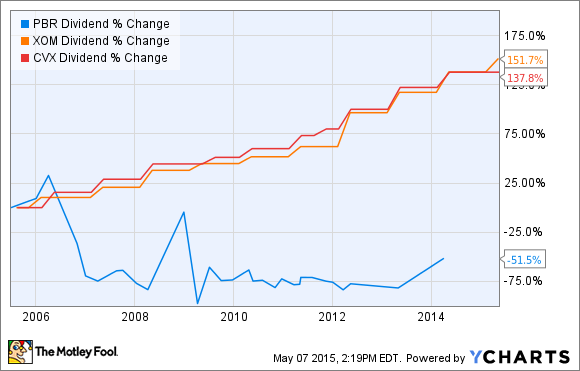 Studies show that consistently growing dividends can greatly help a company's long-term performance. Petrobras has a terrible track record when it comes to increasing its dividend, particularly compared to Chevron and Exxon.

The takeaway
With oil prices having plunged precipitously and in danger of remaining weak for years, I don't expect Petrobas will return to profitability anytime soon, particularly with the threat of future corruption related-writedowns looming. While speculators might be attracted to Petrobras as a short-term oil rebound play, for long-term income investors I think ExxonMobil and Chevron clearly make far better alternatives.

Adam Galas has no position in any stocks mentioned. The Motley Fool recommends Chevron. The Motley Fool owns shares of ExxonMobil. We Fools may not all hold the same opinions, but we all believe that considering a diverse range of insights makes us better investors. The Motley Fool has a disclosure policy.