Please ensure Javascript is enabled for purposes of website accessibility
Log In Help Join The Motley Fool
Free Article
Join Nearly 1 Million Premium Members And Get More In-Depth Stock Guidance and Research
By Anders Bylund – May 13, 2015 at 11:25AM

This just in: Frontier is not planning any huge dividend increases anytime soon, even if the company will have plenty of headroom for such a move.

Regional telecom Frontier Communications (FTR) reported first quarter results last week. The company missed analyst expectations on both the top and bottom lines, and Frontier shares fell as much as 10% the next morning.

But the headline numbers never tell the whole story. As usual, Frontier management sat down for a conference call with selected analysts where the executives shed additional light on the quarter.

Here are five of the most interesting points Frontier raised that night.

Where is this train going?
First is a high-level overview of what recently appointed CEO Dan McCarthy hopes to do over the next few years. Here is how McCarthy painted that picture:

Let me say a few words about my vision for Frontier.

First, retaining customers will be at the top of my list of priorities. The first step in growing our business is to retain our existing customers. We'll move to a more balanced approach to acquisition and retention, with a laser focus on retaining our customers.

Second, we will grow broadband market share. This will be in both the residential and commercial segments. We continue to focus on diversifying distribution channels and utilizing speed, simplicity, and choice to differentiate in our markets. We'll continue to invest in our networks to enable speed and capacity.

Third, commercial sales offers us growth opportunity. We've spent the last four years enhancing our network, adding partners and distribution channels, and upgrading our information systems. We are now poised to leverage all of these investments, and you have already begun to see the results in five quarters of SME revenue stability. This area remains one of our top opportunities, and we will continue to pursue it relentlessly.

And fourth, video in all flavors will be incredibly important to our success. Following the integration of the Verizon assets in 2016, we'll have close to 1.8 million video customers in all categories, more than triple our current number. This enhanced scale, together with exciting advancements in technology, will create tremendous new opportunities for Frontier.

To recap, McCarthy gives top billing to customer retention. Next, he will chase growth in the broadband market and commercial sales, while video services will also be crucial to future success.

If you will allow a quick anecdote here, I have never been a Frontier customer, but that will probably change when the Verizon deal closes. As a Verizon FiOS broadband subscriber in Florida (but that is about it since 2010), I am glad to see Frontier putting customer service first. The company is taking over a stable and mature Verizon service, at least in areas where Big Red has already rolled out fiber-based FiOS connections. The real test here will consist of not messing anything up when Verizon flips the switch in 2016.

What about the "exciting advancements in technology" that McCarthy cannot wait to exploit?

He is most likely talking about next-generation DSL protocols, known as G.fast. Under the right circumstances, the so-called VDSL2 lines that Frontier depends on today can deliver download speeds of up to 100 megabits per second, but real-world applications rarely reach these speeds.

G.fast, which is the next generation of twisted-pair copper cable broadband, uses a very different signal design. G.fast can match the gigabit speeds offered by fiber-optic services, albeit only at very short distances from the telco connection point and with technical challenges all its own.

The technology is just getting ready for its first production-level deployments, with large scale rollouts planned for 2016. That dovetails nicely with the expected closing of the Frontier-Verizon deal. If everything works according to plan, the second half of 2016 could become a tremendous growth phase for Frontier and its investors.

More on the Verizon agreement
McCarthy noted that Frontier has made "significant progress" on the Verizon deal. The companies are wading through paperwork at the federal level and across the three affected states. Indeed, the Federal Trade Commission fast-tracked the deal through the Hart-Scott-Rodino antitrust review process, closing that chapter ahead of schedule earlier this week.

In the words of the CEO, this deal is the pinnacle of "a fundamental transformation of Frontier that really commenced with our 2010 Verizon transaction." More specifically:

We see the Verizon acquisition as a transformative opportunity that will meaningfully enhance Frontier's long-term competitive position, diversify our business, and significantly increase shareholder value.

We estimate that the completion of this transaction will provide 35% accretion to levered free cash flow per share in the first full year and will improve our dividend payout ratio by an estimated 13 percentage points.

Trailing levered cash flow now stands at $0.64 per share. Boosting that crucial cash metric by 35% should give the board of directors a generous dose of headroom to lift dividend payouts as well.

McCarthy did not exactly phrase his analysis in this fashion. Instead, he focused on how much lower the dividend payout ratio will be, so this is not a guarantee of richer yields but still looks like one if you read between the lines. Keep an eye on cash flow and dividend payouts as the Verizon deal rolls through the closing process. 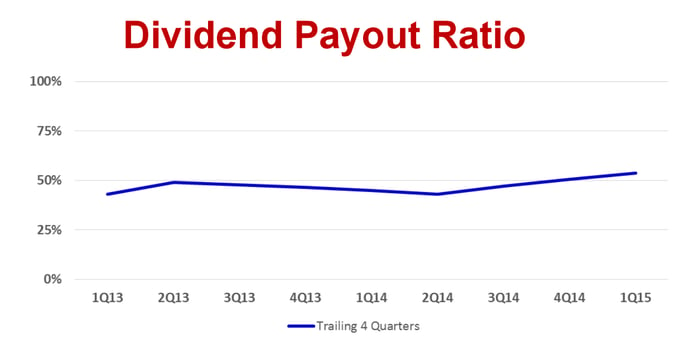 Connecticut update
The Verizon deal is not the first, as Frontier closed a similar but smaller wireline takeover two quarters ago, giving the company control over AT&T landline operations in Connecticut.

McCarthy gave investors some color on the progress of that integration, too:

Looking broadly at Connecticut, we completed our first full quarter of operations and took actions that we believe will promote our long-term success.

In the quarter, we allowed a significant percentage of Connecticut bundle customers who were no longer under contract to migrate to our current promotion. This is consistent with our normal practices but was not the practice in Connecticut previously. As a result, we did experience an impact in Connecticut residential revenue in the quarter.

In addition, when a customer's AT&T promotions were scheduled to expire, we chose to continue the promotional price in order to shield the customer from a price increase. As of the end of March, we have begun migrating these customers to market pricing, and we expect this to have a positive impact on average revenue per customer and residential revenues in Q2 and future periods. Our goal was to start our relationships with these customers on the right foot, and we believe it was the correct long-term choice for the business.

In other words, Frontier is bending over backward to keep former AT&T customers in the fold. The company is sacrificing short-term profits for a more loyal customer base, which looks like a smart trade-off.

But that is not always enough. Sometimes, subscribers get up and leave for various reasons -- some of which are beyond the company's direct control. 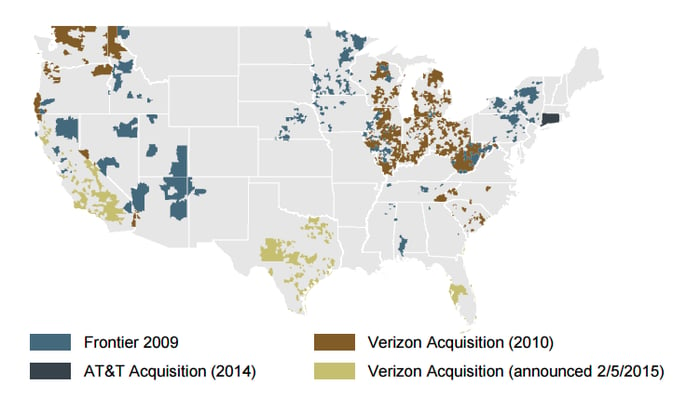 Big churn
For example, Frontier reported a slight uptick in customer churn during the first quarter. As McCarthy explained it, only some of these losses stemmed from Frontier's own mistakes. Elsewhere, bundle-sales partner DISH Network actually cost Frontier a few triple-play subscribers:

There were two different components really when you look at it, both around the video product set.

So in one case, we saw a number of DISH customers leave. They were really upset with, I think, the content disputes between DISH and some of the content players, and they opted for another provider who provided a triple play for them.

And then the part on our own system was really caused when we went through Connecticut conversion. We did have some hiccups that we talked about on previous calls. So, we had a slightly higher churn level in January and February. It really did mitigate quite a bit in March and has come down to normal levels in April.

As you might recall, DISH had a dust-up with 21st Century Fox during the winter. Many DISH subscribers lost access to Fox-owned channels, including Fox News and Fox Business. Fellow Fool Jamal Carnette walked us through the potential fallout from this dispute, which lasted for about three weeks.

Jamal did not tap Frontier as a big loser, but the dispute did some damage to the telecom. The satellite providers often partner with telecoms to create triple-play bundles, since copper lines originally meant to carry phone signals often cannot handle a serious TV service. This often works out well for both partners and also for their customers. But these partnerships can backfire, too. In this case, some Frontier/DISH subscribers who really wanted Fox News decided to take their business to a local cable option instead.

We repaid debt of $129 million in the first quarter. Frontier's capital allocation framework remains unchanged: investing appropriately in our network infrastructure and operations, supporting our current dividend, and utilizing excess cash generated to reduce indebtedness and our leverage ratio over time.

We are comfortable with our leverage levels and are committed to maintaining our liquidity along with a prudently managed balance sheet.

Again, these guys are not talking about upcoming dividend hikes. Instead, the focus is on supporting existing debt and managing the $9.5 billion long-term debt load.

That is understandable given the swirling maelstrom of big-ticket market buyouts. Managing the AT&T and Verizon acquisitions is a higher priority than returning oodles of cash to shareholders right now. Come back in a couple years, though, and things might be different.

That is, unless Frontier finds another opportunity to grow by acquisition before then. Stay tuned.