Intel plans to live up to its name by integrating FPGAs with its server CPUs.

As The Wall Street Journal predicted, Intel (INTC 0.89%) announced on June 1 that it would be acquiring FPGA vendor Altera (NASDAQ: ALTR). Intel is snapping up the company for $54 per share, which it plans to finance with a combination of cash on the balance sheet as well as debt that the company plans to raise.

After viewing the webcast presentation from Intel about the deal, I'd like to share with you Intel's reasoning behind picking up Altera.

Value creation in two parts
Intel provided a slide in which it claims this deal "creates significant value." According to that slide, approximately 60% of the value Intel hopes to create with this transaction will come from "product synergies" in data center-oriented silicon as well as in the Internet of Things.

40% of the value Intel expects this deal to create will come from "cost & manufacturing synergies." In particular, Intel expects operating expenses to come down (Intel CFO Stacy Smith indicated these operating expense savings would come mostly from SG&A rather than R&D), and it expects Intel's "manufacturing leadership" will help "improve existing Altera product portfolio and market segment share."

All told, Intel expects this deal to be accretive to non-GAAP earnings per share as well as free cash flow in the first year following the closure of the deal.

Integrating FPGAs on the same silicon as CPUs in the data center
Here's where things get interesting. According to Intel, as much as a third of cloud service provider servers will deploy FPGAs by 2020. Interestingly enough, last year, Intel announced it would be rolling out chips that integrate an FPGA and a Xeon processor on the same silicon package.

According to a blog post on Intel's website (written by Intel Data Center Group GM Diane Bryant), FPGAs can be used to accelerate some workloads by more than a factor of 10; by putting the FPGA on the same package as the Xeon processor, Bryant says an additional 2x speed-up is possible.

As you can probably guess, the next step after putting an FPGA on the same package as a Xeon processor is to actually integrate them into a single piece of silicon. And that's exactly what Intel says it hopes to achieve with its purchase of Altera in the data center. 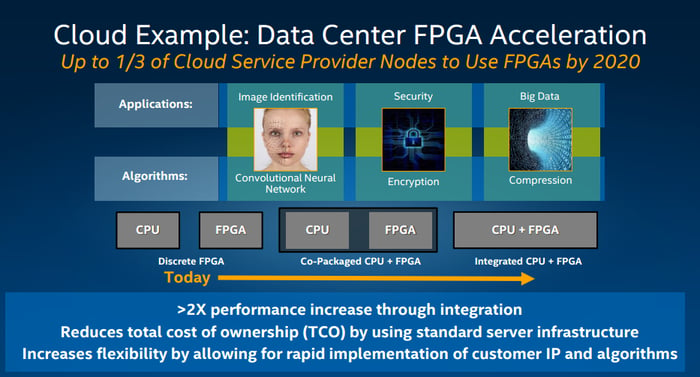 If I heard correctly, Intel executives said the co-packaged CPU + FPGA parts won't hit the market until some time in the second half of 2016. This means, given the relatively long design cycles for these chips, Intel may not release fully integrated single-chip CPU + FPGA solutions until the end of this decade.

Going after the IOT market, too
Another buzz word in the semiconductor industry is the "Internet of Things." Intel executives argued this acquisition of Altera will open up new opportunities in the Internet of Things for the company. 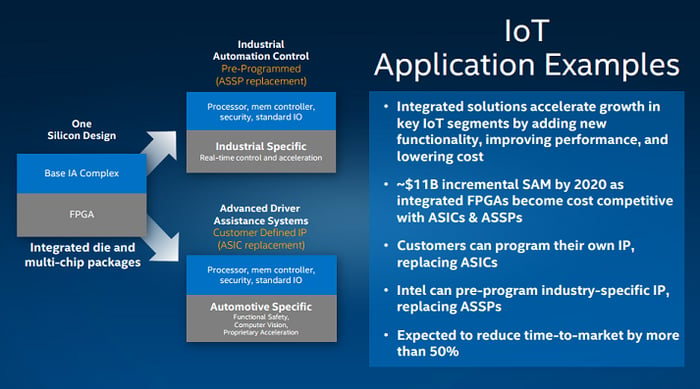 According to Intel, its purchase of Altera should open up an $11 billion incremental served addressable market by 2020. The integration of Intel's standard processor technologies with Altera's FPGA technologies should allow for faster time to market as well as more flexibility for customers, per the slide above.

An interesting deal, but it will take time for the benefits to be fully realized
Don't expect this deal to be transformative to Intel's product portfolio for a while; it'll take time to put together an integrated Xeon CPU with an FPGA. In the near- to medium-term, Intel gets Altera's revenue and profit streams, with the latter likely improving over time as the aforementioned "cost synergies" materialize.

Over the long haul, assuming this deal closes, Intel should be able to offer a very attractive line of integrated server CPU and FPGA products that should serve to expand its already sizable moat in the world of chips aimed at the data center.