Should Intel watch its back in the data center market?

The chipmaking industry was recently shaken up by two massive acquisitions. In late May, Avago Technologies (AVGO 2.52%) agreed to acquire Broadcom (NASDAQ: BRCM) for $37 billion. Avago develops analog and mixed-signal chips for automotive, industrial, and communications purposes, along with custom networking chips. Broadcom develops radios for cell phones and consumer devices, as well as chips for data center networking equipment.

Intel (INTC 3.21%), the current market leader in chips for PCs and data centers, subsequently bought Altera (NASDAQ: ALTR) for $16.7 billion. Altera develops chips that can be reprogrammed after a product has been shipped.

These chips, known as field programmable gate arrays, or FPGAs, are used on a wide variety of platforms, including consumer devices, cars, and airplanes. The acquisition was widely seen as a defensive move against the combined threat of Avago and Broadcom in the data center market and a way to expand Intel's Internet of Things business.

But just how much of a threat is Avago to Intel? Let's discuss where their businesses overlap, and whether Intel investors should be worried.

Intel and Altera were already partners, having merged Intel's Atom and Xeon CPUs with Altera's FPGA. On their own, Altera's chips are less powerful than Intel's, but their reprogrammability makes them more flexible. When combined with Intel's chips, Altera's FPGAs are expected to boost workloads and lower power consumption in data centers. This makes them attractive to data- and power-hungry companies such as Facebook, Google, and Amazon.com.

Several of those companies have already started using microservers -- cheap servers that employ low-powered chips to perform dedicated tasks such as loading the images of a webpage. Companies purchase microservers in "clusters," which lets them only buy the processing power they need.

Intel already has a strong presence in microservers with the Xeon E3, Xeon D, and Atom C2000 SoCs. But rival ARM Holdings (ARMH) previously declared that its licensees, such as Hewlett-Packard, could claim 10% of the server market by 2017 with microservers.

Acquiring Altera's FPGA tech helps Intel widen its defensive moat against ARM with power-efficient hybrid CPU-FPGA designs, which will likely be fused together on single chips in the near future. In the conference call to discuss the acquisition, Intel CEO Brian Krzanich said  that up to a third of cloud service providers could be using hybrid CPU-FPGA server nodes by 2020. Intel expects the entire FPGA market to grow at a 7% compound annual rate from 2014 to 2023.

Avago's data center strategy
Meanwhile, Avago started expanding into the data center market in 2013 when it acquired disk controller company LSI for $6.6 billion. To raise cash last year, Avago sold its solid-state storage controller business to Seagate or $450 million and the Axxia wireless networking chip business (which was part of LSI) to Intel for $650 million.

Avago used that cash to buy PCI-Express chip and switch maker PLX Technology, along with Emulex, a maker of Fibre Channel and Ethernet adapter cards. From Broadcom, Avago gains its Trident and Dune Ethernet switch chips, which control a dominant share of the data center switch chip market. Its investments in disk controllers, PCI-Express chips and ethernet switches give Avago the ability to sell data center solutions in bundles. 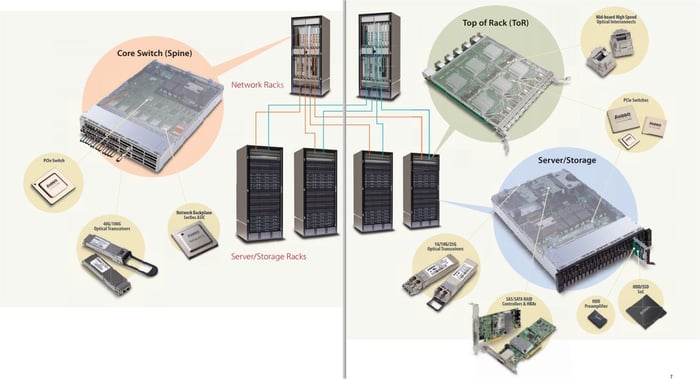 But the direct threat to Intel is Broadcom's interest in ARM-based server processors. Broadcom later this year is scheduled to release its Vulcan 64-bit ARM server processors, which will compete against Cavium's ThunderX, AMD's Opteron, and Qualcomm's upcoming ARM server chips.

By buying Broadcom, Avago becomes the third-largest chipmaker in the world by revenue after Intel and Qualcomm. If Avago and Qualcomm both invest heavily in ARM-based microservers, Intel's market share in data centers could suffer.

Should Intel investors worry?
I believe Intel investors don't have to worry about Avago disrupting the server market anytime soon. Avago has certainly gained ground in networking hardware and might establish a presence in ARM servers, but the overall market for ARM servers is still quite small.

Intel already has a presence in microservers, and the flexibility and power efficiency of Altera's FPGAs could further marginalize ARM's market presence.