Please ensure Javascript is enabled for purposes of website accessibility
Free Article Join Over 1 Million Premium Members And Get More In-Depth Stock Guidance and Research
By Lee Samaha - Jun 5, 2015 at 8:45AM

Relatively safe but with good long-term prospects, here are the four best stocks in the dental business.

The investment thesis behind investing in the dental business is simple. An aging Western population with better access to dental healthcare means many more teeth will need treatment in the future.

Moreover, increasing standards of healthcare in the developing world offer ample opportunities for the dental business abroad as well. Throw in the relatively recession-resistant nature of the industry and you have a bullish case for this business. So which are the best stocks to buy in the dental business?

Colgate-Palmolive's prospects are largely dependent on its ability to grow its business in developing markets. A breakout of the company's market share in toothpaste in various countries demonstrates its dominance in key emerging markets.

A look at of its pre-corporate cost operating profit in 2014 demonstrates the importance of its operations in Latin America and Asia. 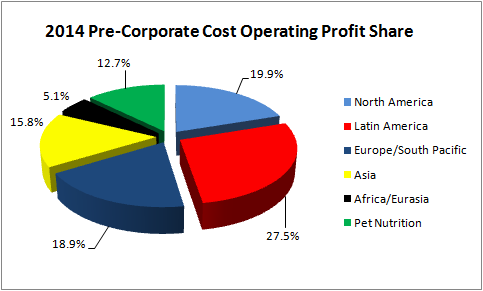 Source: Colgate-Palmolive Co. presentations. All regional figures are for its oral, personal, and home care units.

As such, Colgate-Palmolive is really a play on growth in developing markets and the company's ability to expand sales in areas such as toothbrushes (33.8% of worldwide market share) and mouthwash (16.5%).

As the following charts show, both companies grew revenue during the last recession, and they tend to convert more than 100% of net income into free cash flow. 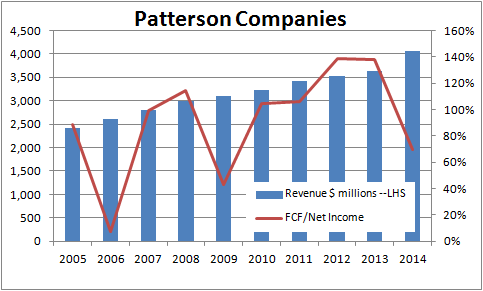 As such, both companies can be looked at as relatively recession-proof businesses with good cash flow generation properties. If you believe in the dental industry's long-term growth prospects, then they are well worth a look.

The growth candidate
Sirona Dental Systems, Inc. (NASDAQ: SIRO) represents the growth opportunity in the sector. The excitement for this dental equipment maker revolves around its CEREC CAD/CAM system, which enables dentists to perform same-day teeth restorations. Incidentally, Sirona's products are distributed by Patterson in the U.S. and by Henry Schein in Europe.

Sirona's growth can be a bit lumpy as it is somewhat dependent on the timing of new product releases. In other words, growth can accelerate as new CEREC or imaging systems are released, only to slow as they mature.

Indeed, analysts expect Sirona's revenue to decline 2.6% in its fiscal year ending this September, only to bounce back to 8.4% revenue growth in the year ending in September 2016.

As shown in the chart below, Sirona's revenue and operating income have grown strongly in recent years. 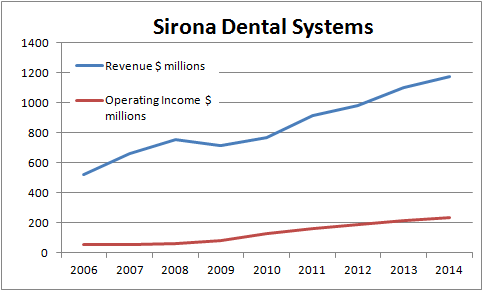 Sirona will aim to increase penetration rates of its CEREC CAD/CAM systems. With the growing number of older people in need of teeth restorations across the world, it will be more economically viable for dentists to acquire the CEREC system. That would be good news for Sirona.

The takeaway
Colgate-Palmolive represents the blue-chip way to play long-term growth in dental hygiene, with a particular focus on emerging markets. Patterson and Henry Schein offer investors strong cash generation and some recession proof characteristics -- never a bad idea in a long-term holding. Meanwhile, Sirona Dental Systems is a good way to invest in a growing proprietary dental technology play.

Is Colgate Palmolive a Buy?