Everyone knows Coke, Target, etc. But are you familiar with these three lesser-known habitual dividend payers?

Nearly every one of us, at some point or another, has encountered a Dividend Aristocrat. Whether we drink a beverage made by Coca-Cola, use a power tool made by Stanley Black & Decker, or purchase either at our local Target, we're conducting business with one of these companies.

What makes them aristocrats? They're three of the few companies on the stock market that have raised their dividends at least once annually for a minimum of 25 consecutive years.

Most of the aristocrats are familiar corporate names such as Coke or Target -- but not all of them. Here's a look at three that are more obscure to the general public, but no less generous.

1. Dover (DOV 0.26%)
Although it's not one of the more famous aristocrats, Dover is among the sturdiest. Its payout increase streak has been running for a hard-to-believe 59 years.

The company is an engineering conglomerate that divides its products and services into four operating segments: energy, engineered systems, fluids, and refrigeration/food equipment. None of the four produces exceptionally large amounts of revenue -- in the company's first quarter, the top line for the quartet ranged from $340 million to $573 million. That diversity, though, hedges against sudden shortfalls in one division.

For example, due to the sharp decline in crude oil prices at the end of last year (and subsequent pullback in capital expenditures by companies involved in oil exploration), the energy unit's first-quarter revenue dropped by 12% year over year to $420 million. But better performance from the three other units kept Dover's top-line decline to a less-severe 5%, to $1.7 billion. Meanwhile, the company always seems to find a way to make a profit; despite the first-quarter revenue slide, it netted nearly $210 million. In fact, it rarely ever posts a quarterly loss. 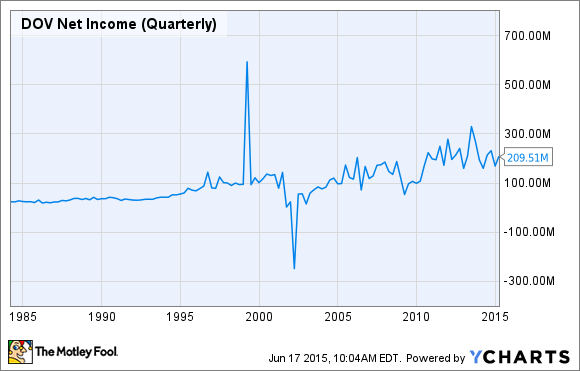 At the moment, Dover pays a quarterly dividend of $0.40 per share, which equates to a 2.2% yield at the company's current stock price.

2. Pentair (PNR 0.02%)
Elsewhere in the engineering hall of the aristocrats' club is this U.K.-based company, which concentrates on water flow technology. It has also blown way past the minimum quarter-century requirement for membership, having lifted its payout for 39 years in a row.

These aren't the best of times for Pentair. In its latest quarter it missed average analyst estimates for sales and net profit, both of which experienced notable year-over-year declines (bottom line was $114 million on nearly $1.5 billion in net sales).

Like Dover, Pentair operates four distinct operating units, and is exposed to the currently spending-adverse oil and gas industry. But unlike Dover, the unit that covers that business -- valves and controls -- is its largest in terms of revenue. As a result, it suffered the steepest (19%) year-over-year revenue decline of all the company's divisions.

But the world will always need water, and demand should rise for the technology that manages it -- particularly considering the drought issues that places like California and Brazil have faced lately. A recent uptick in U.S. water supply construction spending is indicative of this need, and could very possibly herald in a trend that will benefit Pentair. 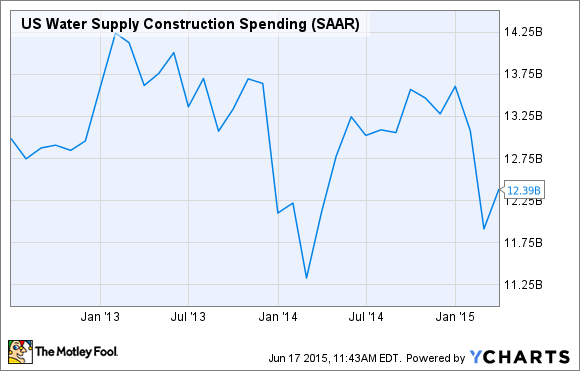 The company currently hands out a quarterly dividend of $0.32 per share, with a yield just under 2.1%.

3. Medtronic (MDT -0.96%)
Close behind Pentair in the dividend increase longevity race is this large medical devices manufacturer. It has raised its distribution for 37 years straight.

With its recently closed acquisition of Ireland-based Covidien, Medtronic is now the biggest pure-play medical device business on the market. In addition to a highly complementary product line, the Covidien deal brought a handy benefit to Medtronic -- it switched its headquarters to its new asset's base of Ireland, a move that should save it millions of dollars in tax expenditures.

Medtronic might not even need that advantage. For fiscal 2015, adjusted to include Covidien's results, the combined business grew revenue by 19% on a year-over-year basis to $20 billion. Net income was down but still landed well in the black, at $2.7 billion compared to 2014's $3.1 billion.

The medical supply business is a good one to be in thanks to the rapidly increasing take up of insurance due to Obamacare. Compounding this is the graying of the American population, with the vast baby-boomer generation entering its twilight years.

Medtronic is well positioned to take advantage of this, but one problem is that a lot of investors know it. As a result, the stock price has risen significantly over the past year. This has dampened the dividend yield, which is well below 2% these days. That said, given the above factors, the stock still has plenty of potential for growth. 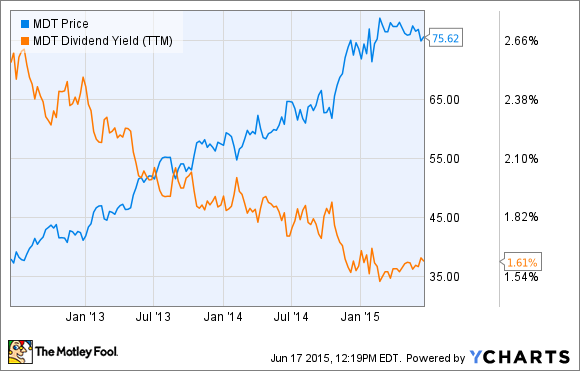 Pentair's quarterly dividend stands at just over $0.30 per share; that weakened yield is currently 1.6%.

Tax Inversions: Why Are They So Popular?