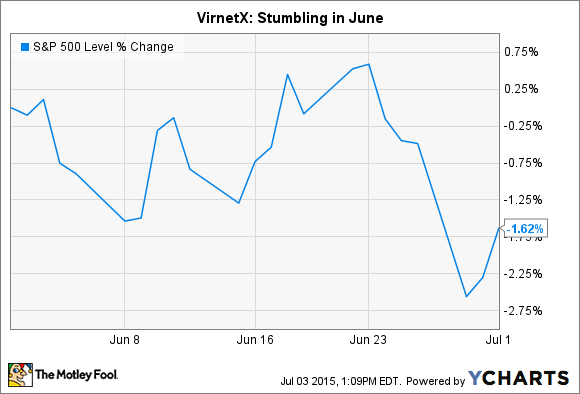 What: Shares of network security researcher VirnetX (NYSEMKT:VHC) fell 12.7% in June, according to S&P Capital IQ data. All told, the stock has plunged 23% lower year to date and a heart-stopping 75% over the last 12 months.

So what: The stock was not under the gun from analyst downgrades, management didn't issue any new press releases or SEC filings to test investors' patience, and June was actually a very quiet month for VirnetX. That very silence might hold the key to the price drop, however. The company signed a deal with patent licensing firm IPValue Management in June, and investors expected a stream of announcements regarding licensing wins to follow. But IPValue has remained silent on VirnetX patent deals so far.

Now what: In addition June was kind of grim for litigation-happy intellectual property firms like VirnetX.

The U.S. International Trade Commission on June 23 recommendedclearing two large tech companies of patent infringement charges filed by a competing company, setting the stage for a mild court decision in October. Patent licensing outfits such as VirnetX love to see quick and easy wins for the plaintiff in cases like these, so there's a potentially negative precedent in the making here.

That same week, the U.S. Supreme Court ruled that patent holders can't charge royalties when their patents have expired. VirnetX investors care, because one of the four key patents used in high-profile lawsuits was filed way back in 1999 and is on the cusp of expiration. The SCOTUS decision put some dynamite behind the expiring patent's ticking clock.

VirnetX doesn't have to take much action in order to lose value. The legal framework it uses to extract value from its patents is becoming less and less appealing, and the company is in desperate need of a big win -- and soon. A positive court decision would be nice, or perhaps IPValue can come through with a solid licensing deal that isn't directly backed by a successful lawsuit. Either one would work.

But you know what Kenny Rogers said about high-stakes gambling, right? "You gotta know when to fold 'em, know when to walk away." And the odds don't look good for VirnetX.