There are also milestone payments of up to $472.5 million collectively for the two lead programs, and AGTC will get royalties in the high-single digit to mid-teen percentages of annual net sales if the drugs make it to market.

For the three yet-to-be-developed gene therapies, two will be in the ophthalmology specialty, and one will come from elsewhere. Biogen is on the hook for milestone payments of up to $592.5 million across the three discovery programs, along with royalties in the mid-single digits to low-teen percentages of annual net sales. 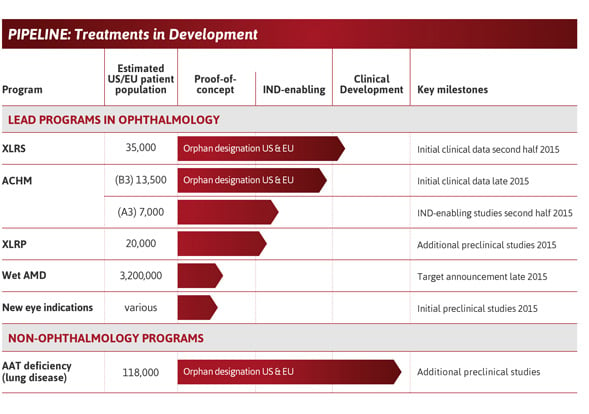 AGTC's pipeline. Biogen gains access to XLRS, XLRP, and three other treatments that might not even be on the chart yet. Source: AGTC.

While ophthalmology is a new area for Biogen, the biotech recently completed a phase 2 trial testing its anti-LINGO-1 drug in acute optic neuritis, or AON. The trial was arguably designed as a quick readout as to whether anti-LINGO-1 would work in multiple sclerosis -- both diseases have a lack of myelin on nerves, which anti-LINGO-1 seeks to reverse -- but if Biogen decided to pursue AON further, the experience with Applied Genetic Technologies could be helpful.

Jumping on the gene therapy train

Since the treatment of the "bubble boy" disease with gene therapy more than a decade ago, and subsequent discovery that it could lead to cancer in some patients, the gene therapy train has made all the stops. Fortunately, through the development of better delivery vectors, the train appears to be back on track and picking up steam.

In addition to its deal with AGTC, Biogen has bought a couple of other tickets for rides on the train.

In 2014, Biogen and Sangamo BioSciences signed a deal to develop treatments for sickle cell disease and the blood disorder beta thalassemia. Sangamo's technology -- zinc finger nuclease genome-editing -- is different than the gene therapies that use viral vectors to deliver whole genes to the cells, but they both change the genetic makeup of diseased cells.

Earlier this year, Biogen signed a deal with an Italian research institute, San Raffaele-Telethon Institute for Gene Therapy, to develop gene therapies for hemophilia A and hemophilia B. Biogen paid $5 million up front with the potential for undisclosed milestone payments and can take worldwide rights to the drugs after initial clinical proof of concept trials.

And it appears Biogen may be setting out to develop gene therapies on its own using AGTC's technology. Toward the end of the press release announcing the AGTC deal, the company said:

Biogen will receive an exclusive license to use AGTC's proprietary technology platform to make AAV vectors for up to six genes, three of which are in AGTC's discretion, in exchange for payment of milestones and royalties.

Risk-reward
Don't pencil in revenue from Biogen's gene therapy treatments just yet, though. While there have been some successes in gene therapy recently -- most notably bluebird bio -- there have still been plenty of failures.

Avalanche Biotechnologies tumbled last month after investors were disappointed with phase 2a data testing its gene therapy AVA-101 in wet age-related macular degeneration. And back in April, Celladon's Mydicar gene therapy failed a phase 2b trial.

But the risk is balanced by the huge potential rewards since a gene therapy is likely to be a cure, which will facilitate a large price tag. For investors interested in gaining exposure to gene therapy without exposing themselves to the risk of investing in a pure-play biotech, Biogen could be a good choice. Even if none of Biogen's gene therapies make it to market, the company has plenty of other drugs on the market and in development to deaden any negative news.