Please ensure Javascript is enabled for purposes of website accessibility
Log In Help Join The Motley Fool
Free Article Join Over 1 Million Premium Members And Get More In-Depth Stock Guidance and Research
By Demitri Kalogeropoulos - Jul 7, 2015 at 10:23AM

A new toy licensing agreement around the release of "Batman v Superman: Dawn of Justice" is good news for the company.

What: Toy maker JAKKS Pacific's (JAKK -3.28%) stock jumped 33% higher during the month of June, according to S&P Capital IQ data. 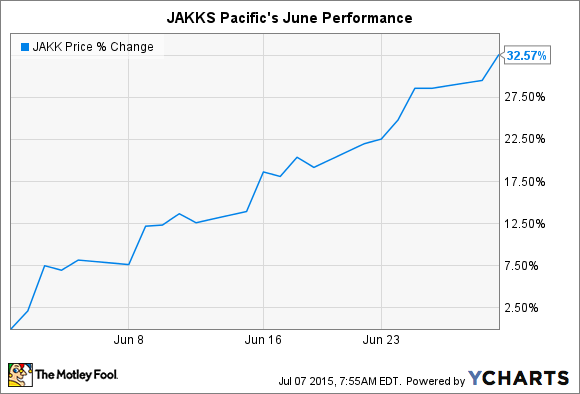 Investors are up a dramatic 70% from the 52-week low set in late January. However, shares are still 27% lower over the past five years.

So what: JAKKS' positive month began with news that private equity firm Oasis Management had accumulated a 12% stake in the toy company. According to a June 3 SEC filing, Oasis purchased more than 1 million shares between the end of April and mid May at prices ranging from $6.65 to $7.49 apiece.

Besides demonstrating huge direct demand for the stock, that news sparked optimism that JAKKS might make some shareholder-friendly moves in the near future. And sure enough, the company in mid-June announced a new share buyback authorization for up to $30 million, or better than 10% of its current market capitalization.

On the business front, JAKKS reached a new toy licensing agreement with Warner Bros in June around the release of Batman v Superman: Dawn of Justice. That film is likely to be a hit, and should deliver strong product sales for JAKKS next year. "We could not be more excited to be part of the eagerly awaited franchise and welcome the opportunity to bring to life two of the most epic Super Heroes of all time," executive John Blaney said in a press release. The license includes large-scale action figures and vehicles, accessories, games, wagons and more. JAKKS plans to launch its Batman v Superman: Dawn of Justice product line in spring 2016, coinciding with the movie's planned release, while new DC Comics product lines will be available at retailers later this year.

Now what: In the meantime, JAKKS' management is targeting 2015 sales of $735 million. While that's down from last year's $810 million haul, it should still power steady earnings gains for investors. Adjusted profits are expected to improve to $58 million from 2014's $53 million of earnings.

That profit gain shows that JAKKS has really turned the corner from a rough 2013 in which it booked a painful loss of $0.73 per share. Thanks in part to toy sales powered by Frozen, Wall Street is expecting the exact opposite result for JAKKS this year: Analysts see the toymaker earning $0.73 per share in 2015.

The End of Toys R Us Won't Be the End of Hasbro, Mattel, or JAKKS

Where the Toys Aren't

Why JAKKS Pacific Shares Were Sent to Timeout