Liquidity is paramount in the energy industry. Without it an energy company could be forced to scramble for cash at the worst possible time and therefore be forced to take less than ideal terms so it has enough money to pay its bills. It's a situation that could one day impact Southwestern Energy (NYSE:SWN), Range Resources (NYSE:RRC), and Cabot Oil & Gas (NYSE:COG) due to the fact that all three have dangerous liquidity ratios according to S&P Capital IQ data. The trio trail their natural gas peer group when it comes to both the quick ratio and the current ratio, which are key measures of a company's ability to meet its short-term obligations.

Both the quick ratio and the current ratio measure a company's liquidity by gauging its ability to meet its short-term obligations. The current ratio is measured by dividing current assets by current liabilities, with a ratio below 1.0 suggesting that a company won't be able to pay off its obligations without additional financing. A quick ratio, on the other hand, is measured by subtracting inventories from current assets and dividing that by current liabilities. Again, anything below 1.0 suggests the company doesn't have enough liquid assets to cover current liabilities.

When we do the math for Southwestern Energy, Range Resources, and Cabot Oil & Gas we get the following results. 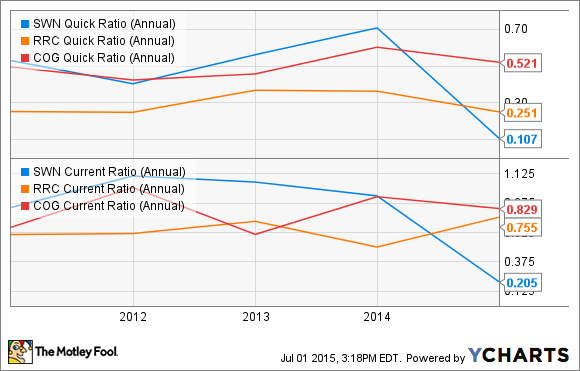 As that chart makes clear, all three companies have a current ratio and a quick ratio below one. That said, the trio have often had dangerous liquidity ratios due to the fact that all three rely on outside sources of liquidity to make ends meet, not because they are at risk of bankruptcy.

These credit facilities, which act much like a corporate credit card, are usually for short-term borrowings until the company gets outside capital to pay down its credit facility. These outside sources of capital include asset sales as well as debt or equity issuances. All three companies have used these outside capital sources in the past year. Range Resources, for example, recently issued $750 million of senior notes, which is used to pay down its credit facility to boost its overall liquidity. Likewise, Cabot Oil & Gas has also issued new debt in the past year to boost its liquidity as it raised $925 million last September. Meanwhile, Southwestern Energy has taken a different route as it has been selling off non-core assets to boost its liquidity. This past March Southwestern sold off its gathering assets in Northwest Pennsylvania for $500 million and will use the money to pay down its $500 million term loan facility when it matures in December. That same month Southwestern also announced the sale of conventional oil and gas assets in East Texas and the Arkoma Basin for $218 million, which it plans to use to reduce debt and therefore boost liquidity.

That said, the danger for these companies lies in the fact that they rely on outside capital instead of cash flow and liquid assets to fund their operations. The risk is that outside capital sources can dry up during a downturn, which is typically when these companies really need capital. This can force the companies to accept less than ideal terms, if capital is even available, just to improve their financial flexibility.

Investor takeaway
Stocks with dangerous liquidity ratios aren't necessarily at risk of going bankrupt, but they do have a tougher road to climb. It's why natural gas investors should keep an eye on Range Resources, Southwestern Energy, and Cabot Oil & Gas as their liquidity ratios are the weakest in the sector. Should trouble hit, these stocks could have to really pay up for liquidity.